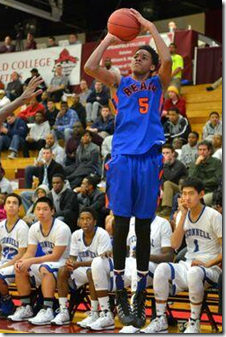 College coaches were only permitted one weekend of evaluation time this spring which meant that high school prospects had just three precious days to draw new interest. One player that seized that opportunity was class of 2015 guard Dejounte Murray.

A consensus four-star recruit and top-100 prospect, Murray is now firmly on Michigan’s radar after a big weekend in Sacramento. He provided a brief synopsis of his game during a phone interview on Thursday.

“I’d describe myself as a player that plays hard on both ends of the court. I like to make players around me better,” Murray said. “And I can score the ball whenever. I can shoot the ball, attack the rim, play above the rim, I love to defend and I’m an elite rebounder.”

Playing for the newly formed Northwest XPress AAU program – a combination of Northwestern powerhouses Seattle Rotary, ICP Elite, FAST and A-Plus – Murray finally has his opportunity to star on the Nike EYBL circuit.

“It was my first time playing in the EYBL,” Murray said. “I had seen it years ago when they first started it up and I always wanted to play in it and now I finally got a chance to  play in it. It was really nice and it’s all elite players from across the country.”

Murray didn’t disappoint in his first weekend of EYBL action. He averaged 17 points per game and shot 47% from three-point range while leading NW Xpress to a 2-2 record in Sacramento

“I talked to Coach Vall last night (Wednesday),” Murray reported. “We talked for about 40 minutes I would say and we just had a good conversation. He asked me about my grades and everything about me because it was our first time ever talking.”

The Wolverines don’t extend scholarship offers off the cuff like some other schools, but it’s clear that Michigan likes what it sees.

“[Jordan] told me that he and the head coach liked what they had seen in my leadership and that I’m one of the guards they want in 2015,” he said. “He basically said if they could offer me from just seeing me play, then they would have offered me last night, but the coaches like to get to know me more. He wants me to have a talk with the head coach and he should be calling soon.”

The 6-foot-5 guard isn’t an unknown commodity and has major interest from most of the West coast.

While the Seattle guard is far away from Michigan, he’s very familiar with the Wolverine program because of a mutual connection to another Seattle native, former Michigan guard and NBA Sixth Man of the Year Jamal Crawford.

“I know a lot about Michigan. My big brother went there, Jamal Crawford,” Murray said. “He went to Michigan and he always tells me a lot of good things about it. Evidently he didn’t play that much, he played a couple games and went straight pro, but I watched a lot (of Michigan) this year, last year and the year before. It’s a good program and they are used to winning and making the tournament every year. They have a good coaching staff every year.”

While Crawford and Murray aren’t technically related, they are close enough to refer to each other as brothers.

“I’ve been knowing him since I was little and I’ve been calling him my big brother for the longest,” Murray explained. “He calls me little brother and we’ve got a good bond. We talk every day and we’re just close like brothers.”

Murray plays for the same Seattle powerhouse where Crawford once dominated, Rainier Beach. The program hasn’t fallen off much in the last decade, winning its third consecutive state championship this year and going undefeated against teams from Washington.

“It went really well. We came up short at the Dicks Sporting Goods Invitational and lost our first round to Findlay Prep,” Murray said. “But we went undefeated in state and won our third straight title in a row.”

John Beilein is set to follow up with the talented youngster in the coming days. The next step could be a visit, something that Murray said he was open to and hopes to discuss with Beilein on the phone.

“When [Beilein] gets back, he’s going to call me and we’re going to set all that type of stuff with my visit and try to get out there.”

Seattle is over 2,000 miles from Ann Arbor, but Murray isn’t worried about traveling far from home.

“I’ve been traveling since the third grade with AAU ball,” he said. “I seem to not get home sick and stuff. I’ve been on the East coast a lot, the West coast because that’s where I’m from, the South a lot and I don’t get homesick. So it doesn’t really matter where I’m at, I know I’m going to play my game wherever so it doesn’t matter.”

Murray is likely to be a hot commodity throughout the summer, but he has a pretty good idea of what he’s looking for in a school.

“I’m just looking for a great program, great coaching staff, winning program, a good academic school and that’s about it. I hope I  can come in and play right away, I know nothing will be given to me, but don’t want to come in and be on the bench my freshman year.”