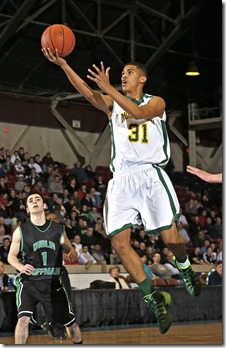 Seth Towns is no stranger to Ann Arbor.

By his count, the Columbus native has made eight or nine visits to Michigan over the past couple years. Towns has traveled to Michigan for football games, basketball games and camps and grows more familiar with the University of Michigan with each visit.

On Friday he made another trip to Ann Arbor for his first complete unofficial visit. Instead of being a guest at a basketball game, Towns was the sole focus of the Michigan basketball staff for four hours. The visit was heavy on academics and and a full campus tour with the Michigan staff.

“We were there for about four hours and at least three of the four hours were just talking about academics,” Towns said in a phone interview on Saturday. “Just going through what my interests are academically – engineering. I’m really interested in that right now so we went to the engineering department and we went to the business school which is top-five in the country, the law school which is really prestigious.”

After touring campus, the visit evolved into a basketball discussion as the Michigan coaches sat down with the 6-foot-7 forward and told him how he would fit into the program.

“We went all through campus and then after that they took me into this little room and talked about where they see me playing at their school,” Towns said. “They kind of related it to what Caris [LeVert] did – playing a lot of every position. I might be able to do a little more (than LeVert) just because of my height and I could be playing all kinds of different positions.”

Towns added that he doesn’t see himself in any certain role at the next level.

“I don’t really know,” he said. “Wherever coach wants me, probably around the the three or a stretch four maybe. ”

From there, Towns met up with Caris LeVert and Derrick Walton at Chipotle before heading home after another successful visit – one that he called his best unofficial visit yet.

The visit was especially important for Towns because it might have been the most important step yet toward a coveted scholarship offer on June 15th – the first day Michigan offers sophomore prospects. An unofficial visit with a full academic tour is a prerequisite for an offer, and Towns just checked that off his list.

Michigan likes what it sees in Towns – a versatile forward that can play a number of positions – and has prioritized him on its 2016 recruiting board. Towns described his game’s versatility, something that fits in line with Michigan’s recruiting mantra.

“I’d probably say I’m one of those do-it-all guys that can put it on the floor, can shoot it and work hard every possession,” Towns said. “I play really good defense, play really hard defense, but I really like to shoot the ball and make plays for my teammates.”

While his jump shot has always been regarded as his strength, he’s working to prove that there’s more to his game.

“(I’m working on) Driving and going up strong,” he said. “I was probably classified as more of a catch-and-shoot guy last year, but recently I’ve been able to create my own shot a lot more and take it to the rim.”

The Wolverines are in the driver’s seat in Towns’ recruitment – something he’s not afraid to admit – but there are other suitors as well.

“Michigan is definitely at the top,” he said when asked what schools were actively recruiting him. “And then there’s Stanford, Harvard, Princeton, other Big Ten schools Ohio State, Wisconsin, Iowa, West Virginia, Virginia Tech, Dayton and Xavier.”

Towns loves Michigan’s offense and the freedom it allows its players to simply make plays.

“I really like their coaching style and playing style,” he said. “How it’s a really spread out offense and the players — it’s not like a Princeton offense where it’s ran through (set motion and cuts) — they have freedom and they like being able to get out on the floor and show what they can do. It’s kind of like an NBA style team. I really like that aspect.”

Michigan might be at the top of his list, but Towns admitted that he grew up a die-hard Ohio State fan.

“Oh yeah… My whole room, until last year or so, was all covered in Ohio State stuff,” he said. “I’ve been an OSU-maniac for I don’t know how many years — ever since I was born. Honestly, it’s kind of weird but it takes some getting used it.”

While Towns grew up a Buckeye-fan, Ohio State hasn’t prioritized him in its recuriting efforts.

“Not too hard,” he said when asked how hard the Buckeyes were pursuing in. “But they’ve been showing a little interest.”

Towns wouldn’t be the first Columbus native to make the trip North to Ann Arbor and he wouldn’t be the first one from his high school either. Trey Burke walked out of the doors of Northland High School in 2010 and traveled straight to Ann Arbor – leaving as a lottery pick and National Player of the Year. Towns still keeps up with Burke and knows all about his development.

“He just came back to Columbus about a week ago and we had a little conversation about me getting stronger as a player,” Towns said. “He talked about the difference between college level and the NBA level and the speed of the game.”

Towns doesn’t know when he’d like to make a college decision, reporting that he’s just “taking it all in at the moment.” But the next step in his recruitment will be another trip to Ann Arbor.