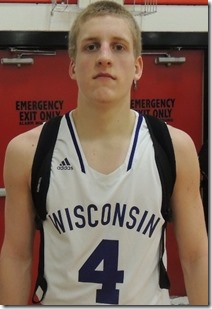 Brevin Pritzl drew headlines at the Spiece Run-n-Slam after he had 41 and 37 point performances in front of dozens of national and regional scouts. College coaches weren’t allowed at Spiece, but word travels fast and Pritzl has seen his recruitment expand in recent weeks.

Despite the attention, Prtizl remains unfazed.

“I guess you could call it blowing up,” Pritzl answered when asked if his recruitment had blown up this spring. “But to me it’s just playing basketball and winning games.”

He did admit that some new schools have shown interest.

“Michigan is new to me,” he said. “And schools like Texas have contacted me so I’ve got a couple new schools contacting me and that’s kind of interesting.”

Within a week of the Wolverines reaching out, Pritzl was already on campus for an unofficial visit on Sunday. A trip that Pritzl enjoyed as he started to get familiar with Michigan and its staff.

“I thought it went well,” he said during a phone interview Sunday night. “I really liked the campus, it’s kind of centered around one area and then the athletic facilities are on the other side which is really cool. It’s not a long walk from any part of the campus to another part so I liked that about it. It looks old, but it had newer age things on the inside which I think is really cool.”

Pritzl’s described his game and how he might fit at the next level.

“I would describe my game as a scorer,” he said. “I mean I shoot well from outside and off the dribble, but I also like to mix it up with the big guys in the post and drive it and stuff like that. I’m relatively athletic on the side, so that helps.”

Sound familiar? Pritzl admitted that he sees similarities between his game and former Wolverine Nik Stauskas.

“I would fit probably a little more like Stauskas where I could shoot,” he said. “That’s probably who my game most closely resembles out of who they have. I’m not quite at that level of how good he is, but that’s probably the best way I could describe my game.”

Pritzl had the opportunity to sit down with Michigan assistant coaches LaVall Jordan and Jeff Meyer during the visit.

“I met Coach Jordan and Coach Meyer,” he said. “Coach Beilein was out of town, but I had the chance to sit down with them and talk.

“(They told me) how my game would fit in with what their system is and about different things that they work on in practices, their facilities and academics.”

The discussion about facilities hit home with Pritzl.

“Definitely looking at the practice facility and stuff like that (was my favorite part),” he said. “The way they have it setup along with their strength and conditioning room is really nice. “

Pritzl listed offers from UW-Green Bay, UW-Milwaukee, Toledo, Drake, Lehigh, Bucknell, Northern Illinois, South Dakota State, North Dakota State, Davidson, Creighton and Xavier. But right now three schools have been recruiting him the hardest: Creighton, Xavier and Wisconsin. The Badgers haven’t offered yet, but Pritzl talks with them often “to get a feel for things” and is planning another trip to Madison on Tuesday. He’ll also visit Marquette on Thursday.

Despite Pritzl’s growing recruitment, he knows what he’s looking for and he has a plan.

“I want to wait until after the July live period and take a couple of visits in August, then commit in September,” he reported.

When he makes his decision in August, he’ll be looking for two things.

“I really want a place with good academics and good history of the program.”