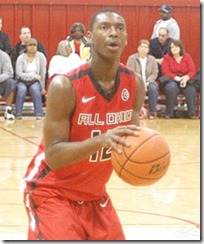 put together another big weekend in Dallas during session two of the Nike EYBL circuit. All Ohio Red went 3-1 in Dallas to move to second in its division.

Coleman had games of 23 points, 24 points, 7 points and 14 points on the weekend. He posted a 69 eFG% over the weekend and connected on 10-of-20 three-point attempts as he continued his impressive early play with All Ohio Red.

Coleman’s teammate, Esa Ahmad, was also impressive. He averaged 13 points, 5.5 rebounds and three assists per game with a 48.7 eFG% and was 8-of-20 from long distance.

Ahmad reported that he plans to visit Maryland and West VIrginia next weekend before the next EYBL session in Hampton, VA. He’s also expected to visit Michigan some time in the next month or so.

Coleman drew praise as one of the best guards at the event by D1Circuit:

Another player who took a weekend to adapt to the rigors of the EYBL was Jalen Coleman. In the second session, the 6-foot-4 Coleman absolutely lit it up on Saturday. He scored 23 points against The City Rocks and followed it up with a 24-point outing against the St. Louis Eagles. His 67% field goal shooting in Dallas should be a good indication of what kind of scorer Coleman is.

Future 150 was impressed by Esa Ahmad.

Esa Ahmad, 2015 PF, All Ohio Red: Ahmad first showed off his improved perimeter game at Real Deal in the Rock about a month ago, and it was on display again on Saturday. He put the ball on the floor and powered through defenders to finish at the rim. His improved game has turned him into a match up nightmare, and he will be rising in the updated rankings.

Eron Harris took his first visit since decommitting, making a trip to Purdue on Tuesday. Harris was impressed with the visit.

“I just went up there for a couple hours. “It was cool. I learned some thing about Purdue that I didn’t know.”

“They wanted me there,” Harris said was Purdue’s message yesterday. “It’s the same as everyone else’s right now. At this point in my career, everyone is telling me the same thing.”

Harris is expected to release a list of finalists in the coming days and Michigan should be in good position to make the cut. Harris has heard from schools all across the Midwest including Michigan, Michigan State, Indiana, Purdue, Kentucky, Ohio State and many more.

Caleb Swanigan is officially a member of the class of 2015. Rumors had been swirling for the last couple weeks that Swanigan was considering making the shift and he made the move official on Monday.

Swanigan updated his recruitment at Spiece two weekends ago, and spoke on Michigan’s recruiting effort.

“Michigan, they say they like me,” Swanigan said. They have a policy where they don’t offer until after your sophomore year because of grades and things like that, but they’ve been recruiting me pretty hard.”

Swanigan is now a rising senior, not a rising junior, so he would be eligible for a Michigan offer — although his sophomore grades are likely a prerequisite. Arizona and Xavier already offered Swanigan since he switched classes, according to his Twitter account.

Swanigan has been a dominant force on the EYBL circuit this summer and he drew praise from ESPN in Dallas.

Caleb Swanigan: After two EYBL sessions and eight games, Swanigan leads the league in rebounding, grabbing 11.2 boards a game. This front-court post has outstanding hands, power and determination to rebound inside his space and to go outside his area to take the ball away from his opponents. His inside game is very impressive and he scores with the jump hook from either hand and defenders must respect his jumper out to the high-post area. Kentucky, Louisville, Michigan State and California have been made their presence early.

Class of 2016 guard Eron Gordon has added recruiting interest from Duke, Kentucky and Kansas. He updated his recruitment in a video interview with Justin Albers of AllHoosiers.com.