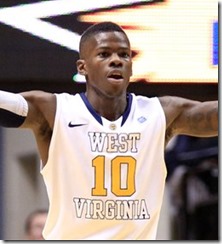 West Virginia transfer Eron Harris has trimmed his list to three schools: Purdue, Michigan and Michigan State. Harris confirmed to the Indy Star’s Kyle Neddenriep that those schools are “basically” his top three.

“Those are my top three, basically,” Harris said of Purdue, Michigan and Michigan State, adding that he’s still hearing from a few other schools, including Auburn and Indiana.

Harris, who shot 42 percent from the 3-point line as a sophomore, will have to sit out the 2014-15 season per NCAA transfer rules before having two years of eligibility.

“I’m not trying to make it too complicated this time,” Harris said of his recruitment. “There’s not going to be a lot of outside influence, because it’s all about me finding the right situation at the end of the day.”

“I learned some new things about Purdue,” he said. “They basically let me know they wanted me and that is a good feeling. But I’m still planning to get to Michigan and Michigan State both. Their schedules and my schedule haven’t matched up very well, but we’ll work something out.”

Harris averaged over 17 points per game as a sophomore for West Virginia last season and is considered the best transfer available at this time. Harris was one of the top shooters above the break and off-the-dribble creators in the country last season.