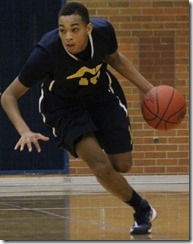 Michigan extended a scholarship offer to class of 2015 guard Eric Davis on Thursday evening during an unofficial visit to Ann Arbor. The news was first reported in a tweet from his high school coach and confirmed by Davis via text message.

Davis is a four-star prospect and ranked in the top-40 nationally according to 247Sports Composite rankings.

Davis has previously visited Michigan multiple times for basketball and football games, including the Notre Dame football game last fall that he called “one of the most fun nights ever”.

Jalen Coleman and Jalen Brunson are the only other prospects that Michigan has offered in the class of 2015.