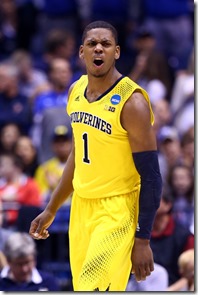 Two of Michigan’s NBA-bound sophomores sat down with NBA TV last night to answer some questions about the draft process, their time at Michigan and what they hope to prove during pre-draft workouts. We’ve transcribed the interview below.

On the decision process to go pro:

Nik Stauskas: “For me, obviously the one thing that played in my mind was just thinking about we the kind of team that we would have coming back if we all decided to come back I feel we could have competed for a National Championship. That was difficult to think about, but when I heard from the advisory board and spoke with a bunch of agents I just felt like this was the right time for me. I feel like my game is ready, I mature a lot over the last two years and I just feel like it was the right time and I’m really excited to take that step.”

Glenn Robinson III: “Along with Nik, I believe that it was tough to leave our teammates that we’ve been surrounded by for two years and the class that we had. When we were incoming freshmen people were calling us the Next Fab Five and we had a lot of hype around us.To be with those guys, we really bonded and we created something special and along with what he said I felt it was the right time for me having gone through the process last year trying to make that decision, I felt like I was more mature this year and really stepped up and had an advantage in talking to my dad about his opportunities and the things he went through. I just thought it was the right time.”

On what they hope to prove in Pre-Draft workouts:

GRIII: “I want to show my overall skill set. That’s tough to find now a days: a player that can do it all. That’s really something that I like to improve on and showing my defense, offensive skill set and athleticism. I think I can do that.”

NS: “For me I just have to prove to people that I can guard other twos at the next level.I feel like offensively I’ve shown a lot of what I can do. I feel like offensively I want to show people that my ball handling ability and play in the pick-and-roll, but once I show I can really defend at the next level (against) two guards that’s going to separate me from other people.”

On advice they received about the combine:

NS: “Obviously this means a lot and the main thing for me I heard in the interviews was to just be yourself. Just be who you are and be true to yourself and I feel like other than that I’m just trying to have fun here and enjoy this whole experience. You know you only go through it one time so I’m just trying to take it all in.”

GRIII: “I’m enjoying every moment of it.You can’t get it back like Nik said and as far as interviewing and this whole process I think its going to be an exciting time because it can either separate you or hurt you but I feel like if you stay true to yourself like Nik said and be who you are and don’t make up things or lie then you have nothing to worry about.”

On proving he can play the two or three:

GRIII: “Definitely. that’s something I really know I can do. I’m going to have to show it to other people because I really did play the four in college. That’s what the team needed me to do and fortunately enough we made it to back-to-back Elite Eights and we had the most winningest two years out of Michigan history. that’s what I had to do for the team but now its time to step up and do things I know I can do.”

On playing the two-guard at the next level:

NS: “The main thing for me is just tightening up my handle. I feel like at times this year I’ve been a little loose with my handle and losing control of it. I’m just trying to keep the ball as tight as I can and get a lot quicker. For me its been a lot of shooting off the dribble – I think that’s going to be a key for me because I know I can catch and shoot already. The more lethal I can be off the pick and roll and being able to pull up and make those different kind of decisions I think that’ll help me moving forward.

On who wins in a shooting contest with Doug McDermott:

NS: “I’m going with myself on that one. I can’t go with him, but he’s a great shooter.”

NS: “Maybe. We go at it a lot, some days he wins, some days I win. He’s a great shooter, great kid as well, he’s got a bright future going forward.”