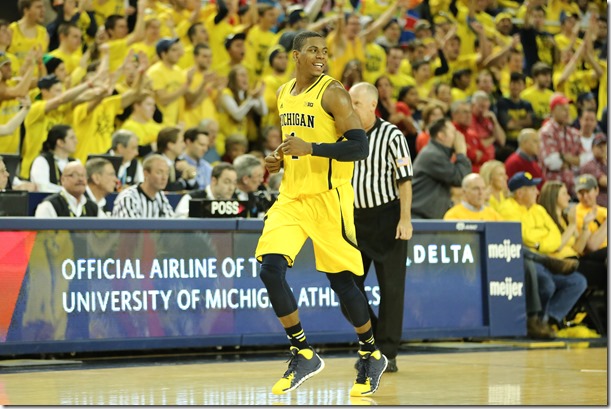 The NBA Draft Combine began in Chicago on Thursday and a number of Michigan players were in attendance. Glenn Robinson III was a full participant, Nik Stauskas attended but didn’t participate in basketball drills while Mitch McGary opted to sit out the entire combine.

One of the biggest questions facing Glenn Robinson III is how well he can shoot it at the next level. Robinson took a big step toward answering those questions when he shot 31-of-50 during the spot-up shooting portion of the NBA Draft Combine.

Robinson’s 31 made spot-up jumpers were best among small forward prospects. He was also 16-of-18 on off-the-dribble jumpers and was 25-of-39 when shooting on the move from 15-feet.

Robinson met with Detroit, Orlando, Dallas and Oklahoma City in Chicago and was scheduled to meet with six additional teams on Thursday. He told reporters that his projected draft range is 20 through 40, but that he was told last year he could have been a top-15 pick.

Fox Sports’ Reid Forgrave tweeted that Robinson was one of the big surprises of the combine among scouts in attendance.

Stauskas emerging as a point guard

Nik Stauskas has also been a busy many in interviews. He met with Sacramento, Minnesota, Phoenix, Detroit and Oklahoma City on Wednesday and Memphis, Milwaukee, Boston, Golden State, Toronto and San Antonio on Thursday, per Brendan Quinn.

ESPN’s Chad Ford wrote earlier in the week that Stauskas could be moving up the draft board because of his point guard skills.

Stauskas is making a play to be more than just a shooter, and the early returns look really good. He was absolutely terrific in the ballhandling drills he was put through on Tuesday.

Stauskas told me he grew up playing point guard until a late growth spurt moved him to the 2. While he wasn’t a primary ballhandler at Michigan, he showed the ability to initiate the offense this past season. Based on what I saw in drills, I think he’s got a chance to get into the conversation with Marcus Smart and Tyler Ennis. He isn’t a pure point guard, but neither is Smart. And his ability to shoot off the bounce means he’s going to have the ball in his hands a lot, regardless of what position he plays.

We have Stauskas ranked No. 12 on our Big Board, and if teams are convinced that Stauskas can play some point, he could end up passing Ennis on draft night.

Stauskas didn’t participate in drills at the combine, but his ability to play point guard was the buzz throughout the day during interviews. Stauskas has always had great ball skills and a knack for playing the pick-and-roll, he says his primary focus is tightening up his handle and improving his defense.

Physical measurements are a big part of the Draft Combine and Robinson and Stauskas both measured out fairly well.

Robinson neared 6-foot-7 with shoes and posted an impressive 6-foot-10 wing span. Robinson hopes he can break the combine record for vertical jump on Friday.

Mitch McGary didn’t attend the combine, but he did speak to Mark Snyder of the Detroit Free Press in his first interview since his declaration.

McGary is still not 100% while recovering from back surgery.

McGary discusses much more including whether he regrets returning for his sophomore year, his lowest point after the surgery and his recovery.

McGary’s roommate during workouts has been Doug McDermott, who has served as a bit of a mentor to McGary. McDermott reported McGary is still trying to get back into playing shape and hasn’t been involved in much live action.

“Not a whole lot,” McDermott responded when asked how often McGary played.

“He’s trying to get back in shape because he took a year off, basically,” McDermott added. “He’s really trying to get into physical therapy, not as much one-the-court stuff, but doing certain (physical training) and underwater stuff to get that back feeling good.”