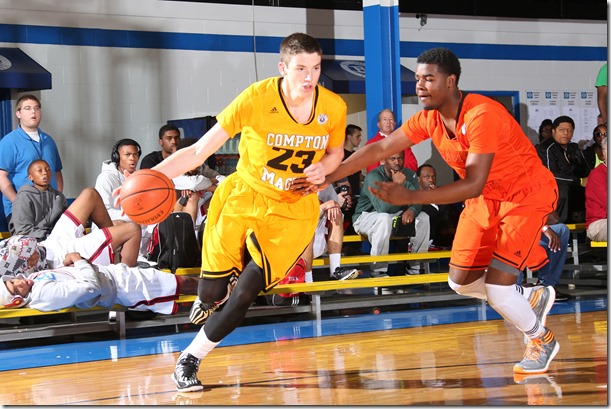 INDIANAPOLIS, Ind. — TJ Leaf traveled close to 2,000 miles with his Compton Magic AAU team to Indianapolis for the second session of Adidas Gauntlet over the weekend, but in a way he was closer to home.

Leaf’s family is from the Indianapolis area — his father played basketball at Evansville — and two of the four schools recruiting him that hardest happen to the be in the Midwest. Leaf is particularly drawn to the attention that basketball has in the area.

“Basketball is a lot crazier out here than it is on the West coast,” Leaf explained on Saturday. “Every gym is packed and people want to watch basketball. On the West coast it’s a bit different, sometimes you don’t get full arenas.”

Leaf’s affinity toward the Midwest helps explain why two of the four schools recruiting him the hardest – Arizona, Indiana, Michigan and UCLA – happen to be in the region. The 6-foot-10 forward also feels that the Big Ten is the best basketball league in the country.

“In my opinion (the Big Ten) is definitely the best conference in the country hands down,” he said. “To play in that would be great. All my family is from back here so its almost like coming home a bit too.”

While Indiana has been proclaimed as Leaf’s leader for some time, he reiterated that he’s open to all suitors.

“They’re obviously up there,” Leaf said of Indiana. “They are a great program, but I mean at this point I’m not leaning anywhere. Anything that comes up is great but I’m blessed from all the schools that are recruiting me thus far.”

One of those schools is Michigan, where Leaf will take his second unofficial visit on Monday.

The Leafs were originally supposed to stop at Bloomington on Sunday, but were that visit was nixed due to a NCAA rule that prohibits visits the same day of an AAU tournament. Leaf previously visited Michigan for a football game in the fall and this trip will be more about academics and a full one-on-one trip.

“I’m just looking forward to seeing the program,” he said. “Talking to the coaches a little bit, going around campus and seeing where I fit in there.”

Leaf is most impressed with Michigan’s player development and just how he would fit in the Wolverine offense.

“They get guys in and they make them tremendously better in one or two years,” he said. “So they obviously have something working there. They are a very successful program and I think I fit in very well with their wing position.”

Leaf projects as a stretch four or a big three at the next level – a role that he embraces and one that would fit perfectly in Ann Arbor.

“A combo forward,” Leaf said when asked what position he would play at the next level. “A three/four or a four/three that can shoot it, get out on the wing in transition.”

College coaches see him in a similar light, and the four position in Michigan’s offense is widely regarded as a wing position. Michigan has played four perimeter players throughout John Beilein’s tenure and Leaf would be possibly the biggest and most versatile option he’s had at that position.

Wolverine assistant coach LaVall Jordan has been Leaf’s primary contact, but John Beilein has started to have conversations with Leaf’s father in recent weeks. After his second trip to Ann Arbor, the 6-foot-10 forward should be a shoo in for a Michigan offer on June 15th – the first day the Wolverines offer 2016 prospects.

But the other schools on his list have also made an impression, notably Indiana.

“Obviously they are a very historic program,” Leaf said of Indiana. “They are always good and it’s just a program where you can get better.”

Arizona and UCLA have made an impact on the West coast. Leaf visited UCLA for its game against Arizona during the season and was impressed with the atmosphere. He hasn’t made a trip to Arizona yet, but both programs are making an impact.

“They are powerhouses,” Leaf said of Arizona and UCLA. “I like the way they are recruiting me. I’m a big fan of both, how they play, how they run, how the coaches let the wing players play.”

For now, Leaf is focused on improving his game. In Indianapolis, he demonstrated flashes of the what makes him so coveted by college coaches. He has a sweet shooting stroke beyond the arc, can handle the ball and attack and has the athleticism to finish above the rim.

Despite his strong play this spring, there have been some growing pains for the Compton Magic, who went 1-3 in Indianapolis.

“It’s been a little disappointing so far as a whole,” Leaf said of the AAU season. “We’ve played a lot better now, and I think we’re starting to come together a little bit. We never really played together before so I think we’ll be alright”

Leaf is focused on improving his own game as well, specifically his left hand.

“You can always get better at everything, but I think just my dribbling,” he said. “My left hand still. Just finishing with that (hand) and continuing to work on athleticism and shooting.”