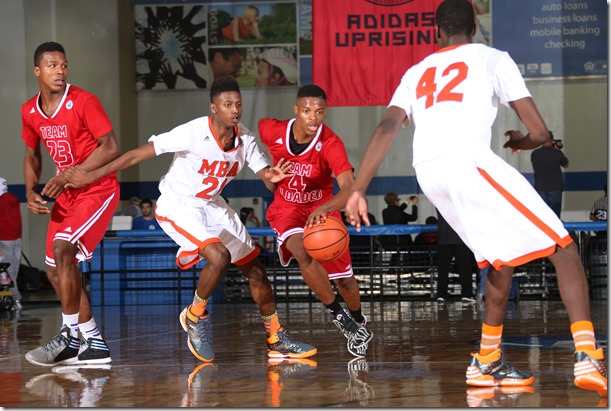 INDIANAPOLIS, Ind. — As Michigan has emerged on the national radar as a consistent contender over the last five years, the Wolverines have also turned into one of the best ball screen offenses in the country. Darius Morris, Trey Burke and Nik Stauskas all excelled running ball screens and young guard recruits are taking notice.

Michigan’s tendency to let their guards make plays has led to the Wolverines’ strong standing with a number of notable point guard targets — especially in the class of 2016. The Wolverines have been strongly linked to Derryck Thornton Jr., Cassius Winston, Jamal Murray and Quintin Goodin in the class and are now after another dynamic floor general, Dennis Smith Jr.

Smith, the 247 Sports Composite No. 2 point guard in the class, has an electric handle, great passing ability and elite athleticism to boot. Michigan jumped into his recruitment over the last month along with a host of other major programs across the country.

Smith rattled off a list of Louisville, Michigan, Duke and North Carolina when asked what schools have been after him recently and added that VCU “comes heavier than anyone else.” He also listed offers from Kansas, NC State, VCU, UNC Charlotte and Wake Forest.

Despite all of the new interest and headlines, Smith remains unfazed by the attention.

“I’ll always have a chip on my shoulder regardless of how many offers I have,” he said. “It’s just regular to me.”

Michigan and Smith are still getting to know each other, but Smith knows one thing about the Wolverine program.

“(I don’t know) a lot,” he admitted when asked what he knows about Michigan. “I just know they had Trey Burke and they’ve had some really good guards.”

Bacari Alexander is the point man in Smith’s recruitment and has started to form a bond with the North Carolina guard.

“He tells me he likes my game and I’d be a good fit for the style of offense they play and that they would run a lot of pick and rolls for me.”

The Wolverines have shown interest, but Smith could be a hard pull from ACC-country. Louisville has been coming on strong and Smith is intrigued by the Cardinals upcoming move to the ACC.

“That’s a good thing going for (Louisville) right now,” he said. “They are going to the ACC. There’s going to be some stiff competition in the ACC. It’s going to be fun to watch this year.”

Duke is also rumored to be a heavy player in the North Carolina native’s recruitment and have raved about the prestige of the Blue Devil program.

Smith is planning visits to Duke and North Carolina in the next month, but he hasn’t discussed a visit to Ann Arbor with the Michigan coaching staff. He’s also in no hurry to make a decision.

“Nobody is above anybody right now,” he said. “I probably won’t start making a list until late junior year.”