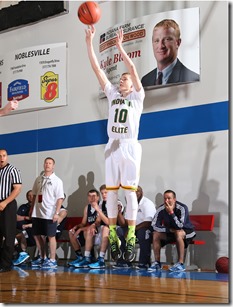 INDIANAPOLIS — Averaging over 15 points per game on the Adidas grassroots circuit, Kyle Guy is one of the top class of 2016 prospects in the state of Indiana.

A 247Sports Composite Top-100 player, Guy holds offers from Indiana, Indiana State and Purdue, but is drawing interest from most of the Midwest. The Hoosiers offered him nearly a year ago last July, but other schools are beginning to show more interest.

Butler, Indiana, Purdue, Xavier, Louisville and Michigan are the six schools that have been showing Guy the most interest of late, but the 6-foot-2 guard is much more interested in developing his game than advancing his recruitment.

“Everything really,” Guy answered when asked where he’s trying to improve. “I’m a pure believer in ‘never perfect’ so I’m always working on stuff to get better. I’ve gained like eight pounds – I’m still small, but I’m up to 154 pounds.”

Michigan has been recruiting Guy since last summer and hosted the 6-foot-2 guard for an unofficial visit during a football game last fall. The Wolverines are expecting to host Guy for another visit next month when he attends Michigan’s College Practice Camp.

Guy will be pitted head-to-head against some of the top prospects on Michigan’s recruiting board, with a chance to prove himself in front of the Wolverine coaches.

“They’ve just been telling me that I’d fit in great with their program,” Guy said of the Michigan coaches. “I’m actually going to their Elite Camp on June 7th so I’ll be down there.”

“Coach Jordan (is my main recruiter),” he said. “I love him, he’s a great coach and a great guy.”

Size could be the most important measurable for Guy in the coming year. He currently stands 6-foot-2, 154 pounds, but plays more like a shooting guard. His ability to grow into the shooting guard position at the next level could be critical to his recruitment taking off.

Michigan is tracking Guy closely to determine where he projects.

“We haven’t really got to that point (of discussing where I’d fit),” he said. “Because we don’t know if I’m going to grow into where I would only play shooting guard or play point guard as well.”

In the mean time, Guy is in no hurry to make a decision. He’s not sure what exactly he’s looking for in a school, but he’s confident that he’ll know it when he sees it.

“Everyone’s parents and grand parents tell them that ‘you’ll know the feeling’ so if I get the feeling I’ll know that’s the school, but great education, great fan support.”