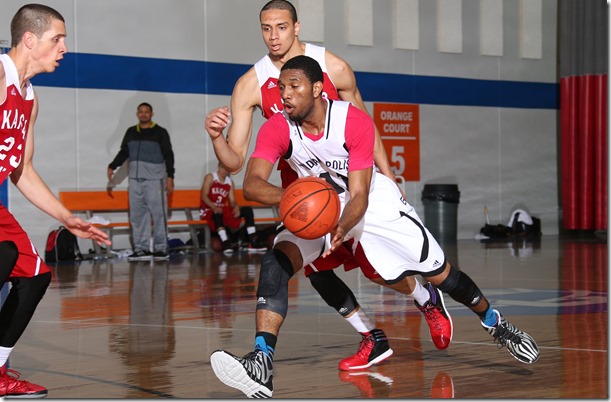 INDIANAPOLIS — Eron Gordon was a well-known commodity from a young age. He earned an offer from Indiana before his freshman year of high school and has been watched closely ever since.

That sort of attention can be a detriment to some players, but Gordon has continued to steadily improve despite the national attention.

Gordon, a top-50 player in the class of 2016, has played well this spring while filling up the stat sheet on the adidas grassroots circuit with EG 10 Red. He has also stayed in contact with the Wolverines, but his list of schools is growing not shrinking.

“Kentucky, Kansas, Indiana and Duke are probably the four that are coming at me the hardest,” Gordon reported on Saturday. “Michigan and Michigan State are probably right after that. Indiana, Purdue, Nebraska and Arizona State have offered.”

Michigan’s interest hasn’t necessarily faded, but other schools appear to be closer to the top of Gordon’s mind.

“I’ve kept in contact with (Michigan),” Gordon said. “I know a lot of players who play for Michigan so I stay in close contact. Coach Meyer was my dad’s college coach, so I have a lot of insight of what they like to do.”

Michigan’s guard development sticks out as a positive to Gordon.

Gordon’s rash of recent interest has come from his strong play in the April evaluation period, where he averaged 19 points per game, sixth best among all players at the Adidas Gauntlet session in front of college coaches in Dallas. Gordon’s scoring continued in Indianapolis as he scored over 20 points in all five games with totals of 29, 31, 29, 26 and 23.

Indiana has a natural connection because his brothers both played college basketball in Bloomington. Gordon admitted that the familiarity with the program helps, but won’t be a deciding factor.

“It’s probably not going to alter (my decision) because I know so much about it,” he said. “But it does help out a bit for Indiana.”

Gordon has drawn the attention of Kentucky’s Coach Calipari, who has been in contact with Gordon’s dad and his brother Eric. Gordon is also friends with incoming Kentucky freshman Trey Lyles, an Indianapolis native. He plans to visit Lexington in the next month or so.

“(Coach Cal) just likes how I play,” Gordon said. “He says I play hard and I’d be good for their program.”

Similar plans to visit Michigan could be in the works, but Gordon hesitated to confirm any trip was coming up.

“They were going to talk about me visiting down there,” Gordon said when asked if Michigan had discussed a scholarship offer. “But I’ve just been busy so (I haven’t yet). They said they’re pretty close to offering.”

An offer from the Wolverine staff wouldn’t come until June 15th, but more importantly it would require Gordon to take a trip to Ann Arbor.