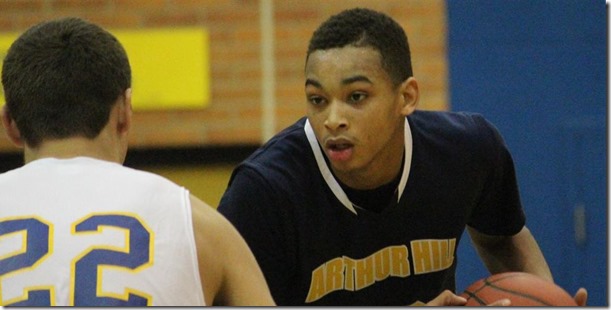 Michigan offered Saginaw Arthur Hill guard Eric Davis a scholarship after his unofficial visit last Thursday, the third scholarship that John Beilein has extended in the class of 2015. Davis, the 247 Sports Composite No. 39 player in the class, is averaging 16.7 points per game on the Nike EYBL circuit and has had a strong spring.

UM Hoops caught up with Davis for a phone interview on Tuesday night to discuss his visit to Ann Arbor and his thoughts on the Michigan offer.

How would you describe your game?
“I’m more of a scoring guard, but also a facilitator. Someone who can play both guard positions and can be versatile, but my strength is really scoring.”

What areas have you been working to improve?
“Being more explosive. I’ve gotten a lot stronger and just being a leader at all times – from the first tip off until the end of the game.

What position do you see yourself laying at the next level?
“Point guard.”

How has the Nike EYBL gone this spring?
“It’s going very well. It kind of started off rough but we picked it up and we’re getting better game by game.”

How did you play in Hampton last weekend?
“I played pretty well. We went 3-1 and wish we could have went 4-0, but we just have to adjust as a team and head to Minnesota and go 4-0.”

Take me through your Michigan visit?
“It went really well. I got got there and talked to Coach. We went to campus, to the academics area, the study hall where the guys study at, we went by some frat houses, we went to see where the guys stay in the dorms, went to a couple classes where I’d be at. Then we went back to Crisler Arena and we went in a room and he kind of showed me the offense and then told me that I’d be a perfect fit for the offense and Coach Beilein offered me a scholarship.”

How did he offer you?
“He told me that he wants me, the staff loves me and he said that my game and my character fit Michigan very well and then he said ‘I’m offering you a scholarship to the University of Michigan’”

How did he say you would fit in the offense?
“Just the way I can score with pick-and-roll offense, where I can attack off the dribble and find shooters and just my overall game.

What was your favorite part of the trip?
“Talking to the strength and conditioning coach [Jon Sanderson], we talked and we talked about some stuff I can work on and I really enjoyed that.”

What do you think of Michigan?
“Yeah I’ve been there a couple times. I like Michigan. It’s a great program academically and sports wise and I just want to keep developing a relationship with the staff.”

Who is your primary recruiter? “Coach Bacari and Coach Beilein. (Bacari) is a great guy, very good guy, he and coach Beilein both, I really enjoy talking to them. They want to get to know me first as a person rather than a basketball player, so he just asks a lot of questions about me what I like to do. He just kind of checks on me, how am I doing, just catching up and asking me feel comfortable and actually getting to know me as a person.”

Do you have any other visits planned? “The two schools I’m planning on visiting – I don’t know which dates but I know they will be official visits – are UCLA and UNLV and I haven’t discussed the dates yet but I know those are two schools I will visit officially.”

Would you take an official visit to Michigan? “I haven’t really thought about that one yet, I have to discuss that with my family.”

What are you looking for in a school?
“Academically as far as a business program. I say business because that’s what I know I want to major in and just my relationship with the staff – how well I feel at home on campus and with the staff, am I comfortable there? And then style of play. I like an open offense, fast break and a positive coach who is encouraging me to get the ball up.”

Is distance a big factor? “It doesn’t really matter, whatever best suits me. That’s the biggest thing. “

Are you attending any camps this summer? “I’m going to the NBA Top 100 Camp, the (Nike) Point Guard Camp, LeBron Camp and Chris Paul Camp.”