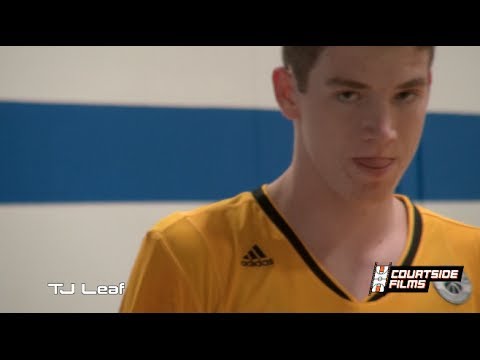 UM Hoops was on hand at the adidas Gauntlet in Indianapolis over the weekend to check in on a number of Michigan targets participating in the adidas grassroots summer circuit. The event, designed to compete with Nike’s EYBL, was one of four stops for adidas sponsored teams this summer. For more recruiting updates from Indianapolis, check out our previously published articles from the adidas Gauntlet.

There aren’t many better fits for the four position in Michigan’s offense than TJ Leaf. Leaf stands 6-foot-9 with a long wing span and he can do just a bit of everything offensively. His shooting stroke is most obvious – he knocked down several triples in rhythm. But he also has a surprisingly adept handle and is capable of taking bigger defenders off the dribble with ease. He finished easily at the rim with his length and athleticism and has the ability to score unconventionally in and around the paint. His biggest area for improvement is physicality in the paint. He’s still very skinny and wasn’t all that active on the backboard on either end. Added strength and muscle should help his rebounding. He also needs to work on going left, a flaw that he admitted is his biggest area to improve on this summer.

Eron Gordon continued to put up gaudy scoring numbers in Indianapolis — he averaged just shy of 28 points per game in five games – but he still isn’t the most efficient guard on the circuit by any means. He’s a volume shooter that needs a lot of shots to get his points. His jump shot is still a work in progress, but he has an impressive ability to get to the rim and finish through contact. Gordon is still point guard sized, but he projects as more of a scoring guard. The next step for him is to continue to improve his vision and passing ability to translate to the next level.

A five-star floor general that has blown up nationally this spring, Dennis Smith Jr. controls a game like great point guards are expected to do. He has great quickness and a smooth handle, but his passing ability stands out. He finds his teammates with ease off of ball screens, in transition or in simple half court sets. But there are plenty of guards with above-average vision and passing, what sets Smith apart is his next-level athleticism. He can finish at the rim and over people with ease and can create his shot anywhere on the floor. He needs to improve defensivel, both with his effort and discipline (he has the tendency to gamble for steals), but that’s something that will come with coaching at the next level.

Kyle Guy knows how to score the ball. He’s a very capable shooter and he does a great playing off the ball to get open. His size – 6-foot-2 and 154 pounds – is his biggest drawback right now. He’s an above-average athlete, he just needs to continue to develop the strength and size to compete at the next level. Despite his skinny frame, Guy doesn’t hesitate to attack the rim and get in the lane with the ability to finish above the rim. He’s great shooting off the dribble and gets good elevation on his jumpshot. Planning to camp at Michigan in June, Guy will have the opportunity to showcase his abilities in front of the Michigan coaching staff.

When he’s locked in and producing, there are few players that can hang with Carlton Bragg on the floor. He is capable of posterizing a defender with a big dunk and then draining threes on the next possession. He’s also capable of disappearing for long streches of a game. However, it appears that Michigan and Bragg have gone their separate ways. Bragg told reporters that he wasn’t aware of any Michigan interest at this time.

Two players that we hoped to watch in Indianapolis were Josh Langford of the Atlanta Celtics and Josh Sharma of the Mass Rivals. Both players have been on Michigan’s recruiting radar in recent weeks, but weren’t in attendance in Indianapolis for one reason or another.