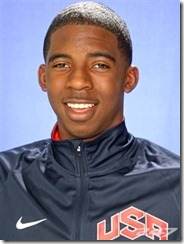 Michigan’s class of 2016 recruiting board continues to grow as the calendar moves closer to the June 15th offer date and four-star guard Quentin Goodin is a name that Wolverine fans will soon be more familiar with.

Michigan coaches stopped by to watch Goodin with his high school team over the winter as well as during the first session of the Nike EYBL. When Michigan watched Goodin during his prep season, he stepped up to the challenge and finished with a triple-double: 28 points, 13 assists and 10 rebounds.

Now Michigan will host Goodin for a camp visit.

At the Nike EYBL in Minnesota, Goodin confirmed that he will visit Michigan on June 7th for Michigan’s College Practice Camp. He was also familiar with what the Wolverines have to offer.

“I know (Michigan) has a good history,” Goodin said after a Nike EYBL game in Minneapolis. “I know they produce players to the NBA. For example, Trey Burke. I know they’re good with point guards. I’m a point guard, so I know if I went there, I could contribute, they could get me to the next level.”

Goodin expects that his potential for growth could provide some positional flexibility at the next level.

“Honestly, I can play the ‘1’ or ‘2’,” he said. “I feel like if you can play more positions than that one, you can be more valuable and more of a threat.”

The key for Goodin will be improving his jump shot. He’s just 4-of-21 on three-point attempts during EYBL play and is shooting just 35% on two-point attempts.

“Definitely my outside shot, 3-point range,” Goodin replied when asked where he needs to improve. “That’s going to be very important. I feel like that’s going to separate me from the other guys. And my pull-ups, my pull-up three range.

“And if I get more steals and be more vocal as a leader, instead of (just) worry about the offensive side, I’ll be a very good player.”

Part of Goodin’s struggles may come from playing on one of the youngest teams in the Nike EYBL. The St. Louis Eagles have just two players in the class of 2015 and most prospects are playing up a year. Playing in the 17U Division of the top summer league in the country, the learning curve is steep for younger prospects.

But Goodin’s promise hasn’t gone unnoticed. Most major schools in the Midwest have been tracking his progress and the Wolverines have been in steady contact.

Goodin will have the opportunity to show off his skills in Ann Arbor in front of the Wolverine coaches once again and begin to cement his standing in the pecking order for a Michigan offer.

J.B. Bauer of LateNightHoops.com contributed to this report.