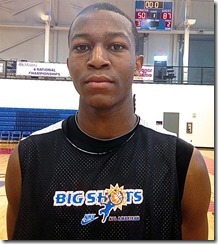 Tyus Battle has had an up-and-down spring on the Nike EYBL circuit. The 6-foot-5 shooting guard is ranked 8th nationally by the 247Sports Composite Rankings and is a consensus five-star prospect, but he’s averaging under 10 points per game.

Battle is shooting just 34% from the field and 29% on threes this season with Team Scan and is averaging just 8.8 points per game. Part of Battle’s adjustment has been transition from the Team Final AAU program to New York based Team Scan.

“Team Final is a great organization,” Battle said. “I love those guys a lot. With Team Scan I get to play point guard more and playing with the big men down low prepares me for college a lot.”

Team Scan’s front court is dominated by five-star big man Cheick Diallo, but for whatever reason Battle hasn’t been able to find a groove. Over the weekend in Minneapolis, Battle had one of his better weekends of the spring. He reached double digits twice including a 19 point outing against the Jackson Tigers.

Despite the slow season on the summer circuit, Battle is still drawing major college interest. Syracuse, Michigan, Indiana, Connecticut, Duke, Virginia, Wake Forest, Maryland and a host of other programs have been chasing the talented wing guard.

Battle plans to visit Michigan with another five-star prospect in the class of 2016.

“Yeah, I’m going to camp out there with Derryck (Thornton Jr.),” Battle said.

Derryck Thornton is another 2016 prospect prospect high on Michigan’s recruiting radar, and despite living on opposite coasts the two have grown close from attending various camps and tournaments throughout their prep careers.

Battle will be on campus for Michigan’s June 7th College Practice Camp along with an unofficial visit before the camp starts. This unofficial visit could pave the way for a Wolverine scholarship offer on June 15th — the first day Michigan offers 2016 prospects.

Battle is intrigued by how Michigan has been able to develop its wing guards and turn them into pros at the next level.

“Yeah, definitely,” Battle said when asked whether he was constant contact with the Wolverines. “Great organization and I love how they develop their players.

Battle has already visited Syracuse, Villanova, Ohio State and Indiana. Schools like Louisville, Duke and Kansas have also thrown their hat into the ring. The East coast native is also working on upcoming visits to UConn, Duke and Villanova.

In early April, Battle’s father reported that Michigan one was one of seven schools “working the hardest” for Battle along with Ohio State, UConn, Virginia, Villanova, Michigan, Syracuse and Indiana. That hard work will pay off with a visit this summer and provide the Wolverine staff an opportunity to impress the consensus top-15 recruit.