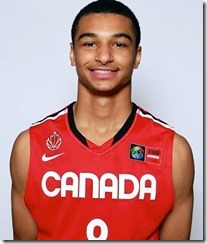 Michigan lost a talented Canadian to the NBA Draft this summer, but the Wolverines are chasing another Canadian guard that is expected to be a star at the college level.

Class of 2016 guard Jamal Murray is a top-30 player nationally that has excelled on the Nike EYBL circuit with CIA Bounce. Murray is averaging 11.4 points per game and shooting 39.5% from three-point range while handing out over three assists per game.

Murray’s strong play hasn’t gone unnoticed. He added offers from Illinois and Michigan State in the last week and schools like Michigan, Indiana, Syracuse and Marquette are also very involved in his recruitment.

“So far, I’ve just heard from Michigan State and Illinois (about an offer),” Murray said. “I’m not really paying attention to it, but it’s great for me. Just looking to get some more (interest) and to show all the other schools what I have to offer and I want them to show me what they have to offer.”

Murray is also firmly on Michigan’s recruiting radar and he visited Ann Arbor during the basketball season.

“I like their playing style,” Murray said of the Wolverines. “I’ve only seen one game. I’ve met the coach. But, I’d like to see more and see all the things they and other colleges and universities have to offer, so I’m not just limiting myself to one.”

Murray hasn’t taken many unofficial visits, so the Wolverines have an early leg up by drawing the Canadian to campus their win over Indiana in March. Murray was on hand to watch Michigan beat Indiana and cut down the nets as Big Ten Champions.

With the scoring ability and size to potentially play either guard spot, Murray has improved his point guard skills over the spring. He’s pleased with how he’s been able to cut down on his turnovers as the EYBL has progressed. After turning the ball over 17 times in his first five games on the Nike EYBL circuit, Murray had just 14 turnovers in his last 11 games — 1.27 per game.

“I thought at first I was going against some bigger stronger guys, faster, but I thought the passes I could make were the same,” Murray explained. “But no, you’ve got to adjust. And also, finding where the guys want the ball.

“You’ve just gotta get to know your teammates more and have more chemistry. That’s why off the court you gotta be fun with them so you get to know them better.”

Several of the schools recruiting Murray have had a lot of success with Canadian players. Michigan had Nik Stauskas while Syracuse had Tyler Ennis. Murray claimed that probably wouldn’t factor into his decision.

“I like to rep Canada well, but no matter where you’re from you try to go to the best school that suits you academically and on the court,” he said. “So, I like to represent Canada but I’m trying to figure out what’s best for me.”

Murray is expected to represent Team Canada at some point this summer, probably with its U18 National Team, and he’s also headed to Nike’s Elite Top 100 Camp for underclassmen.

Murray also helped CIA Bounce qualify for the Nike Peach Jam in July thanks to a 10-6 record on the Nike EYBL circuit this spring. Expect his recruitment to continue to trend upward once coaches are allowed back on the road for evaluation.

J.B. Bauer of LateNightHoops.com contributed to this report.