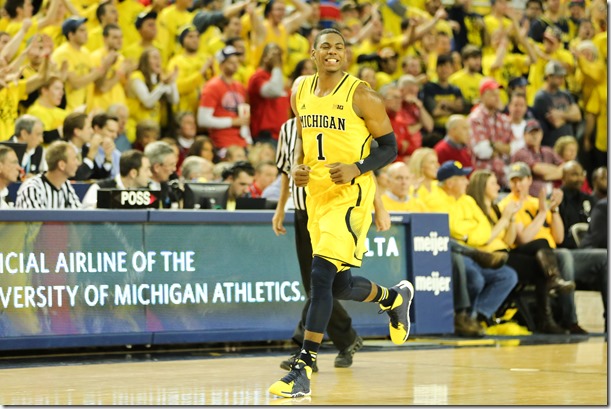 The NBA Draft is under a month away and Michigan’s three early-entry prospects all appear to be trending upward.  The Draft Combine is in the books, the lottery is set and we’ve reached the phase of draft prep where NBA prospects are shuttled from city to city to participate in an array of workouts and interviews at team facilities.

Nik Stauskas is now projected almost unanimously as a late-lottery pick, with most outlets projecting him between 10 and 14 in the draft. Glenn Robinson III and Mitch McGary are solidly in the mix from the 20-30 range in the first round. Multiple major draft publications project at least least one of them.

Glenn Robinson III has his first draft workouts this week with the Charlotte Hornets and the Atlanta Hawks – Robinson’s first workouts since the NBA Combine. The Hornets have the 9th, 24th and 45th picks while the Hawks have the 15th and 43rd picks in the draft. Robinson is also set to workout for the Chicago Bulls, Milwaukee Bucks and SAn Antonio Spurs.

The consensus among NBA scouts is that Robinson was rated too high coming into the season, but dropped too far during the season. That sounds accurate to my eyes and the national media are picking up steam with that narrative.

Robinson III was one of the four or five players who helped themselves the most at the draft combine. His elite athletic abilities, a slimmed-down physique and some very solid shooting numbers in the drills all gave him a boost in the eyes of scouts. Not to mention the fact that according to multiple GMs he absolutely nailed the interviews.

So what does Robinson have to do now? Show that he can apply those skills to actual basketball. At times he was passive this season and didn’t assert himself the way his talent suggests he could. That’s what caused him to slide on draft boards. MacLean has been working with Robinson on getting him more aggressive and it showed during the 3-on-3 workouts where he was much more active on both ends of the floor.

Robinson also had a strong workout in Chicago on Monday and now it appears that a number of teams in the mid-to-late first round are coming after him. He was probably ranked too high at the start of the season when we had him in the late lottery, but he’s probably underranked now. If he can keep up that aggressiveness in workouts, he should land somewhere in the 20s.

Here’s a recent interview with Robinson from Bleacher Report.

Could Nik Stauskas crack the top ten? Chad Ford thinks so in his latest mock draft

The Sixers addressed their frontcourt needs with their first pick, but they still need shooting. Stauskas is not only, arguably, the best shooter in the draft, but he has the ability to play both the 1 and the 2, giving the Sixers a great 2-guard plus depth behind Carter-Williams.

Stauskas’s shooting ability has been a known commodity on the national radar, but as teams take a closer look it’s his all-around offensive game – something Michigan fans are familiar with – that is allowing him to climb up NBA Draft boards.

Here’s a recent interview with Stauskas from Bleacher Report:

Mitch McGary didn’t attend the combine, he hasn’t worked out for anyone, and his camp insists that the priority is his health as a long-term player and not rushing back to workout for NBA teams. Despite all of the questions with McGary’s back, he could still be a first round pick. City League Hoops posted a workout video and McGary looks good — both with his fitness and shooting ability — now the question will be who could take a chance on him.

“(Robinson and McGary) are borderline first rounders right now,” ESPN’s Chad Ford wrote in a recent chat. “McGary’s size is appealing — especially if teams can get some comfort around his back. He’s working out again which is a really good sign.”

Ford has McGary going No. 30 in the draft to the San Antonio Spurs, a popular landing spot among mock drafters.

With the possibility of Tim Duncan retiring, the Spurs are going to need some help in the paint. Had McGary not hurt his back this fall, he would have been a lottery pick. If everything checks out OK, this could be another DeJuan Blair type get for them.