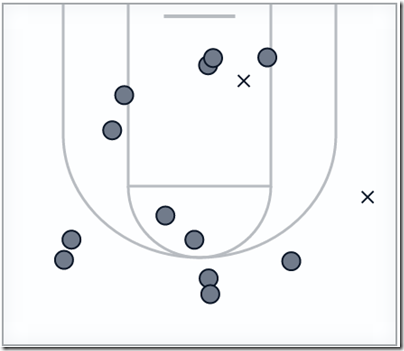 The fourth and final session of the Nike EYBL regular season took place in Minneapolis over the weekend. The event was the last chance for Nike sponsored teams to qualify for the Peach Jam in Georgia this July.

The field for the Peach Jam has been set and All-Ohio Red will enter the tournament with one of the best records in the Nike EYBL field. Michigan offeree Jalen Coleman is one of the major reasons why All-Ohio has been so successful.

Coleman stole the show over the weekend for All-Ohio Red in Minnesota and was named Most Valuable Player of the fourth session by D1Circuit.

His best game was against Playground Elite as he scored 32 points on 7-of-8 2-point shooting and 5-of-6 three-point shooting. Coleman’s shot chart was very impressive:

The play of four-star shooting guard Jalen Coleman on Sunday could be described in one word, exceptional. The 6-foot-3 wing was in the zone for All-Ohio Red during his first game on Sunday making 12-13 shots (5-6 3PT) to score 32 points. He also grabbed eight rebounds, dished out a pair of assists and played well on the defensive end. He added another 25 and eight during his second game of the day and has backed up his No. 31 ranking in the class of 2015. After taking some time to settle in with All-Ohio earlier in the spring, Coleman has been outstanding as a jump shooter. He has shot over 50 percent from the field overall and has made a ridiculous 50 percent of his three point attempts (46-92) in EYBL play.

Coleman has continued to tell reporters that he will trim his list once he has time to discuss things with his family. That opportunity could come this June as the AAU season winds down for a month.

“I’m not sure yet,” he said when asked when he would visit. “I haven’t been in contact with Michigan, but my dad has. We’re looking to make a visit in the next month or two.”

Ahmad reiterated that he feels comfortable with the Wolverines due to their connections to the All-Ohio program.

“I like their style of play,” Ahmad said. “We (All Ohio) have a long (history), actually Caris LeVert played for All Ohio Black. I watch them a lot.”

When asked whether he would have any Ohio-centric distaste for Michigan could affect his decision, Ahmad had a simple answer.

“I can get past that,” he said matter of factly.

Ahmad is a versatile forward that can do a bit of everything on the floor, both inside and out. He’s working on building off of that versatility.

“I just try to be a playmaker for my teammates,” Ahmad said. “Getting them open shots and just making the game easier for them. And I just get my points in the flow.”

Eron Harris announced a top three of Michigan, Michigan State and Purdue earlier this month. He has already visited Purdue and will travel to Michigan State this weekend. His Michigan visit is scheduled for the next weekend, June 6th and 7th, according to the Indianapolis Star’s Kyle Neddenriep.

Harris averaged over 17 points per game for West Virginia last season and will have two years of eligibility remaining after sitting out next season. He’s regarded as the top transfer available this off season.

The Family fell just short of automatic Peach Jam qualification, but will play a one-game wildcard playoff against CP3 on July 16th. Recent Michigan offer Eric Davis has been exceptional this season with The Family, averaging 17.1 points per game, and here are some highlights of Davis in action.