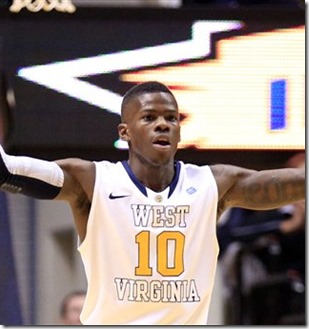 Michigan has yet to land a commitment from a class of 2015 prospect and has just three outstanding scholarship offers in the class. With limited scholarships remaining, the 2015 class should be moderately sized, but there are still a number of high-priority targets remaining on the radar. Here’s the latest on class of 2015 prospects and where things stand with the Wolverines.

Eron Harris just wrapped up his sophomore season at West Virginia, but because he would have to sit out for a year he’s most similar to a 2015 prospect. Harris will play his first game at his new school when the class of 2015 arrives on campus, he also gets to work with his future school for a year before he’s eligible. The 6-foot-3 guard will decide between Michigan, Michigan State and Purdue sometime shortly after he visits Michigan on June 7th.

With limited scholarships available, the addition of Harris to the recruiting picture would almost certainly affect other plans in the class of 2015. Would Michigan still push for similar shooting guards in the mold of Jalen Coleman with Harris is in the fold? It’s possible, but it could also lead to an either-or scenario.

In many ways, Harris is a known commodity. He’s a proven scorer at the major-conference level and he would have a free year to adjust to Michigan’s offensive and defensive schemes before hitting the ground running.

Coleman seems to have emerged as the top class of 2015 prospect on Michigan’s recruiting board right now. He had a monster spring on the Nike EYBL circuit with All-Ohio Red where he shot 50% from 3-point range (on 92 attempts) and averaged 15.2 points per game. He’s one of the best shooters in the country and his game has improved across the board since we watched him last summer.

Coleman plans to trim his list in the coming weeks, but is in no hurry to make a decision. Expect Michigan to make the cut for Coleman’s top group, but an early decision seems unlikely right now. Michigan is in a strong position, but Notre Dame, Illinois, Michigan State, Indiana and seemingly every other Midwestern school is also entrenched in Coleman’s recruitment.

Brunson averaged 17.2 points and 6.9 assists for the Mac Irvin Fire on the Nike EYBL circuit, cementing his status as one of the top point guards in class of 2015. He recently trimmed his list to eight schools: UConn, Michigan State, Illinois, Purdue, Kansas, Villanova, Michigan and Temple. Michigan was once considered to be one of the favorites in Brunson’s recruitment, but that momentum has cooled of late. Villanova is the latest school to be trending upward in the Brunson recruitment, but there are likely many more turns ahead.

Eric Davis visited Michigan mid-May and added the Wolverines to his lengthy offer list.  The Saginaw guard is planning to take official visits to Florida, UNLV and UCLA and is in no rush to make a decision. His most likely destination still seems to be out-of-state, but Michigan continues to pursue the versatile combo guard. Davis averaged 17.1 points and 2.9 assists per game for The Family on the Nike EYBL circuit.

These prospects are high on Michigan’s recruiting board and have been playing well, but haven’t visited Ann Arbor.

Ahmad has been working on setting up a Michigan visit this June and the visit seems likely, although plans haven’t been finalized. Ahmad projects as a stretch four in Michigan’s offense and could help bolster the Wolverines’ unproven frontcourt going forward. Ohio State is the home-state school and has offered Ahmad a scholarship, but the Wolverines also have connections to his AAU program with Trey Burke and Caris LeVert both playing under the All-Ohio umbrella.

Michigan has been tracking PJ Dozier for a long time, but his latest list of schools features just about every blue blood in the country: North Carolina, Kentucky, Kansas, South Carolina, Ohio State, Michigan, Indiana, Georgia Tech, Clemson and Louisville. Dozier plans to trim his list soon, which could be the first step toward earning a visit.

New targets to track that have popped up in recent weeks.

Sharma is a talented big man from the East Coast that attends Spike Albrecht’s former prep school, Northfield Mount Hermon in Massachusetts. Sharma, the consensus No. 78 player in the country, has seen his recruitment grow in recent weeks including new interest from Michigan. Sharma holds offers from Boston College (where he visited over the weekend), Wisconsin, Gonzaga, Illinois and UConn. He told reporters that he could visit Michigan in the coming weeks and that trip might be part of a Big Ten tour with his prep teammate, Aaron Falzon.

“That’s all I hear, Stauskas, Stauskas, so that’s a big attraction,” Ryan said.

Ryan spoke with John Beilein again on Monday evening and there seems to be developing mutual interest. Ryan is still recovering from hip surgery and Notre Dame has long been considered a favorite, but he wants to take his official visits.

A recent decommitment from UConn, Prince Ali has heard from a number of schools in recent days, according to All Metro Hoops

He said he has been hearing from a large number of schools, “I’ve heard from UCLA, Michigan, Michigan State, Minnesota, Indiana, Florida State, I’m supposed to be hearing from. North Carolina real soon, and a bunch of other schools.”

This is likely preliminary interest, but Ali is a name to watch this July when the evaluation period kicks off and he’s back on the market.

Murray heard from LaVall Jordan after the April evaluation period and he’s yet another wing guard prospect on the radar. He hasn’t visited Michigan, but he is another name to track over the July evaluation period.
UPDATE: Murray will announced his college decision tonight at 5 p.m. PST. Having never visited Michigan, Murray is likely headed elsewhere with Washington leading the way according to the Crystal Ball.

Ground to make up

Michigan has been involved in these recruitments, but is playing catch up.

Swanigan recently reclassified up a grade to the class of 2015. He’s a dominant low post threat that camped at Michigan last year, but his offer list is large. A Michigan offer is expected once Swanigan’s transcripts have been validated, but Michigan State, Kansas, Indiana, Arizona, Louisville have all offered as well.

Ellenson has put together a monster spring on the Nike EYBL circuit and Scout.com recently wrote that “Ellenson now projects as a potential prep All-American”. He’s hearing from nearly every major school in America including Michigan, who has been trying to get involved since this winter. Ellenson recently mentioned Michigan to reporters, but the Wolverines face an uphill battle.

Look for Michigan to track the progress of this group during the July evaluation period.

Ahrens is expected to take an official visit to Michigan State on Wednesday. Ahrens was recovering from a broken leg during the season, but tried to gut it out on the Nike EYBL circuit. He averaged 5.1 points per game and had just a 41 eFG% from the floor with King James. Expect Michigan to continue its evaluation during July.

Turner recently added a scholarship offer from Michigan State and took an official visit to East Lansing last month. He’s also planning to take an official visit to Stanford this weekend. Michigan has been in steady contact, and he’s close with incoming freshman Aubrey Dawkins, but he’s still being evaluated by the Michigan staff.

Tyler Williams (6-5 Wing): Michigan has been tracking Tyler Williams for over two years and he’s yet another option at the wing position. Williams has visited Michigan multiples times and averaged 6.9 points per game for Team Texas on the Nike EYBL circuit.

Dwayne Bacon (6-5 Guard): Bacon is one of the most versatile big guards in the country and has been discussing a trip to Michigan for well over a year. If that visit ever materializes, this recruitment could go somewhere but right now that doesn’t necessarily seem imminent.

Evan Boudreaux (6-7 Forward): An inside-outside combo forward, Boudreaux put up monster numbers at Lake Forest last season. Michigan has been in steady contact and has checked in on him throughout the last year.

Trevor Manuel (6-8 Forward): Manuel transferred to Oak Hill last year and has visited Michigan a handful of times, but hasn’t been a priority for the Wolverines at this juncture.