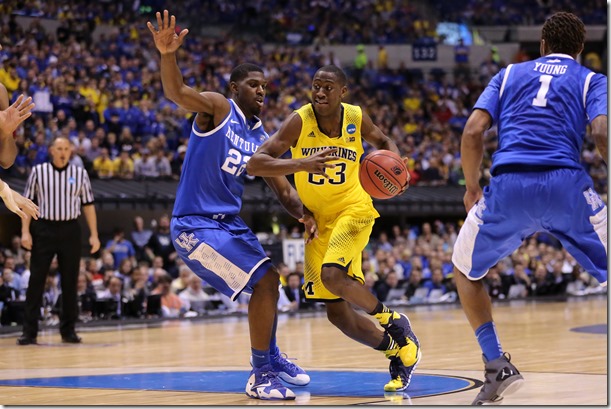 Caris LeVert underwent foot surgery on May 8th and is expected to make a full recovery in time for Michigan’s European tour in mid-August. LeVert’s original timeframe for recovery was 8-10 weeks and John Beilein reported that he’s on-track or ahead of schedule for recovery.

“The surgery was a success,” Beilein said during a meeting with the media on Tuesday. “With some of our players, he is such a grinder and he is in that gym so long, we didn’t want to take any chances (rushing him back.) We expect him to be full go probably by the beginning of August, if not sooner.”

LeVert, projected as a first-round pick in 2015, is considered the key to Michigan’s season after emerging as one of the most-improved players in the country last year. The 6-foot-6 guard averaged 12.9 points, 4.3 rebounds and 2.9 assists per game last season and is Michigan’s top returning scorer. The time off the floor this summer could help rest his body ahead of the 2014-15 season, but also means that he’ll have less time available to improve his game — something he’s proven more than capable of achieving.

The surgery also means that LeVert is likely to miss the Kevin Durant Skills Academy which he was previously planning on attending.

“His only plan is to stay here, go to school and prepare for our trip,” Beilein said.

As one of just four returning rotation players, LeVert’s participation in the Italy trip will be essential for developing a bond with his new teammates.

LeVert wasn’t the only Wolverine to go under the knife this offseason. Max Bielfeldt underwent hip surgery and will miss significant time this summer.

“Max Bielfeldt has had some hip surgery, and he’ll be down for most of the summer,” Beilein said. “The plan is to be on the trip, but if there’s any complications, then that would be different.”

Michigan lost the majority of its frontcourt in Jordan Morgan, Mitch McGary, Glenn Robinson III and Jon Horford and the only returning player with any previous minutes will now be sidelined throughout the summer. If Bielfeldt isn’t back for Michigan’s trip to Italy, it will baptism by fire for Mark Donnal and Ricky Doyle.

“Ricky and Mark Donnal are going to get a lot of meaningful minutes over the summer and if Max isn’t back on the trip, really good for them,” Beilein said. “For Max this would have been a great opportunity. It was going to be whoever was the best. He knows our things better than Mark but he and Mark both had really impressive moments in practice this season.”

Mark Donnal has had the opportunity to grow in Michigan’s system during a redshirt season last year while Ricky Doyle arrived on campus early to start on strength and conditioning with Michigan strength coach Jon Sanderson.

“He’s allowed to work with Jon (Sanderson), he can’t work with us at all,” Beilein explained while discussing Doyle. “That’s good, that was by his choice. His high school ended early, as it does down in the South sometimes, and he came up and he wanted to come up here and get an early start. Another good rule of the NCAA allows him to work with Jon because he’s assigned an ally.”

The early strength and conditioning opportunity should be invaluable for Doyle, who played in a weaker prep league and didn’t participate in the summer AAU circuit, as he attempts to make the transition to major-conference basketball.