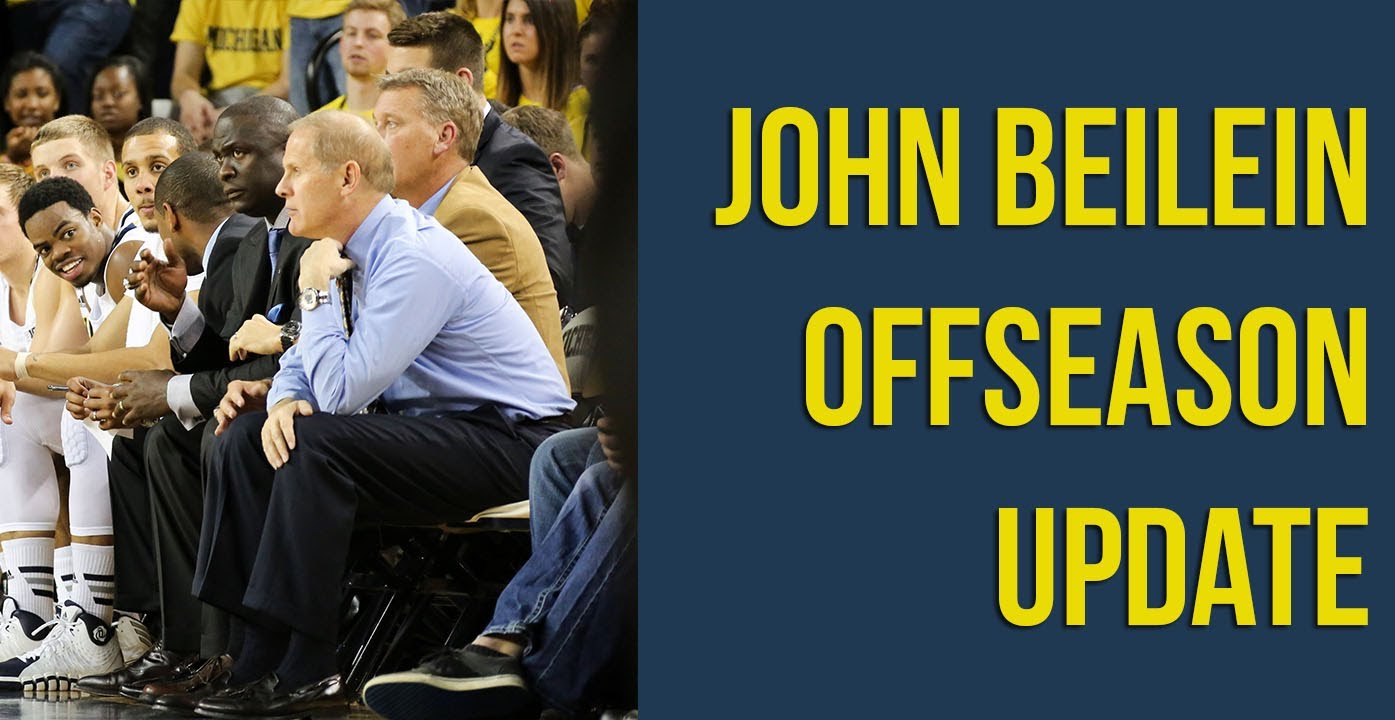 Michigan coach John Beilein spoke with the media for the first time since Nik Stauskas, Glenn Robinson III and Mitch McGary declared for the NBA Draft. In looking ahead to the upcoming season and updating the progress of his team, he touched on junior guard Caris LeVert’s recovery from foot surgery, Max Bielfeldt’s hip surgery, the team’s trip to Europe in August and the incoming freshman class.

On Caris LeVert’s surgery: “Obviously the surgery was a success. With some of our players, we thought he is such a grinder and he is in that gym so long that we didn’t want to take any chances. We expect him to be full go probably by the beginning of August, if not sooner.”

On potential signs of LeVert’s injury during the year: “No, the last week (of the season) is when I first heard about something. He may have complained at different times to teammates — there’s all kinds of aches and pains. He didn’t look like it, certainly, those last couple rebounds he got. … He’s in the gym so much, so maybe it’s good that he can be off his feet for a while.”

On those injuries in the future: “It’s going to happen with some people now and then, and it does happen, a stress fracture in the foot. We are really being cautious, and it’s the right thing to do.”

On plans for the trip to Europe in August: “They’re going well. We’re a little bit schedule-constricted, because we have to wait until classes end, and then Labor Day we have to be back ready to go, so it’s only an eight-day trip. Same thing we did last (time)—four games, eight days, sightseeing, practice.”

On taking the trip with a big freshman class: “The timing of it is perfect. If you remember four years ago, we weren’t going to do the trip, (but) it was the first time that the freshmen were allowed to make the trips. The timing with the six and then Mark (Donnal), it’s perfect for us to go. We’ll probably have our hat handed to us on a couple of occasions, but it will be good and it will be good to practice as well. We’ll have all the normal eight weeks of summer practice, two hours a week, but then we’ll have 10 days of unrestricted practice as well, so we’ll mesh those two together. I think it’ll be great for us being over there, and it’ll really determine a plan for us in the fall.”

On the chemistry of the team: “We’ll do some things on the trip such as room the freshmen with upperclassmen, try and teach our culture wherever we can. There’s no cell phones working, there’s going to be limited access to Internet, it’ll be a tremendous opportunity for us to bond.”

On guys stepping up to lead: “You can tell in the early practice drills who’s picking things up, who can lead and who needs to have a mentor with him. … We’ll go through that all summer long. There’s been so many good NCAA rules, the rules of allowing the freshmen to practice with us, go to summer school early (and) make these summer trips. It’s gone a long way for their assimilation into college basketball, let alone our culture. It’s perfect for us the way we teach our culture.”

On talking to big men about opportunity: “Yeah, we have, particularly with Ricky Doyle, who has actually arrived here early and is working out on his own. He was done. He finished a while ago. He knows a little bit about it. DJ Wilson is 6-feet-9, not slated as a center, but he can rebound and block shots.”

On Ricky Doyle: “There’s a whole lot of things with every freshman. (It’s) good that we have all this time with them, from June 20 when they begin their orientation, to August 15, before we leave for Europe, they’re going to have a great time to become oriented to the University.”

On Doyle coming early: “He’s allowed to work with Jon (Sanderson), he can’t work with us at all. That’s good, that was by his choice. His high school ended early, as it does down in the South sometimes, and he came up and he wanted to come up here and get an early start. Another good rule of the NCAA allows him to work with Jon because he’s assigned an ally.”

On being associated with the Detroit Pistons’ job opening: “Very little reaction. There’s many of our coaches that are out there, we watch basketball all the time. We’re always infatuated with every part of basketball, from watching a high school game to watching a college game, watching the guys who are scoring 158 points in a game. We’re always learning. We’ll always watch each other’s games. The plan for me is to coach Michigan until 2019.”

On whether the Pistons or any NBA team made any formal or informal offer: “No.”

On Derrick Walton’s improvements: “We just had a workout with him. … (We’re working on) range on his jump shot. When he first came here, he would have toes on the line all the time in practice, and getting range, that was something that separated Trey Burke, separated Nik, Tim, they could shoot from really deep range. He just shot really well just now. Getting stronger, he just had his 19th birthday. He’s really young.”

On his history with new Pistons coach Stan Van Gundy: “Yeah, I think I’m 0-1 against Stan. LeMoyne vs. UMass-Lowell. We stay in touch.”

On Zak Irvin potentially making the same strides as Nik Stauskas did between his freshman and sophomore years: “I really think so. The culture that’s been set here is we work really hard in the offseason. There’s no other culture right now. If you aren’t into that culture, your teammates are not going to allow it. Just working them out right now, they have been putting great work in for these last few weeks.”

On balancing coaching returning players vs. teaching incoming players: “This is different, because we have Max and we have Spike that have been through more than one year here. I think I’m accurate there. Am I forgetting anybody that’s a junior or senior? So I think everybody’s in the same boat. Max hasn’t had that type of time, Spike hasn’t had that much time, so I think it’ll give us a great time to start at ground zero and build everything up again. Obviously some will be ahead of (others), but there’s not veteran seniors and a young class. Everybody’s pretty young.”

On potentially rebuilding: “It’s not starting over, but the foundation is there now. Putting the bricks back in is not going to be as hard as it was seven years ago, but there’ll be another building point for us, which is good. You reexamine so many things.”

On conversations with NBA teams: “When you have one player going to the pros, you get a lot of phone calls. Can you imagine three? It’s from scouts and scouts cross-checking and things like that. We have a lot of phone calls. We are answering everyone at all different times. Meanwhile, some (teams) just got done playing or are playing, some of them are waiting around, waiting for the lottery. As we do these workups, we’ll hear more as well.”

On his opinion about Mitch McGary and the NCAA’s ruling: “I’m going to stay away from that. I’m just glad the way Mitch came forward and talked about what happened and that he was going to move forward. We’re all with him, and I think he’s in a really good place right now. I think he’s really practicing well from what I hear, and there’s going to be a lot of interest.”

One the one remaining open scholarship: “It’s always open. It’s open until the last day they’ll admit somebody here.”

On Caris LeVert taking on a bigger role: “You better believe Caris can be involved in that last play. I don’t think Nik (Stauskas) gets enough credit for the times that he made a play but he didn’t score. He threw the alley-oop to Glenn, or he found Caris or Glenn or Derrick on the perimeter.”

On other players limited: “Max Bielfeldt is. Max Bielfeldt has had some hip surgery, and he’ll be down for most of the summer. The plan is to be on the trip, but if there’s any complications, then that would be different.”

On late commits Aubrey Dawkins and Muhammad Ali Abdur-Rahkman: “For Aubrey, the attraction was his ascension as a player. … He is a full 6-6, maybe more than that. He is an elite athlete, and as a result, watching him, we felt that was really important for us to make sure we kept on those lines. I think his trend is so upward. I like that—I don’t like to see guys that are really good as juniors and stay there. With Muhammad, we see a lot of the qualities that we see with Caris, that he can get into the lane, he can shoot, he’s slippery.”

On renewing assistants’ contracts: “We’re working on that. We’re looking at the whole program right now, making sure all of our assistants’ salaries are competitive, especially given our success.”

On frontcourt play with Bielfeldt injured: “Ricky and Mark Donnal are going to get a lot of meaningful minutes over the summer. If Max isn’t back on the trip, really good for them.”

Special thanks to Jake Lourim of the Michigan Daily for providing the video and transcript of today’s availability session.