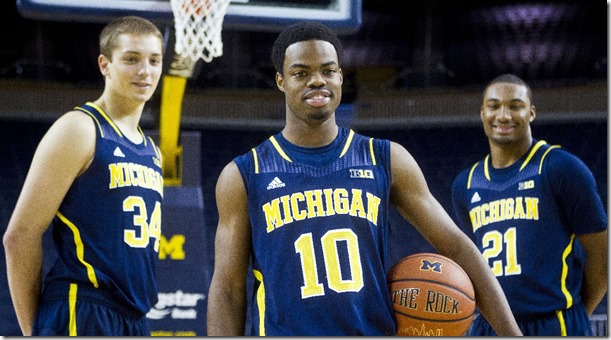 Michigan will head to Italy in the middle of August to play four games in eight days before the start of the fall semester. The trip will allow ten days of practice before heading across the Atlantic and provide some much needed hands-on instruction for a Wolverine roster that features seven players with freshman eligibility.

“We’re a little bit schedule-constricted, because we have to wait until classes end, and then Labor Day we have to be back ready to go (for the start of school), so it’s only an eight-day trip. Same thing we did last (time)—four games, eight days, sightseeing, practice.”

Specifics for Michigan’s trip haven’t been finalized, but the experience should accelerate growth. The Wolverines haven’t gone on an NCAA-allowed foreign tour since 2010 when they went just 1-3 in Belgium. The results during that tour were humbling, but the trip undeniably paid dividends as Michigan managed to make the NCAA tournament with the 11th youngest team in college basketball.

“The timing of it is perfect,” Beilein said. “If you remember four years ago, we weren’t going to do the trip, (but) it was the first time that the freshmen were allowed to make the trips. The timing with the six and then Mark (Donnal), it’s perfect for us to go.”

Beilein admitted that the results themselves might not always be reassuring, but the lessons will be important.

“We’ll probably have our hat handed to us on a couple of occasions,” the head coach admitted. “But it will be good and it will be good to practice as well. We’ll have all the normal eight weeks of summer practice, two hours a week, but then we’ll have 10 days of unrestricted practice as well, so we’ll mesh those two together. I think it’ll be great for us being over there, and it’ll really determine a plan for us in the fall.”

Michigan’s coach has always stressed the benefit of learning from a loss, so the opportunity to lose in games that don’t count could be just as beneficial as a victory in Europe.

The trip will also be critical for building the chemistry of Michigan’s young team. There aren’t many established leaders on the roster — Caris LeVert, Spike Albrecht and Max Bielfeldt are the only juniors – and over half of the roster has never played a game. A trip away with live competition should bring the team together sooner than expected, a process that Beilein and the Michigan staff will attempt to facilitate.

“We’ll do some things on the trip such as room the freshmen with upperclassmen, try and teach our culture wherever we can,” Beilein explained. “There’s no cell phones working, there’s going to be limited access to Internet, it’ll be a tremendous opportunity for us to bond.”

While there will be plenty of storylines in Italy, the focus will undoubtedly be on Michigan’s inexperienced frontcourt. Jordan Morgan had become a staple at the five position, Mitch McGary was a star when healthy and Jon Horford was a luxury insurance policy.

Morgan’s 119 reliable starts over the last four years are gone and now the Wolverines don’t have a single front court player that has ever started a game. Max Bielfeldt, Michigan’s most experienced frontcourt player returning, has played just 195 minutes in three years. The progression of Mark Donnal, Ricky Doyle and Bielfeldt (who is currently sidelined with a hip injury) hwill be the top priority in Italy. Banging against professional players in  Europe will be a good wake up call a couple months before the rigorous Big Ten season begins.

“Yeah, we have (discussed the great opportunity with the big men),” Beilein said. “Particularly with Ricky Doyle, who has actually arrived here early and is working out on his own. He was done (with school). He finished a while ago. He knows a little bit about it. DJ Wilson is 6-feet-9, not slated as a center, but he can rebound and block shots.”

Mark Donnal is perhaps the most intriguing of Michigan’s options down low. He’s had a year to add muscle, size and experience and now has the opportunity to start as a redshirt freshman and he provides a versatile game that could add to Michigan’s offense.

“This is a kid that can play the game inside out,” Michigan assistant coach Bacari Alexander said of Donnal in a May radio interview on WTKA .” He is a face up player in the block.  He can stretch in the pick-and-pop situation for three.  I think one of the areas that he’s improved upon that I had strongly encouraged and even during the high school year was becoming more formidable on the glass.”

Beilein has long had a soft spot for big men that can shoot and Donnal fits the criteria, especially as a pick-and-pop threat in an offense that has become so reliant on the high ball screen.

Expect Michigan’s bigs to have some growing pains in Italy, but every lesson learned in Europe is a lesson that doesn’t have to be learned in November. Each practice and friendly game and workout will help Donnal, Doyle, Bielfeldt and Wilson inch ever closer to being ready for the start of the season.