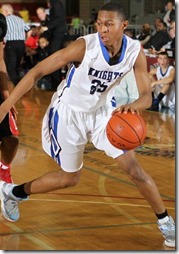 Earlier this week we broke down Michigan’s class of 2015 recruiting board, now we look at the class of 2016.

There are two big dates coming up for class of 2016 prospects. First, Michigan’s College Practice Camp is on Saturday (June 7th) – an event that will feature over a half-dozen of Michigan’s top targets in the class. (Check out the visitor list here.) One week later, Michigan will extend its first scholarship offers to 2016 prospects on June 15th – the first day that college coaches are allowed to directly contact underclassmen. Those two events will start to solidify Michigan’s recruiting picture even more clearly, but here’s the latest on Michigan’s 2016 targets and where things stand.

The point guard position has emerged as a priority in the class of 2016 and the Wolverines have been connected to most of the top lead guards in the country. Michigan is involved in the recruitments of seven of the top 13 point guard targets in the country, per 247 Sports’ Composite rankings. Recruiting for the point guard spot can be tricky because everyone wants to be assured that the ball will be in their hands. A wing guard can play the two and the three, a forward can split time at the three or four, but recruiting a point guard involves handing the keys over to your program.

The easiest way to assess 2016 point guard recruiting is to break things down into tiers.

Thornton appears to be firmly at the top of the board. There’s strong mutual interest, staff connections to his family, and he’s a star prospect. Michigan likes Thornton and Thornton likes Michigan. He’s currently in Ann Arbor for a lengthy visit that will conclude with Michigan’s College Practice Camp on Saturday. The Wolverines will look to make a move in his recruitment this weekend before likely extending an offer on June 15th. Arizona, USC, Kentucky, Cal, UNLV, UConn, and Memphis are some of the other schools pursuing the five-star point guard.

Murray adds an interesting dynamic to the equation with his ability to play either the one or the two spot. He improved his assist to turnover numbers over the course of the EYBL season, but he’s most-known for his scoring and shooting ability. At nearly 6-foot-5, Murray would be a natural fit to slide over the two spot and give Michigan some added flexibility. Murray recently told City of Basketball Love that he was high on the Wolverines.

“I loved [Michigan],” he said. “They played Indiana when I went, it was a great experience and I want to see more.”

Syracuse, Illinois, Michigan State and Florida are the top competitors right now and Michigan is one of a few schools that have already hosted Murray for an unofficial visit.

Winston is a known commodity in the state of Michigan and is hearing from most of the top Midwestern schools including Michigan, Michigan State, Iowa State, Iowa and Ohio State. Winston reported in Fort Wayne that he expects a Michigan offer by the end of the summer. Will he receive an offer on June 15th? That remains to be seen and could depend on his performance at camp this weekend.

Goodin is planning to visit Michigan for the Wolverines’ College Practice Camp this weekend and the top-50 point guard remains in the mix for a scholarship offer. Indiana is making a strong push, but both in-state schools – Kentucky and Louisville – could be tough to beat if they jump into the mix.

Yet another top-50 point guard hearing from Michigan, Ramsey has mentioned taking an unofficial visit to Michigan all the way from California. USC, Cal and Arizona State are also involved in Ramsey’s recruitment and the 6-foot guard averaged 9.9 points and 3.1 assist per game on the Nike EYBL circuit.

Smith liked that he was drawing interest from Michigan when I talked to him in Indianapolis in May, but Michigan is facing a uphill battle. Smith was most recently offered by Duke on an unofficial visit while North Carolina, North Carolina State, Louisville and Kansas are also involved. The home-state Blue Devils appear to be the near the top of his recruitment right now.

Beyond the point guard position, these are other players in prime position to earn a June 15th offer.

Leaf has visited Michigan twice – for the Notre Dame football game last year and for a full tour in May – and is a prototypical fit for the four position in Michigan’s offense. Arizona, Indiana, Michigan and UCLA are the top four schools for the California forward with family ties to the state of Indiana, but Michigan has made a strong push of late. ESPN ranked him 21st and gave him five stars in their most recent recruiting update and he would make an instant impact offensively.

Towns is approaching double-digit visits to Michigan and there’s serious mutual interest. He doesn’t hesitate to name Michigan his leader and he would fit at Michigan as a versatile stretch four player. Standing 6-foot-8, Towns is known for his smooth shooting stroke. He’ll visit Michigan again for camp on June 7th. While he hasn’t mentioned any plans to decide early, he still appears to be the best bet for an early decision on Michigan’s recruiting board as the only player to out-and-out name Michigan as his leader.

Battle hasn’t had the best summer on the Nike EYBL circuit, averaging 8.8 points per game for Team SCAN, but he’s still one of the top guard prospects in the country. He’s scheduled to be on campus with Thornton on Thursday and Friday before participating in College Practice Camp this week and that should fulfill his visit requirement to earn a scholarship offer.

Close to a scholarship offer, but maybe just outside of the group expected to be offered on June 15th.

Gordon holds offers from Arizona State, Nebraska and Purdue, but says Duke, Kansas, Kentucky and Indiana are recruiting him the hardest. The 6-foot-2 guard is more of a scorer than a true point guard, but he’s put up monster scoring totals on the Adidas Gauntlet circuit. Indiana is thought to be in a strong position, but Gordon and his family are also planning to visit Kentucky soon.

A talented but skinny combo guard from Indiana, Guy will be at Michigan’s College Practice Camp hoping to prove his abilities. He has offers from both in-state Indiana schools and Michigan has been tracking him closely. The Wolverines are watching guy to see whether he grows into a true off-guard, or he’ll play more of a combo at the next level.

Bigs are one of the hardest positions to evaluate early as the physical maturation between June after a player’s sophomore year until they arrive on a college campus can be dramatic. Here are three of the more prototypical fives on Michigan’s radar and where things stand.

Teske has offers from Miami, Dayton and Ohio State while Michigan and Notre Dame have been in close pursuit. Teske visited Michigan for its win over Michigan State during the season and is the most likely candidate for a June 15th offer among the big men. The Medina (OH) native missed significant time this spring with an injury, but is one of the top 2016 bigs on Michigan’s radar and has a golden opportunity this week at camp.

Benson camped at Michigan last season and has started to pick up high-major offers this spring. Indiana extended an offer and he’s now a top-100 level recruit. Michigan continues to stay involved and is tracking the Illinois big.

Eichelberger is another big man that has been on Michigan’s radar for a while. He’s visited Michigan in the past and will be a name to track throughout July.

A top-40 prospect in the class, Funderburk has mentioned a potential visit to Michigan in the past but some others appear to be more entrenched in his recruitment at this juncture.

Skyler Nash (6-4 Wing): Nash will be making yet another visit to Ann Arbor for College Practice Camp this weekend. He’s an explosive guard that has developed a solid relationship with LaVall Jordan.

Ben Coupet Jr. (6-6 Wing): Another Illinois wing, Coupet tweeted that he plans to take a visit to Michigan very soon.

Matthew Moyer (6-8 Forward): Seth Towns’ AAU teammate, Moyer is an explosive combo forward with top-flight athleticism and a high-motor. He’s still developing his perimeter skills, but is an intriguing prospect as he grows and continues to put the pieces together.