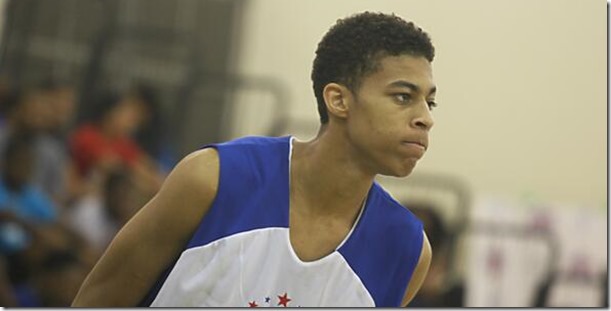 Michigan held its annual College Practice Camp on Saturday and hosted a number of the top point guards in the class of 2016 on campus including No. 19 Derryck Thornton, No. 29 Cassius Winston, No. 54 Quentin Goodin and No. 77 Kyle Guy. Of the top point guards in attendance, it was Winston who had the best camp, but Thornton who showed he could be the best player down the road.

Thornton is explosive with the ball in his hands and can get up and finish at the rim. His athleticism was also obvious on the defensive end where he a did a good job of staying in front of other lead guards. He has quick hands and came up with a number of steals and was the fastest point guard in attendance. He has both the tools and the mental edge to be an elite defender at the next level.

His handle and driving ability are both above-average and he got in the lane consistently, creating for himself or others. His jump shot was a bit inconsistent in drills – he needs to get more rotation on his shot – but he turned his game up another level during game action. Thornton didn’t have the best weekend of the point guards on campus, but he showed enough of his skill set to prove that he probably has the most long-term potential.

Winston might have been a level below Thornton on the totem pole entering camp on Saturday, but he made a point with his play on Saturday.  He shot the ball extremely well in drills and five-on-five action including some pretty step-back jumpers. His shot has been questioned in the past, but this was the second year in a row that he shot the ball extremely well in front of Michigan coaches at camp.

Winston is a results-oriented point guard. He’s not the biggest or the quickest guard, but he’s almost always productive. Whether he has to drive and get fouled, drive and dish or shoot over his opponents, Winston is going to do whatever it takes to win — and he’s usually quicker at identifying what needs to be done than most. Questions about his athleticism are fair, but you can’t question the fact that his teams win games more often than they lose.

Winston had arguably the best camp performance of any prospect in attendance and provided Michigan’s coaching staff a lot to think about.

Goodin turned his game up to another level once three-on-three and five-on-five games started up and showed well in head-to-head battles with Thornton and Winston. Goodin was the biggest of any point guard targets and he was able to use that size and strength to his advantage. He had a number of athletic and strong finishes around the bucket and was able to get in the paint whenever he wanted. His shot needs refinement – he shoots the ball from a bit too low and doesn’t look for his three-point shot – but big point guards that can get to the cup are valuable and Goodin fits that mold. Goodin is also a great distributor and had some excellent passes in the half court and in transition.

Guy is the size of a point guard, but he’s not a point guard right now. That being said, he flat out gets buckets. He moves so well with and without the ball and gets great elevation on his shot – which usually goes in. He’s very skinny, but it’s hard to argue with the results of his game. It becomes obvious just how good Guy is when you watch him go through shooting drills and knock down jumper after jumper. The only question in Guy’s game is where he plays at the next level? If he grows, he could be a perfect off-guard, but if not he will need to develop his point guard skill set.

Webster is a name to commit to memory for now. He’s a sub-6 foot guard from Park Tudor (IN), the same school that produced Indiana point guard Yogi Ferrell. He played very well during the morning session of camp and he has a good feel for the game that you don’t always see from young guards.