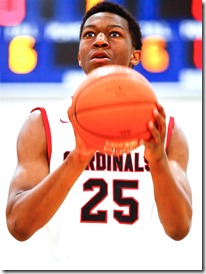 Tyus Battle was the highest ranked prospect at Michigan’s College Practice Camp on Saturday and he lived up to his ranking. But Battle wasn’t the only prospect to have a big performance and these other wings and bigs caught our eyes during both sessions of camp.

Battle struggled a bit during the Nike EYBL circuit this spring, but he looked the part of a five-star shooting guard on Saturday. Battle has elite level athleticism and had a number of impressive finishes above and around the rim, but he also showed off a smooth jump stroke and a solid handle. I watched him closely during shooting drills and he missed just a single 18-footer in one set and then stepped back to three-point range and put on another impressive showing. In games, he relies on what he does best: getting to the bucket. He’s able to change direction in the air and attack the rim despite the fact that he’s still skinny and will fill out significantly in the two years

On a day when everyone was watching him closely to see if he lived up to his hype, Battle backed up his ranking emphatically.

There’s no debating that Towns is a great fit for what Michigan does. At 6-foot-8, he’s known for his smooth jump shot and he rarely disappoints in that department. If anyone can always use a 6-foot-8 shooter, it’s John Beilein.

However, I still think he needs to be more assertive and more aggressive with the ball. He played on the same team as Thornton in five-on-five play, but never quite got going and actually saw his team stuck on the loser’s court for a few games. He’s skilled and smooth, but he’s not an overwhelming athlete. The area of his game that needs the most development is his ability to create something off the dribble as he generally settles for the jumper, no matter if he’s guarded by a big man or a smaller guard. There’s still time to develop these areas of his game, but they will be important to watch over the next two years of high school play.

The first thing that stands out about Teske is his legitimate 6-foot-11 size, he’s a big kid and he moves fairly well. It’s always difficult for a big man to get involved in a camp situation, playing with a random assortment of teammates of various abilities, but Teske showed some signs of why Michigan likes him. He finishes at the rim, rolled hard to the basket, can stick a mid-range jumper and was also a game changer defensively with his length. It’s pretty easy to see how he could be a good fit for Michigan down low.

Moyer has so many tools – size, athleticism and skill – but he’s still putting everything together. There were times where he looked phenomenal: he went head-to-head with Tyus Battle quite a bit in one game and was very productive, another time he buried a step back three off the bounce. But then there were other times when he struggled with some out of control drives to the rim. At 6-foot-8, he has the ability to turn into a very good player. Is he good enough for an offer right now? Probably not, but it’s not unreasonable to think that he could end up there if he reaches his potential.

Tillman was a man among boys during the morning session of camp. He dominated physically and controlled both 3-on-3 and 5-on-5 games. He had multiple dunks off the dribble in 3-on-3 play with crossover dribbles and drives. He finished on the low block with a nice baseline spin and is starting to become more consistent with his jumper. Right now his jump shot is too flat and a bit inconsistent, but he has all of the tools to be a dominant big man in the state of Michigan.

Benson is now a two-time camper and has had a great spring, adding offers and cracking some top-100 lists. He’s continued to grow and shed some baby fat, but he’s still working on developing his low post game. He has the size to throw around, but isn’t quite comfortable down there yet. He’s one that Michigan is likely to continue to track this July. His highlight of the day was a strong drive and dunk during 3-on-3 play.