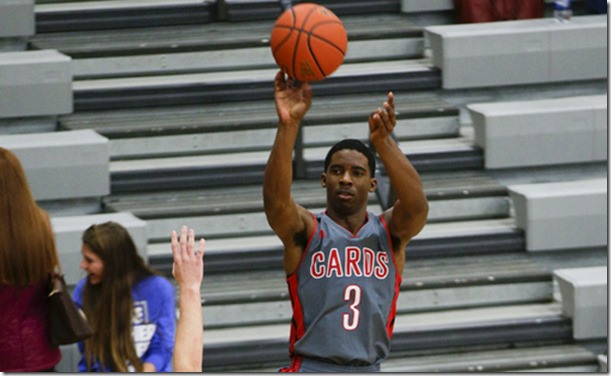 Goodin is a strong point guard that excels attacking the rim and getting his teammates involved.

“I’m a pass first type of point guard, but I can score the ball too,” Goodin explained during a phone interview on Sunday night. “I like to attack to the rim and get my teammates involved and I just love and enjoy playing the game of basketball – I show a lot of passion and energy on the court.”

Last weekend, the Kentucky native visited two of the schools that have been showing recent interest, Michigan and Ohio State.

“I went to Ohio State first and then went up to Michigan, Goodin explained. “We visited Michigan Friday, stayed for about four and a half or five hours and they seemed like they really enjoyed my presence and then went to the Michigan camp that Saturday and left that night and came back home.

Michigan assistant coach Jeff Meyer has been Goodin’s primary recruiter and served as his point-man during the campus visit.

“Coach Meyer, he’s the one that’s been recruiting me lately,” Goodin said. “He said I fit the offense perfectly and the style of play I play fits the Michigan offense perfectly. He said that he sees how effective I am in transition and Coach Meyer said they look for transition first and then set up a play so I’d fit in perfectly.”

After the Friday evening visit, Goodin switched gears on Saturday and took to the basketball court for Michigan’s College Practice Camp. Goodin loved the camp because it gave him the opportunity to face off against some great talent.

“It was really fun,” he said. “I got to see some of my friends like Tyus Battle, Derryck Thornton. It’s always good to see other friends and compete and I feel like that’s the best time to play against each other, some people you know because that brings your game out the best.”

“I feel like I was one of the best players up there,” Goodin responded when asked how he played. “(Detroit point guard) Cassius Winston was a great player too, we’re both guards but we play two different styles, but I felt like I played really well in front of the staff.”

The Wolverine visit went as well as Goodin could have hoped and the Wolverines should be in contact with Goodin on June 15th.

“Ohio State went good, Michigan went good,” Goodin said. “I couldn’t complain about either one, they are both great schools, have great history and are great programs.”

Like any good player, Goodin is more worried about improving his game than advancing his recruitment.

His high school season was a success, but fell just short of the state championship. Losing just one player from last year’s roster, Goodin is confident that winning states is an achievable goal. The spring has been spent on the Nike EYBL circuit with the St. Louis Eagles. Playing up a grade in the best summer league in the country, Goodin averaged 8.2 points and 2.2 assists per game.

“This is my first time so it was really fun, I’ve enjoyed my time and I’m ready to go back with my friends and teammates. When they say you’re playing with the best of the best, they weren’t joking at all. You have to bring your a-game every game so it’s really fun, you get better, especially playing up a grade level. You’re going to better, you’re going to stronger and your IQ is going to get better.”

A college decision appears to be a long way off, as Goodin doesn’t plan to choose a school until next summer.

“Not really,” Goodin responded when asked if any schools stand out. “I’m still soaking it all in. I’m planning on getting a list out at the end of this summer – probably like the last week of July.

“I don’t plan on committing until the end of the summer after my junior year. “