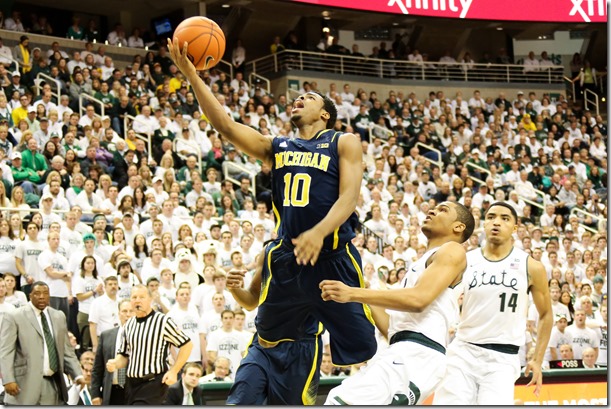 Walton, LeVert and Irvin seem like no-brainers and Chatman and Donnal seem like the most logical fits at the four and five spots right now. Chatman is a natural left-handed player – ideal for the four spot on the right wing – and Donnal seems to have the most ideal blend of talent and experience with the redshirt year.

Fast forwarding to February, I could very easily see the same lineup, but if there are changes they would likely be in the frontcourt. DJ Wilson or Ricky Doyle could both play their way into the rotation which would mean: a) They are playing really great or b) Mark Donnal or Kameron Chatman is struggling. Doyle could give a more traditional interior scorer down low, and looks like he’s already made progress physically, while Wilson has the length (but not the muscle) to potentially play either spot down low in a pinch.

xGoblue37x: Do you think Michigan BB gets a 2016 commitment before a 2015 commitment?

This seems like the reasonable – or likely — scenario right now. Jalen Coleman, Jalen Brunson and Eric Davis are in no hurry to make their college decisions and aren’t expected to decide before the fall. Coleman plans to trim his list soon, but he’s never been in a rush.

Michigan is going to hand out several offers for the class of 2016 on Sunday and there are two prospects who have Michigan very high on their lists: Derryck Thornton Jr. and Seth Towns.

Many others will get offers and I would expect Michigan to push for some early commitments on the June 15th date – similar to Mark Donnal and Austin Hatch in 2011 – to start to recruit other 2016 prospects including TJ Leaf, Tyus Battle and others. Thinking back to June 2011, it was Hatch and Donnal on the phone with Monte Morris trying to push for an early commitment. Things didn’t work out exactly how Michigan planned, but expect any early commitment to take the lead as a recruiter if John Beilein can grab someone early.

There are also more options in that class right now and it’s likely that by the end of the summer, Michigan will have more 2016 offers outstanding than 2015 offers.

JakeGrubbs1: How heavy a push do you see if Michigan misses on both the Jalen’s? Will they go after other targets or shift their focus to 2016?

I’ve said before that Jalen Coleman is likely the top 2015 target on the board – he’ll be a priority until he makes his college decision. Jalen Brunson is still a great player, but other schools seem to have the momentum in his recruitment right now – namely Illinois (where he visited this week), Temple and Villanova.

I think Michigan is in a position where it doesn’t have to gamble on the class of 2015. The Wolverines can be careful with who they offer because they feel strongly about a lot of their class of 2016 targets. Michigan’s immediate numbers concerns are somewhat quelled by the addition of Muhammad Ali Abdur-Rahkman and Aubrey Dawkins, which means that the Wolverines don’t have to chase just to fill a spot. Expect July to be an important month of evaluation – remember last year DJ Wilson and Donte Grantham weren’t even on the radar before July and ended up being some of Michigan’s top targets in August – as the live evaluation period opens up again.

Look for Michigan to evaluate carefully and find prospects that John Beilein likes, but not rush into anything. As that evaluation goes on, any early class of 2016 commitments have the ability to change the picture for 2015s as well.

Alex Cook: How do you anticipate the minutes at the 4 / 5 to break down? Just how immensely important is Mark Donnal’s foul rate?

Sticking with a similar thought process as in the first question, I think Europe will be critical to figuring out who can provide viable minutes down low.

Mark Donnal, Ricky Doyle and Max Bielfeldt all project to the five spot in my eyes. Fouls are always important, but just how important they are for any individual player depends on how ready the others are to give competent minutes.

Kameron Chatman is a perfect fit for the four spot. Zak Irvin has proven that he play that spot in a pinch and even Aubrey Dawkins could step in and provide enough athleticism there.

DJ Wilson is the x-factor. He’s extremely skinny, but he can get off the floor and stretch opposing bigs away from the hoop. He’s obviously the most natural fit for the four position, but if Donnal, Bielfeldt and Doyle struggle, then perhaps he gets thrown into the five spot as well.

geoffclark: Who is more likely to have a better sophomore year: Walton or Irvin?

This is a fun question because I think both players only showed only a fraction of their games as freshmen. For the most part, that was due to as much to the composition of the team as much as it was to their own shortcomings. Michigan had its playmakers last season and John Beilein never needed to throw Zak Irvin or Derrick Walton into that role. Does that mean they weren’t capable? Not necessarily.

I’m going with Derrick Walton. I think he’s ready to step up and take on a leadership role and really start to show some ownership of the program from the point guard spot. There aren’t a lot of dominant personalities on next year’s roster (LeVert and Irvin don’t really fit the bill) and Walton has the ability to take on that role. Look for Walton to take the reins and start to increase his scoring usage in the form of a Yogi Ferrell and possibly step up as Michigan’s No. 2 scorer.

‏Josh_Sabo: How well does Kameron Chatman have to play for Michigan to compete for the B1G title?

Considering I just projected him as a likely starter, he obviously needs to play well. However, I’m not sure he’s the most critical cog to Michigan’s success. I expect his usage rate to be more similar to Glenn Robinson III as a freshman – meaning he’s a complementary piece to Caris LeVert, Derrick Walton and Zak Irvin. The onus is on that trio to carry Michigan’s offense next season and any contributions that the Wolverines get from other players is simply a bonus. There isn’t much room on a roster for a fourth major scoring threat and that should allow Chatman to ease into his offensive responsibilities. That’s a nice luxury because Chatman’s game isn’t necessarily that of the Alpha-scorer, he’s much more of a passer and a player that can pick his spots.

While some sort of improvement from LeVert,Walton and Irvin can be reasonably assumed – the greatest unknown is at the five spot. Michigan has only question marks at that position and it’s tough to see this team competing for the Big Ten unless someone steps up to provide a reliable pick-and-roll threat, defense and rebounding option.

eddieben: With the loss of many meaningful minutes this offseason, I’m particularly concerned that the defense will continue to languish. What areas of the defense do you think can get better? Do you anticipate different defensive schemes to match this year’s personnel (more/less zone, 1-3-1 vs 2-3, etc)? Obviously we have lost a lot of rebounds with graduation, a transfer, and early entries, but it’s the on-ball defense that was always the weakest link last year. Is there hope that that can be improved?

Last year’s Michigan team had the worst defense (by KenPom ranking) of the John Beilein era. It was the worst defense on a Beilein-coached team since his 2003 West Virginia team went 14-15. But Michigan was still won the Big Ten outright by three games and was a 25-foot three-pointer away from the Final Four. I’m convinced that replenishing the elite offense (which has been best in the country for two years running) will have a bigger effect on next season’s results. This is a program that has become reliant on having an elite offense and it’s tough to complain with that strategy given the results.

Stauskas was by most measures a below-average defender. Glenn Robinson III provided an elite level of athleticism, but was never the difference maker on the glass that Michigan coveted. Despite the fact that both players could be picked in the first-round of the NBA Draft later this month, those are losses that Michigan can recover from adequately.

The frontcourt losses are more concerning. Jordan Morgan was the anchor of the defense for four years and Mitch McGary is an elite defensive rebounder when he’s healthy. Relying almost entirely on an unproven frontcourt has the tendency to be a disaster. Michigan had managed to be at least competent on the defensive glass in recent seasons and its ability to tread water on the glass will be critical.

MGoBlueAdam: With the addition of Donnal to the lineup will we see more pick and roll or pick and pop this year? Or will the offense be tweaked to accommodate having 5 shooters on the floor?

John Beilein has always loved three-point shooting bigs and somehow he’s only really had one or two in Ann Arbor (DeShawn Sims and Evan Smotrycz come to mind). If Donnal plays the kind of game that we saw from him during high school, he would certainly add a new element to the Michigan offense. The pick-and-pop was never a big threat previously, but I have no doubt that it would be if Donnal proves himself as a 35%+ perimeter shooter.

Whoever plays the five spot will need to develop chemistry with Derrick Walton and Caris LeVert because the ability to create some of that ball screen offense at the rim has been critical in recent seasons and LeVert and Walton both struggled at times last season to find the roll man.