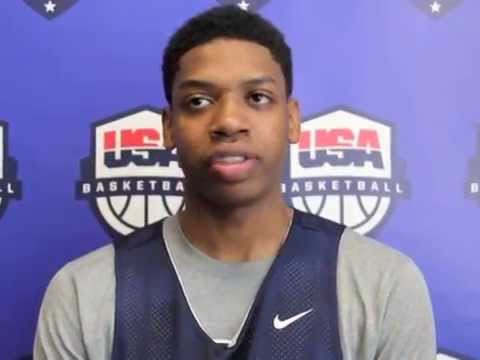 Transcribed quotes after the jump.

On the USA Basketball experience: It’s an honor to be out here. Just being one of the 24 guys that they chose to be with the Under 18 team. I’m just honored and I’m having fun so it’s pretty good.

On when he realized he could play basketball at the next level: “My sophomore year of basketball, I knew that I was going to go to college, but I didn’t think Division I because I was a bit chubby and I was shorter then. My sophomore summer I hit a growth spurt and went from 6-foot-2 to 6-foot-5, so during that summer I started thinking maybe I can play at a D1 level.”

On the best advice he’s received: “It was recently, it was from Michael Jordan because I played in the Jordan Brand game. He said when someone asked him how does he prepare for a game, he said he didn’t. He’d prepare, but during practice was his preparation. Every single practice he would go hard like it’s a game and then once the game came it was just natural. That was probably the best advice I’ve heard.”

On the advice he would give to a young player:”Just stay in the gym. That’s all I’ve done since I was five. I’ve jsut been in the gym every single day. You can’t go wrong with working hard so that’s what I would say.”

On whether he’s having fun in Colorado: “Yeah, I have to get used to the altitude and stuff like that, but it’s nice out here I like it.”

On the competition: “It’s great, I like it. Every single dude is good so there’s no let down or anything.”