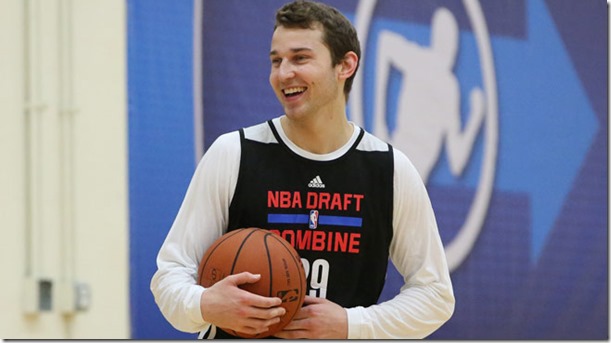 The NBA Draft is 14 days away and Nik Stauskas, Mitch McGary and Glenn Robinson III are all on track to hear their names at some point on draft day. Stauskas is projected around the 9 through 15 range of the first round, while McGary and Robinson are both fringe first-rounders.

Jordan Morgan has also grabbed a few NBA workouts recently. He worked out with the Cavs and Timberwolves this week and is scheduled to work out with the Bulls next week.

“I’m in really good shape right now, and that’s been a big part of the feedback I’ve been getting, how good of shape I’ve been able to work myself into and how much athleticism I’ve been able to show,” Morgan told MLive.com. “You’re never really sure what they expect from you or what they want, but you just kind of go in there and give everything you’ve got.”

Experts agree that when they get to the league, Michigan players should be well prepared for success. ESPN’s Jeff Goodman published a list of the college coaches that best prepare their players for the NBA and Michigan head coach John Beilein was ranked third on the list.

He’s starting to churn out NBA guys lately — Trey Burke and Tim Hardaway Jr., and Nik Stauskas, Mitch McGary and Glenn Robinson III this year. “Player development,” said one NBA scout. “Bottom line. He works on players’ individual games. There’s a lot of shooting, of course, but every practice he takes 20 or so minutes to focus on getting guys better.”

After the jump find the latest on John Beilein’s NBA-bound former players.

Nik Stauskas has worked out with the Charlotte Hornets and is scheduled to workout with only four teams total: Charlotte (9), Boston (6/17), Phoenix (14/18) and the LA Lakers (7). DraftExpress currently has Stauskas projected in the No. 9 spot heading to Charlotte.

Charlotte ranked as one of the worst perimeter shooting teams in the NBA last year, and will be looking to address this issue in a major way this offseason. If Doug McDermott is indeed off the board, the Hornets could gravitate towards the player many consider the second best shooter in the draft, Nik Stauskas.

Mitch McGary still hasn’t worked out with any NBA teams, but is planning to do some limited workouts before the draft. MLive’s Nick Baumgardner caught up with McGary’s agent, Mark Bartelstein, to discuss his plan.

“Everything’s good, we’re hopefully going to start working out toward the middle or end of next week, we’re trying to schedule some stuff” Bartelstein said. “Everything’s been good, he’s progressing, that’s probably the plan right now.

“There’s a lot of interest, no question. But we’re going to do a limited number of workouts, we’re not going to overdo it. It’ll be his first time getting back into contact. We’ll pick out a small group of teams, and I think by the time we get to this weekend we’ll hopefully have a couple workouts lined up for the end of next week.”

McGary still hasn’t gone through full contact drills and is expected to have team doctors from one team perform a physical and share the results with other teams. Despite McGary’s health, he still is hanging around the fringe of the first round. DraftExpress projects that the Spurs could take McGary at No. 30.

The Spurs are always on the lookout for quality frontcourt depth, and pending the results of his physical, McGary could be an intriguing option for them. He would have been picked much higher a year ago, and is the type of player who is willing to do the dirty work and play a role next to the established scorers the Spurs already have on their roster.

Glenn Robinson III is being featured in a YouTube documentary called ‘Journey to the League’ which you can watch below.

Robinson is still hanging around the edge of the first round on many mock drafts and ESPN’s Chad Ford wrote that he could be a fit at Houston at No. 25. DraftExpress likes Robinson at No. 29 to Oklahoma City.

Wing depth has long been an issue the Thunder have been looking to address, and a big athletic small forward like Robinson could be attractive late in the first round.

Robinson worked out with the Raptors on Wednesday and met with the media afterward.