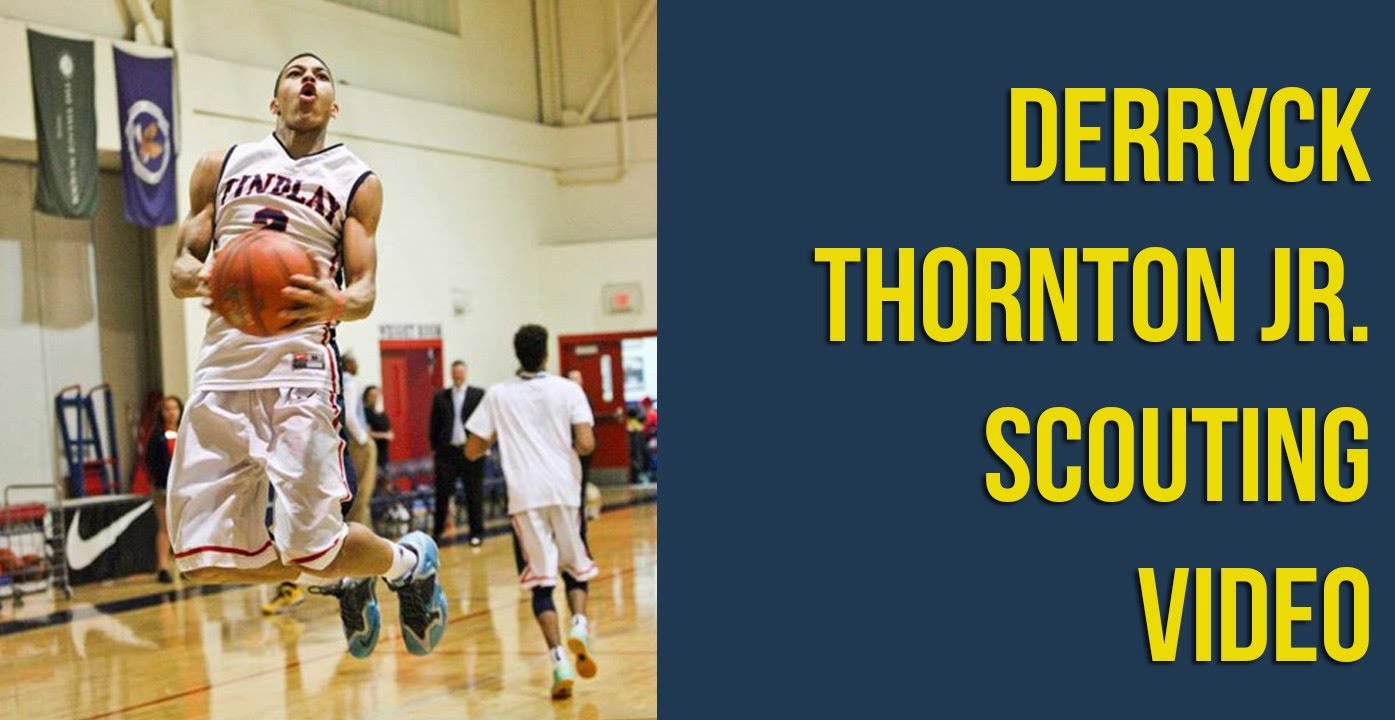 Derryck Thornton Jr. was one of the to performers at Michigan’s College Practice Camp and the five-star guard appears to be in line for a Michigan scholarship offer on June 15th. Thornton told UM Hoops on Tuesday evening that he ‘loves’ Michigan and would consider moving up his timeframe depending on the situation.

With all of the new attention on Thornton, we went to the film and broke down several games of video of the five-star guard. Watch our video in the embedded media player below or find a full scouting report after the jump.

Thornton is lightning quick with the ball in his hands and his defenders were hopeless trying to stop him when he had a head of steam and was in attack mode. He has a very tight handle and a vast array of crossover dribble moves. His vision is better in transition, although he made plays in both half court and full court settings. He is a tremendous shooter off the dribble and buried 15 to 19-footers with consistency off the bounce. He does a great job of reading screens and he has the quickness to reject them and drive, or go over them and knock down the mid-range jumper. As his ability to hit the roll man continues to develop, he should be very tough to guard in ball screen scenarios.

Thornton’s primary focus has to be improving his three-point shot. Right now his range is very consistent, especially off the bounce, out to just in front of the three-point line. His accuracy and consistency from three-point range left a bit to be desired. He was more capable shooting off the bounce than the catch, which is generally a tougher shot. His jumper is still a little bit flat, but he does get good elevation on his shot. He can get away with a lackluster three-point shot in high school, but his effectiveness on the ball screen at the next level will depend on his ability to extend his range.

Thornton was very good with the ball, and has an extremely impressive handle, but at times would let his attention lapse and could be a bit loose with the ball. These occasional turnover issues are nothing that can’t be worked out over time as his game develops, but something to focus on improving.

Thornton has the sort of raw ability – quickness and handle – that you rarely see in point guard prospects at this level. As he continues to refine his game, the sky is the limit for him in college and beyond. He plays with a number of high profile prospects and has the maturity in his game to get his teammates involved, not hog the ball like some other young guards. It’s obvious to see why John Beilein and his staff have been tracking him relentlessly over the last year.