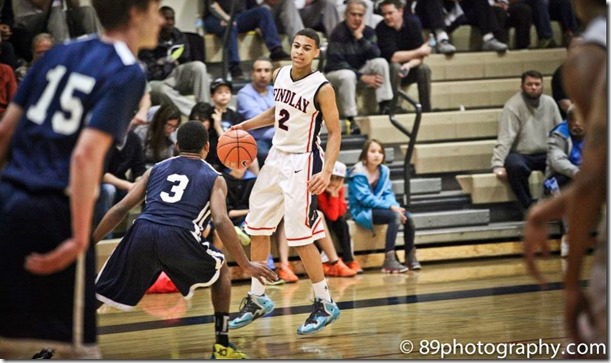 Michigan will extend its first scholarship offers to class of 2016 prospects on Sunday, June 15th. June 15th is the first day that college coaches can directly contact class of 2016 prospects and is also the NABC recommended first day to offer scholarships. John Beilein has been rigid in following this guideline throughout his time in Ann Arbor and this year is no different. Michigan is in strong position with a number of top 2016 prospects and will hope to build momentum in the class by extending its first offers.

Here’s a rundown of who could be expecting an offer on June 15th and the latest in their recruitment.

This is arguably the top tier on Michigan’s recruiting board that should be in line for a June 15th offer.

Derryck Thornton Jr.
Rank: No. 19
Visit: Full Unofficial, Camp
Offers:  Arizona, USC, UNLV, Cal, UConn and Miami (FL)
Latest:  Thornton’s visit to Ann Arbor was a home run and the 6-foot-2 guard is very high on Michigan. Top-20 prospects don’t often commit so early, but Thornton reported that he could consider an early commitment. Landing Thornton would be a home run for John Beilein and his staff and provide momentum for the class.

Tyus Battle
Rank: No. 11
Visit:  Full Unofficial, Camp
Offers:  Syracuse, Indiana, Ohio State, UConn
Latest: Battle has a close relationship with Thornton and his visit was also a success, but he still has a number of visits planned. He went to Villanova on Tuesday and is expected to visit Kentucky and possibly Louisville this weekend. Syracuse is also a major player in his recruitment.

T.J. Leaf
Rank: No. 16
Visit: Full Unofficial, Football Game
Offers: Arizona, Indiana, UCLA, Arizona State
Latest: Arizona, Indiana, UCLA and Michigan are the top four schools for Leaf right now. He took a recent unofficial to Michigan after an adidas AAU event in Indianapolis, but is in no hurry to make a decision. The 6-foot-9 forward is a dynamic wing scorer that would be a perfect fit for Michigan’s offense.

Seth Towns
Rank: N/A
Visit:  Full Unofficial, Camp, Football Games, Basketball Games
Offers: Virginia Tech, Xavier, Dayton
Latest: Towns is nearing double-digit visits to Ann Arbor and had a full unofficial visit this spring along with visits for many basketball games and most recently for Michigan’s College Practice Camp. He’s not as highly-ranked as some other prospects on Michigan’s radar, but he’s a great fit and would certainly qualify as a prospect that’s breaking down the doors to come to Michigan – given the number of times he’s been to Ann Arbor.

This group could be in line for an offer, but might have to wait it out.

Jon Teske
Rank: N/A
Visit: Camp, Basketball Game (OSU)
Offers: Ohio State, Dayton
Latest: Teske was solid at Michigan camp and is one of the few big men on Michigan’s radar that has shown serious mutual interest. Teske has been hearing from Michigan despite missing significant time this spring with an injury. Michigan has generally identified the big men recruits that it wants and gone after them (Jordan Morgan, Mark Donnal, Ricky Doyle) and Teske could fit that mold.

Cassius Winston
Rank:  No. 31
Visit:  Camp (2x), Unofficials
Offers: Iowa St, Michigan St, UMass
Latest:  Winston was one of the stars at Michigan’s College Practice Camp last weekend and has been up to Ann Arbor several times. Unlike Thornton, he’s still wide open with his recruitment  and isn’t in any hurry to make a commitment. Winston seems to check off all the boxes, but it wouldn’t be unheard of for the Wolverines to give Thornton the right of first refusal at the point guard spot before offering Winston.

Jamal Murray
Rank: No. 28
Visit: Basketball Game (vs Indiana)
Offers: Illinois, Michigan State, Virginia
Latest:  Murray hasn’t taken many visits, but has been to Ann Arbor to watch Michigan’s win over Indiana last season. He sees himself as a point guard, but at 6-foot-5 could project as an off-guard at Michigan as well. The question regarding Murray is whether he’s had a full unofficial visit with an academic tour or whether he’s just been for a game. If he hasn’t received the full tour, an offer might not be coming quite yet.

Quentin Goodin
Rank: No. 55
Visit: Unofficial, Camp
Offers:  Indiana, Western Kentucky, Vanderbilt, Stanford, UAB, Tennessee, Northern Kentucky, West Virginia, Murray State and Kansas State
Latest: Goodin performed very well at Michigan’s College Practice Camp and is yet another top-50 level guard on Michigan’s recruiting radar. He’s met the visit criteria, but the question is whether he did enough at camp to prove he’s in line for an early offer. Goodin told MLive.com that he thought he played well enough to earn and offer, but he plans to wait to make a college decision until August of 2015.

This group is firmly on Michigan’s radar right now, but expect the Wolverines to watch them more closely during July.

Kyle Guy
Latest: Guy is a lethal scorer, but Michigan coaches will be watching to see whether he can add size (weight and height) to develop into more of a true scoring off-guard rather than a point guard-sized scorer.

Eron Gordon
Latest: Gordon hasn’t visited Michigan yet (plans to visit for camp fell were rescheduled to later in June) and he’ll need to step on campus before discussion of a scholarship offer can start. The 6-foot-2 guard has put up monster scoring numbers on the adidas AAU circuit, but is more of an off-guard.

Matthew Moyer
Latest: Teammates with Seth Towns on the AAU circuit, Moyer is a dynamic player that has loads of potential as a 6-foot-8 forward with size, athleticism and some ball skills. He’s probably not quite ready for a Michigan offer yet, but his best basketball is ahead of him.

Barret Benson
Latest: Benson has camped at Michigan twice and has continued to improve his game. He didn’t dominate last weekend at camp, but still provides a lot of good tools for a big man. He’ll be one to track over July.