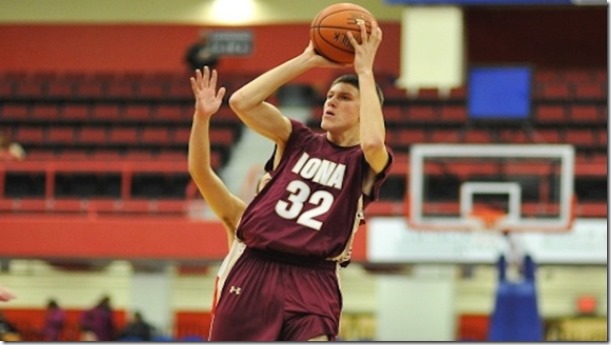 Much of Michigan’s recruiting attention has been focused on the class of 2016 in recent days as the Wolverines extended their first scholarship offers to rising juniors, but John Beilein and his staff are still tracking class of 2015 prospects as well.

One of those class of 2015 targets is 6-foot-7 wing forward Matt Ryan. Ryan has been sidelined since March after undergoing hip surgery for a torn labrum, but his rehab is going according to plan and he hopes to get back on the court soon.

“(The injury happened) during the middle of the season where I felt some discomfort, but the rehab is going really well,” Ryan told UM Hoops during a phone interview on Tuesday evening. “I had surgery March 3rd, so I’m about four months out of surgery and I feel really good. I was at the doctors today and they said everything was going really well and I’ve got about a month or a month and a half to go.”

Despite the surgery, Ryan still has plenty of major college interest. He was averaging 19 points, eight rebounds and four assists per game the surgery and is one of the best shooters in the country. His primary list of suitors includes Notre Dame, Stanford, Michigan, North Carolina, Duke, Marquette, Creighton and Arizona State. Ryan reported that most of the schools on his list had offered other than Michigan, North Carolina and Duke.

“Michigan, North Carolina and Duke, all three head coaches want to see how I am in a game after the surgery,” Ryan explained. “Once they see me play, I’m expecting offers from all of them.”

Ryan was drawing so much interest before the surgery because of his combination of size, shooting ability and versatility.

“When I’m completely healthy I’m pretty versatile,” Ryan admitted when pressured to describe his game. “I’m 6-foot-7, 220 pounds so I can play multiple positions on the offensive end and defensive end. I consider myself a really good shooter – that’s what I’ve been told – I can rebound a lot , I can really pass the ball, I have a really high basketball IQ and people don’t know that I’ve got some sneaky athleticism too.”

Ryan’s description sounds familiar to a player that Michigan just lost to the NBA, Nik Stauskas, and that was the first comparison that John Beilein made when he called Ryan on June 2nd.

“Our conversation went really well. The immediate comparison (he made) was Nik Stauskas and how much he developed during his two years there,” Ryan said. “Everybody thinks that I could do what he did and I’m probably the same size.

“He just said they weren’t necessarily looking for shooters in my class, but once (they had some early departures), now they have to replace them. Now he wants a shooter in the class and I’m their main guy.”

Wolverine assistant coach Bacari Alexander first reached out to Ryan before his injury this year, but John Beilein wants to see him play after his surgery before finalizing the next steps, including a scholarship offer.

“He hasn’t seen me play (a game) in person. Coach Bacari Alexander reached out to me during the season, but they want to see me play in person,” Ryan said. “They’ve seen a lot of film and they love me through the film, but once coach Beilein sees me in person and I go up to visit I should be getting an offer for them.”

The opportunity to return to the floor is a little over a month away and Ryan is hoping that he can make it back in time for AAU Nationals (starting July 24th) in Louisville, KY during the final week of the live evaluation period. He made it clear that he wouldn’t rush the return if he wasn’t fully cleared, but that’s his goal.

From there, Ryan hopes to schedule all five official visits before making a fall decision.

As things stand today, Michigan is in line to earn one of those visits.

“Yeah I definitely think I’m interested in visiting Michigan,” Ryan said. “Just seeing what they do with player development is really attractive and they’ve got a history with producing producing pros so it’s a really good place for me to take a look at.”

Ryan plans to schedule all five visits, but wasn’t ready to finalize a visit list until he finds out about some of the schools that haven’t offered scholarships yet. He won’t hesitate to make a decision if he finds everything that he’s looking for on a trip.

“I just want to go to a place where I know I’ll have a legitimate shot of playing freshman year and want to play in a system that fits me and what I want to do,” Ryan explained. “ I want to get up an down, but I also want some sets to be drawn up for shooters and just a good relationship with the coach and telling me what he wants to do there. “