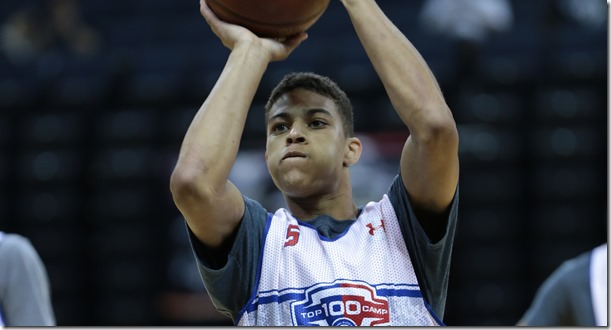 When Derryck Thornton Jr. left Michigan’s College Practice Camp two weeks ago, there was little doubt among spectators that he was one of the best point guards in the country. He had all of the tools – quickness, athleticism, passing ability, vision and a dynamite mid-range jumper – and he didn’t shy away from any competition. Thornton made plays for himself and others, but was most impressive with his defensive ability, making it a point to shut down other top guards in attendance.

Thornton added Michigan, Florida and Oklahoma offers last week and it appears that Kentucky might be next. He’s set to visit Lexington after NBPA Top 100 camp wraps up on Saturday and an offer is expected. But Thornton has also seized the opportunity to cement his status nationally as one of the top point guards in the country. Thornton played with a local AAU team this spring rather than playing on one of the high-profile Nike or Adidas circuits and hasn’t had nearly as much national buzz lately simply because many scouts haven’t seen him play.

That all changed this weekend at NBPA Top 100 Camp. Seemingly every national scout in attendance tweeted something about Thornton’s strong showing in Virginia.

“Watching Derryck Thornton absolutely dominate the competition tonight @ (NBA Top 100 Camp),” former Wolverine and camp director Tim McCormick tweeted, “(He) gets wherever he wants. So much Trey Burke in his game.”

Through four games, Thornton was averaging 9 points and his 5.5 assists per game were good for second best at the camp. Rivals expects his ranking to rise:

It has been a strong grassroots run for class of 2016 point guard Derryck Thornton. The Henderson (Nev.) Findlay Prep floor general looks to be due for a bump up from his current No. 20 national ranking because of his consistent play. Thornton excels in a high pick-and-roll, where his floor vision and the quickness with which he turns the corner puts defenders in bad situations. He’s also a very good on-the-ball defender and was playing at a high level on Thursday morning.

Northfield Mount Hermon’s Josh Sharma (2015), Aaron Falzon (2015), Ian Sistare (2016) and AJ Brodeur (2016)have been making the rounds across the Midwest over the past week. The NMH crew has visited Wisconsin, Notre Dame, Marquette, Purdue, Illinois, Iowa and even watched Nik Stauskas and Doug McDermott workout in Chicago.

NMH is Spike Albrecht’s alma mater and generally has its fair share of Division I level talent. Sharma is a top-100 big man and the highest rated of the bunch. He has shown up on Michigan’s radar of late and is a 2015 name to track this July if Michigan looks to add size to its roster.

There have been two constants for Jalen Coleman this spring: made jump shots and discussion of his plan to trim his list ‘soon’.

Coleman kept on stroking the ball at NBPA Top 100 Camp:

Is there a better looking jump shot in the class of 2015 than Jalen Coleman‘s? Rivals.com has seen a lot of ball this spring and we have yet to see a more crisp, clean, compact and aesthetically pleasing looking jumper than the one wielded by Coleman. The No. 31 player in 2015 is also a very good one- and two-dribble pull-up jump shooter but does need to get more strength and become a better finisher as a driver.

Hoopniks agrees with the assessment of Coleman’s smooth stroke.:

In this day and age most 6’4” scoring guards want to be known as point guards or combo guards. Jalen Coleman is refreshing as he knows he is a true shooting guard. In the EYBL, Coleman shot 50% from three connecting on 46-92 attempts. His textbook jump shot was on display today as he knocked in numerous outside shots. He started with a feathery 15 footer from the right corner and then started knocking in three’s from a variety of areas. Coleman is a pure scorer, but one that is more than just a standstill outside shooter. While his points came from outside the paint, Coleman has the athletic ability to get by his defender.

Coleman is averaging 9.5 points per game in NBA Top 100 camp action,but he continues to say the same things about his recruitment ($): “When I go back home and talk with my family I will put something out there.”

Expect Michigan to make the cut whenever Coleman trims his list, but don’t expect him to rush things anytime soon.

Michigan’s other class of 2015 shooting guard offer, Eric Davis, is averaging 14.5 points per game (tied for third best at the camp and leads the field in in free throw attempts. Here’s video footage of Davis going for 32 points on Thursday night.

“We’re going to go visit Kentucky but my AAU coach is working with those guys on that and then Butler is a few minutes away so we’ll spend some time there,” Eric Sr. said. “And I’m sure at some point he’ll do something unofficial at Indiana. He just hasn’t. He’s been there as a fan watching his brothers play so he’s not had any kind of visit. So at some point I’m sure we’ll do that.”