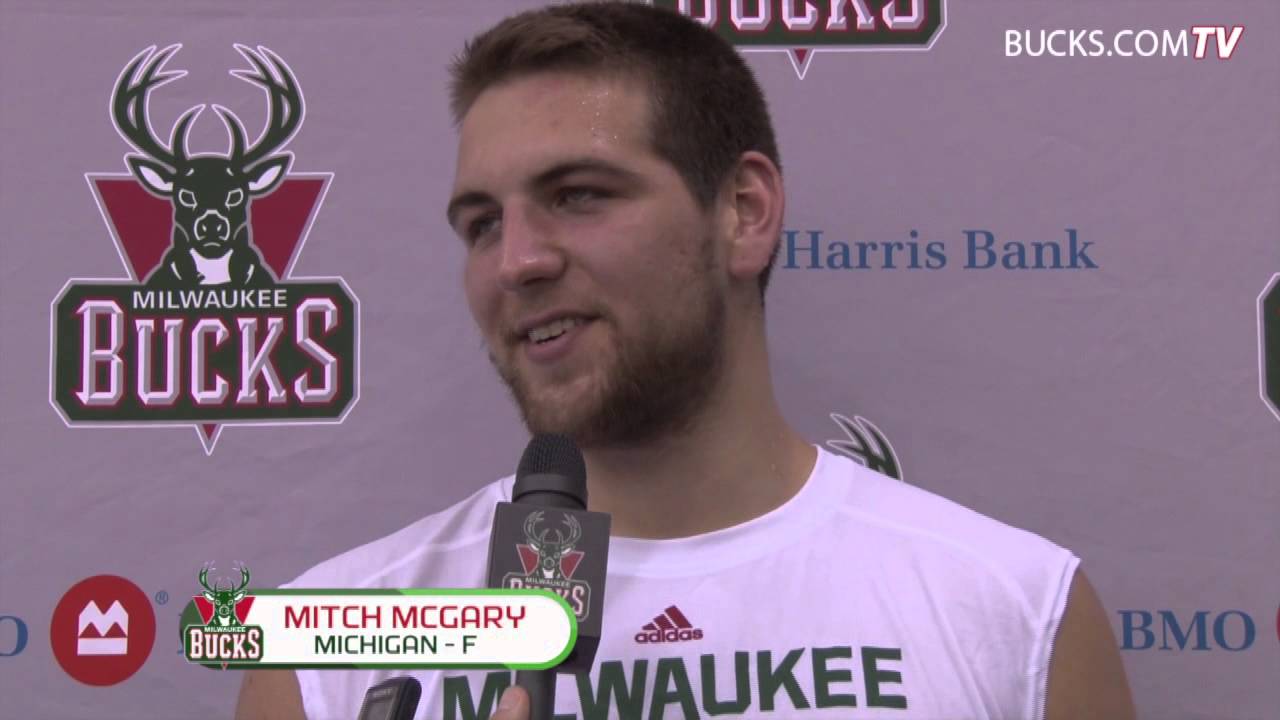 Mitch McGary worked out for the Milwaukee Bucks over the weekend, but he hasn’t and won’t have a physical before the NBA Draft.

“We’re comfortable with it,” McGary’s agent, Mark Bartelstein told MLive on Monday. “It’s a decision we’ve made that we think will be best for Mitch.”

McGary spoke with the media after his workout in Milwaukee (see the video above) and appears to be comfortable with his situation.

“It’s a little different, my situation with the surgery and everything else going into (the draft),” McGary said. “I thought this was was the best possible outcome for me — having a couple of limited workouts and getting my body back to where it needs to be and have the best chance in the draft. I talked to the assistant GM and the GM and they’re definitely interested in me.”

Things might be working out for McGary because there’s a possibility he has a draft promise from a team in the final third of the first round.

“It’s hard to draft a guy off four great weeks. He’s a rugged inside scorer who can pass it, has decent feel. I’m concerned about his conditioning. Some of that is because he’s had back issues. The people at Michigan adore this guy, and not just his teammates. The nerds in the chemistry lab think Mitch McGary is the coolest guy on campus. The back thing is more of a concern than the weed thing. The weed thing, that’s three-quarters of the NBA right there. We’ve done some background checking on him, and it doesn’t sound like there’s an issue there. Just a stupid college kid at a party.”

The talk of a draft promise last week sounded premature, considering McGary worked out for a team picking in the second round, but ESPN’s Jeff Goodman suggests it in his recent mock draft and Chad Ford agrees.

Ford listed the Jazz, Rockets, Heat, Suns and Spurs as potential late round fits for McGary, but added that the Hornets at No. 24 might be most likely.

“Hearing Hornets at 24 most likely destination for Mitch McGary to land,” Ford added. “Source says they are the culprit of his draft workout shutdown”

It does seem like the uncertainty could also play in his favor late in the first round as teams don’t want to miss out on his talent, even if there may be some question marks regarding his back. Most mock drafts still have McGary on the fringe of the first and second rounds.

Nik Stauskas will be in the green room on Thursday evening and his stock has done nothing but rise in recent weeks. Seth Davis’ report from NBA scouts on Stauskas is glowing:

“Cannot say enough good things about that kid. He’s a big-time shooter, good size. More athletic than people think. Big fan. The guy is bouncier than you think and he can really pass. I think he can come in and play right away. I like his cockiness.”

Stauskas has worked out for the Kings, Nuggets, Wolves, Warriors and Lakers and is expected to be taken in the 6 through 12 range on draft day. He has also stepped up as a voluntary spokesperson for the Heart and Stroke Foundation after his grandmother suffered a stroke in February.

There’s not quite as much buzz surrounding Glenn Robinson III. ESPN’s Chad Ford writes that Robinson could end up in Milwaukee where his father played.

“Robinson would give the Bucks yet another long, athletic player,” Ford wrote in his latest mock draft. “This time a player caught between the 3 and the 4. Robinson is another high-upside player who could be terrific if he ever gets a jump shot.”

‘Finch’ isn’t so high on Robinson:

“I wish he had gone back to school. He was so up and down for two years. People questioned his motor because he has a tendency to float. I was disappointed he wasn’t a better rebounder, because they played him at the four. I’m not sure what he does that’s special. The biggest thing with him is mental toughness. Sometimes he goes and hides.”