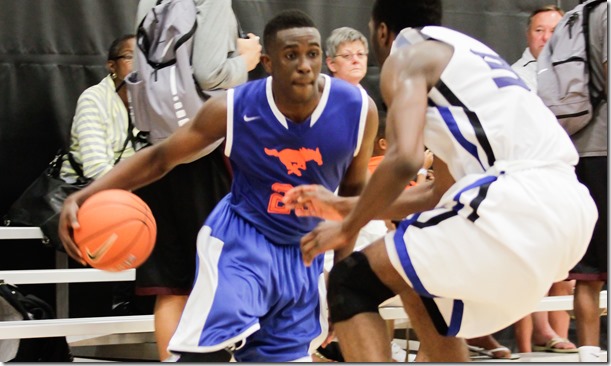 Prince Ali hasn’t been an uncommitted recruit for long, but he’s already drawing interest from a number of schools across the country. The decision to decommit is never easy, but the 6-foot-4 guard opted to open things up on May 29th after previously committing to UConn in November, 2013.

The explosive guard from The Sagemount School in Florida averaged 21.8 points, 4.8 rebounds and 2.1 assists per game on the EYBL circuit this spring, and his strong performances have seen his recruiting stock soar. Ali listed Michigan, UCLA, UConn, Indiana, Florida State and Nebraska as the main schools involved in his recruitment since he decommitted from UConn.

“I’m a score-first guard,” Ali said when asked to describe his game. “I can score a variety of ways. I can hit open threes, I can get in the lane and I can finish at the basket with my athleticism. I can also defend positions one through three.

“I see myself playing more of a combo guard (in college). I’m not the point guard, but I can (handle the ball).”

Ali was the No. 3 scorer in the EYBL this spring and despite being known most his athleticism, he shot 39% from three-point range. Slashing to the basket is still the strong suit of his game according to an ESPN scouting report that named him the best slasher at the Minnesota session of the Nike EYBL

“(Ali) attacks the rim on a regular basis,” ESPN’s Reggie Rankin wrote. “He splits defenders for uncontested layups and finishes with great touch and body control. He plays with good energy and urgency and does an excellent job keeping defenders on their heels. ”

Michigan and head coach John Beilein reached out to Ali the day after he decommitted, and there’s genuine mutual interest between the two parties. Beilein has been handling Ali’s recruitment directly and the guard has had positive conversations with Michigan’s head coach.

“(Coach Beilein) just talks about what my role would be if I came to Michigan and what he’s looking for in a player,” Ali said. “He told me he’s definitely going to come watch me play in July.”

Expect Michigan to watch Ali the first weekend of the July evaluation period at the LeBron James Skills Academy in Las Vegas. The Wolverines are also likely to be in attendance at Nike Peach Jam the following weekend where Ali will be playing with his Southern Stampede EYBL team.

Ali is already familiar with the Michigan program and is impressed with Michigan’s ability to develop guard talent.

“I am familiar with Michigan,” Ali said. “The Fab Five came out of there and I’ve seen what their guards have been able to do, such as Trey Burke and Tim Hardaway, so I’m very familiar with what they do and I understand that they let their guards go, let them play.”

Ali plans to take visits this fall before starting to narrow things down in September and October and then making a decision before the start of his senior season. He’s confident he wants to take an official visit to UCLA and he’s positive that he wants one of his official visits to be to Michigan.

“I most definitely am going to take a visit to Michigan,” Ali said.