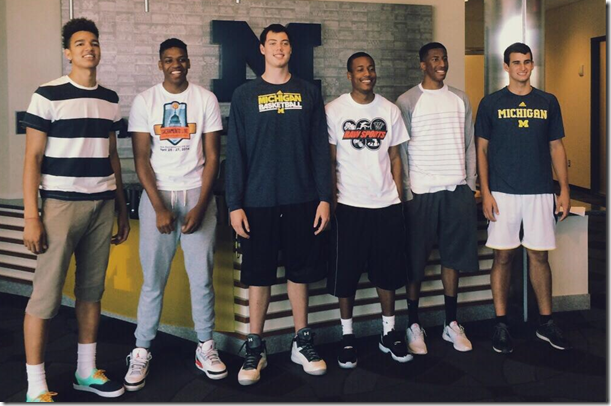 Michigan head coach John Beilein will be in Brooklyn on Thursday evening at the NBA Draft with Nik Stauskas. His trip to New York City will be a happy farewell to Stauskas, Glenn Robinson III and Mitch McGary, but when he returns to Ann Arbor it will be back to business.

Michigan’s freshmen arrived on campus over the weekend and the summer session will be critical in preparing a roster that features seven players with freshmen eligibility for the 2014-15 season.

The live evaluation period in July will be critical as Beilein looks to build out future rosters, but precious time with the incoming class will be utilized to create a plan for this season as well. Two of Michigan’s incoming recruits were late additions, meaning that most of their evaluation process was abbreviated. Hands-on practice time will help the coaching staff figure out what pieces it has to work with.

“We’ll dive right in there and from then on it will be two hours per week,” Beilein explained. “There will be eight hours a week. That’s two hours with us (the coaching staff) and the six hours, the most important part, will be with (strength and conditioning coach) Jon Sanderson.”

Summer practice sessions will be expanded in August with NCAA-allowed practice time in preparation for Michigan’s trip to Italy.

“It’s a great summer for us to develop.”

Caris LeVert underwent foot surgery to repair a stress fracture in early May and remains sidelined. The 6-foot-6 guard is Michigan’s top returning scorer and is projected as a first round draft pick in the 2015 NBA Draft.

Beilein sees his injury as a valuable opportunity to rest after a grueling season.

“We’ve turned this into a positive with Caris,” Beilein said. “He’s such a gym rat and he’s been off his feet now for almost two months and I think that’s really good from a standpoint that he will just shoot all day long.

“Given the foot injury, it’s good to give him time to just recover form a long season but we expect him to be back in a couple more weeks and be ready to go so he’s doing well.”

LeVert’s recovery time frame means that he should be available for Michigan’s trip to Italy and the practices preceding it.

Derrick Walton was Michigan’s starting point guard from the time he stepped on campus last season, performing very well and earning a spot on the All-Big Ten Freshman team, but expectations will be higher in his sophomore season. Especially after players like Darius Morris, Trey Burke, Nik Stauskas and Caris LeVert have all made radical improvements from year one to year two under John Beilein.

According to John Beilein, those improvements will start with extending the range on his three-point shot.

“His range coming in, where he was a very good shooter he would step on the line continually and it was because he jumped forward a great deal,” Beilein explained. “Since he’s been here we’ve slowly been trying to get him to use his legs more. Of course you use your legs more if you shoot it on the way up. “

Walton looked tremendous shooting the balls during drills and demos at Michigan’s College Practice Camp earlier in June. Beilein has also seen similar improvements during the limited exposure he’s had to Walton this summer.

“He’s only done four hours of workouts this summer, but his range has really increased,” Beilein said. “That’s huge, it’s a big difference maker to have range beyond the NBA line.”

Notes: Beilein said Ricky Doyle is 6-foot-9, but is “as long as we’ve ever had” at Michigan in terms of vertical and horizontal reach. He admitted he’s heard good things about Doyle in open gym sessions, but wants to see for himself. “Those are the reports,” Beilein admitted. “I don’t believe any reports until I get to see him first hand.”