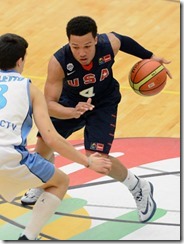 Michigan is set to host two top 50 guards in the class of 2016 this weekend.

Indianapolis combo guard Eron Gordon is scheduled to visit Michigan on Friday and California point guard Devearl Ramsey (Sierra Canyon, CA) will be in for an unofficial visit over the weekend.

Ramsey’s high school coach confirmed the visit plans for this weekend. Ramsey is a four-star prospect and ranked as the No. 32 player in the country according to 247Sports Composite. The 5-foot-11 guard averaged 9.9 points, 3.1 rebounds and 3.1 assists per game on the Nike EYBL circuit with California Supreme this spring. He is best known for his defensive abilities and his motor, according to a recent ESPN scouting report.

If there is one consistent area of Ramsey’s game that coaches can depend on each and every time out, it would be his energy level. The shifty point guard plays with a bulldog mentality at both ends and is as quick as they come off the dribble.

Indianapolis guard Eron Gordon will be on campus Friday after visiting Duke on Monday. Gordon is also coming off of a recent visit to Louisville and he holds official offers from Indiana, Purdue, Arizona State and Nebraska.

Gordon averaged 23.4 points per game on the Adidas Gauntlet circuit, third best in the league,

Michigan has already extended scholarship offers to Derryck Thornton, Tyus Battle, TJ Leaf, Cassius Winston, Quentin Goodin, Seth Towns and Jon Teske in the class of 2016, but Ramsey and Gordon could both be offer candidates following their unofficial visits.

Cassius Winston made it back to campus on Sunday for another unofficial visit. Winston had been on Michigan State’s campus earlier in the weekend participating in the Spartans’ team camp, where he excelled and knocked down a sudden death game winner in front of Tom Izzo.

Despite the rash of recent offers and attention and the fact that Winston seems to dominate whatever camp he attends (Michigan, Detroit and Michigan State in the last two weeks), he’s in no hurry to make a college decision.

“It’s still way too early,” he told Next Up Recruits, “but it’s nice to have both of those (Michigan and Michigan State) offers.”

Derryck Thornton Jr. (NBPA Top 100 Finals MVP) followed up his big weekend at the NBA Top 100 Camp (full footage below) with a trip to Kentucky.

Thornton discussed his Kentucky trip and offer with ZagsBlog and said it was a ‘great feeling’ to get a Kentucky offer. The potential package deal between Battle and Thornton remains on the table as well according to both of their fathers.

“And after speaking to Gary and Tyus, it sounds like they want to play together as well.”

As of right now, four schools have offered both players including Kentucky, UConn, Michigan and Florida. Battle is expected to visit UConn on Thursday.

Jalen Coleman continued his steady play at the NBPA Top 100 Camp, averaging 9.1 points per game and shooting 41% on 27 three-point attempts. Here’s footage of Coleman in action.

Eric Davis (12 points per game) also had big showings at camp and earned their own highlight mixtapes.

Davis is planning official visits to UCLA and UNLV with an unofficial scheduled for Kentucky. He’ll also tryout for USA Basketball according to Rivals.com.

Jalen Brunson averaged 12 points and 5.5 assists per game while helping Team USA to the FIBA Americas U18 gold medal in Colorado Springs. Brunson has enjoyed playing with such a talented group.

“It’s so much fun because you don’t have to do it all yourself,” he said after an early win. “There’s so much offensive power; you have so many guys that are willing to pass the ball, so just having that, having that mindset really helps.”

After scoring 12 points in the gold medal game, Brunson discussed the feeling of winning a gold medal with Team USA.

It’s a surreal feeling just to know that I’m a gold medalist now,” he said. “This is something I can never forget about. It’s something that’s always something to think about – how hard I’ve worked. This is the farthest I’ve ever been. It’s a great feeling. It just sets the pace for next year. I want to come back and try to win another one at the (FIBA U19) World Championship.”

Michigan remains in Brunson’s top eight list of Illinois, Kansas, Michigan, Michigan State, Purdue, Temple, UConn and Villanova, but Temple, Villanova and Illinois are thought to have the most momentum in his recruitment.