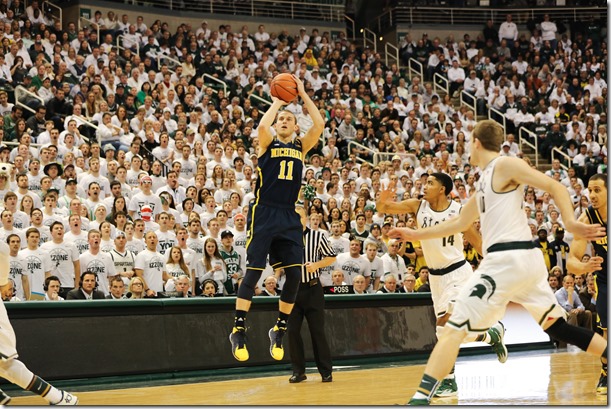 The Sacramento Kings selected Nik Stauskas with the 8th pick in the 2014 NBA Draft this evening.

The pick was first reported by Yahoo! Sports Adrian Wojnarowski.

Stauskas was the first Wolverine selected in this year’s draft and his selection means that Michigan has had a lottery pick in each of the past two seasons. Stauskas led Michigan 17.5 points and 3.3 assists per game last season and was named Big Ten Player of the Year after leading the Wolverines to an outright Big Ten Championship.

“A lot of guys who come to Michigan are under-recruited and we play with a chip on our shoulder,” Stauskas said on ESPN after being selected. “I think me and Trey both felt like we had something to prove and coach Beilein and the assistants have all done a great job, gave us a great system to play in and we’ve really succeeded in it.”

Stauskas is Michigan’s highest draft pick since Jamal Crawford was selected 8th in the 2000 NBA Draft.