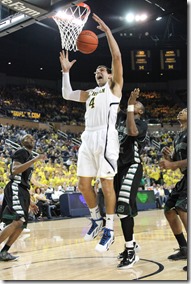 Nik Stauskas, Mitch McGary, Glenn Robinson III and Jordan Morgan will all hope to hear their names called tonight during the 2014 NBA Draft.

Stauskas will be watching from the green room in the Barclays Center and is expected to be a lottery pick. Rumors have swirled that McGary has a promise somewhere in the 20. Robinson is projected on the fringe of the first and second rounds and will hope to hear his name sooner than later after a grueling workout tour. Morgan worked out for a handful of teams in recent weeks and hopes to continue his career at the next level.

Projections for Nik Stauskas appear to be in the 8 through 13 range. Charlotte has been thrown around as a potential destination, but the Hornets could also be looking at Doug McDermott at that spot. Regardless, Stauskas will be at the Barclays Center with his family, friends and Michigan head coach John Beilein waiting to hear his name called.

There are multiple reports that Mitch McGary has a draft promise in the 20s which could make for a happy ending to McGary’s rollercoaster ride of a sophomore year that saw him injure his back and then earn a year-long suspension for failing a drug test at the NCAA tournament.

For his part, McGary doesn’t know about any promises.

“It’s kinda crazy,” he said on Wednesday night. “I really don’t know anything about it.”

“It’s pretty surreal,” McGary told MLive. “I haven’t even thought about my dreams coming true tomorrow. That’s going to be pretty cool when my name gets called.”

“I’d like to be (picked in the first round) but if it doesn’t happen, it doesn’t happen,” McGary said. “I just wan to play in the NBA at the highest level and hopefully get back to where I can be an elite level player.”

Milwaukee has only worked out for the Bucks, so Occam’s razor could suggest that his most likely landing spot would be in the early thirties to Milwaukee, but we will find out this evening.

Glenn Robinson III is projected as a first round pick in about half of the mock drafts published by major outlets. He has worked out for 18 teams and could be an option for a number of teams selecting late in the first round or early in the second. The Suns, Thunder, Clippers and Bucks all appear to be potential landing spots for Robinson.

The workout tour has been stressful on Robinson, but he’s hoping for the best.

“Sometimes I woke up the next morning and was like, what city am I in?” Robinson said in an interview with the Detroit Free Press. “The workouts aren’t even the hard part. It’s all the traveling.”

John Beilein thinks Robinson has been over-analyzed, at times unfairly.

“Frankly the expectations were so high on him and they were unfounded in some ways,” Beilein said during a WTKA interview on Wednesday. “Just let the young man grow as he gets better. I have a lot of confidence that’s he going to be a great pro.

“That’s all part of the process of him playing different positions, being more on the perimeter shooting more threes, driving it, doing different things and I thought he made great progress. He played as well as anybody on our team in the NCAA tournament.”

Jordan Morgan may not have his name called tonight, but he’s been on the NBA Draft workout circuit as well. Morgan has worked out for the Timberwolves, Bulls and Cavs and should earn an invite to summer league if he’s not selected.