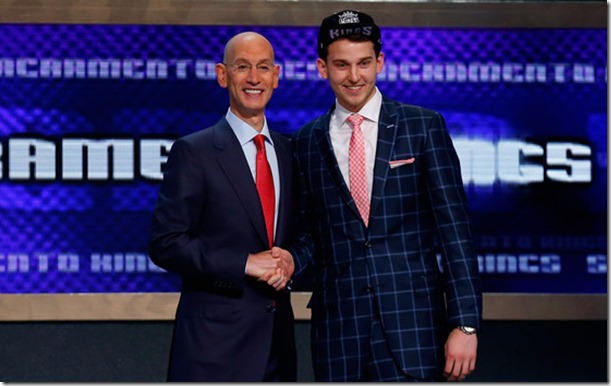 Nik Stauskas was selected eighth overall by the Sacramento Kings on Thursday evening. After being selected, Stauskas discussed his future in a press conference at the Barclays Center. Read the full transcript of his press conference below.

Q.  Nik, if you could just start opening statements, feelings about getting drafted.
NIK STAUSKAS:  This is a huge honor for me.  This is something I’ve been working towards since I was 7 years old.  The fact that I’m sitting here in front of all you guys now is just‑‑ I can’t put this into words.  I’m excited to be a member of the Sacramento Kings.  I’ve only heard good things about the city and the organization.  So I’m excited to get to work and help this team win.

Q.  Nik, congratulations.  In your wildest dreams until maybe a few weeks ago, did you think you’d be a No.8 pick in the NBA Draft?  How do you feel about that?
NIK STAUSKAS:  I always believed it.  I believed in myself, and I don’t think many other people did, but this is something I always felt is a possibility for me, and I just kept working my hardest to make it happen.
It sounds‑‑ it’s a cliche, but dreams really do come true when you put all your effort into it.  So I’m just glad Sacramento picked me, and I’m not going to let them down.

I always believed it. I believed in myself, and I don’t think many other people did.

Q.  Nik, congrats.  How much of the Kings have you watched?  And how do you feel like you fit in with their personnel?
NIK STAUSKAS:  I haven’t really watched a lot of their other games, but I know they got a strong young core.  I know they got DeMarcus Cousins, Isaiah Thomas, Ben McLemore, Rudy Gay, a lot of strong players on the team.  I know they struggled with shooting the basketball in the past.
Immediately, I think I can be a guy that comes in and helps stretch the floor and knock down shots for them.  So I’m excited to do that.

Q.  Nik, I wanted to ask you, talk about coming up with the University of Michigan with topnotch players like Trey Burke and Glenn Robinson, Mitch McGary, Tim Hardaway Jr.  How was that motivating for you to build your game up?
NIK STAUSKAS:  Playing with guys like Trey and Tim my freshman year, it helped me a lot because I saw the level of commitment and the talent and the work ethic and everything that they put forth.  To see them this year have all that success in the NBA just made me confident in myself because I know I can do what they did.
So it helped a lot playing with them, and I learned a lot from them my first year with them.

Q.  Nik, you played at St. Mark’s in high school, not a lot of people know that, with another NBA player, Erik Murphy of the Utah Jazz.  Have you talked to him?  Have you picked his brain at all about what your first season in the NBA might be like?
NIK STAUSKAS:  No, actually, I don’t‑‑ I haven’t been in contact with Erik.  So I haven’t really talked to him about that.

Q.  Nik, what has been the biggest key during your time at Michigan to turn what you said was a dream into something that’s now a reality?
NIK STAUSKAS:  The biggest what?

Q.  The biggest key of what you gained at Michigan.
NIK STAUSKAS:  I think over my‑‑ over the summer coming into my sophomore year, I added a lot of strength and speed and athleticism, which helped me kind of be more versatile this year.  At the same time, I feel like I’ve just made a lot of strides on my mental game and just being more confident in myself and believing in myself, you know, even when things aren’t going my way.
I think those are the two biggest keys for me, as well as Coach Beilein and the rest of the coaching staff there, they did a phenomenal job of putting me in the right spots and the right positions to be successful.

Q.  When you were deciding on a college, how much did NBA prep play into your decision?
NIK STAUSKAS:  When I decided to go to Michigan, the thing that was really attractive was I thought I could play right away, and I thought I could play on a very good team.  Any time in college basketball when you’re playing a big role on a good team, you’re going to have a chance to get to that next level.  So that’s all I could ask for.

Q.  So Andrew went 1, and you came off the board a little bit later.  How much does that mean for Canada and your country?  Have you and Andrew talked about it at all?  How much does it mean to you guys representing your country?
NIK STAUSKAS:  It means a lot.  It means a lot to us, for sure.  I talked with Andrew the last couple of days, just being here in New York at the same time.
We’re very excited for the future of Canada basketball.  I feel like, if we really all commit to coming in and working hard and coming together, I think we could have a really good team.
I’m not saying we’re going to win a gold medal right now, but I’m saying that we could have a chance to compete at that level if we really‑‑ if we all commit to it.

Q.  Nik, congratulations, amazing.  What was that little thing with your dad?  Can you explain and take us through it blow by blow, please.
NIK STAUSKAS:  It was planned.  A planned handshake that we thought of last night.  I always just throw up the three goggles.  So I thought it was only appropriate I did it here.

Q.  Were you worried about your dad being able to execute under pressure?
NIK STAUSKAS:  A little bit, yeah.  It was a little pressure, but he got it right.  So I’m happy.

Q.  Nik, Michigan is a very good school academically, great campus like Zingerman’s, the art festival in Ann Arbor.  Was it an easy decision?  There must be a tough decision to say, I want to leave early, because it is a great school.  Was there part of you that said, I should get my degree here and then go to the NBA?
NIK STAUSKAS:  I definitely thought about it, but the biggest thing for me after this season was I felt like I was ready.  I thought I had improved enough throughout the year, and I had made a lot of strides in my game and made the necessary improvements to make that jump to the next level.
Like I said, this has been a dream of mine my entire life.  The fact that I had the opportunity to do it now, I feel like this is the right time.  I understand that I could always go back and get my education after, which I fully plan on doing.