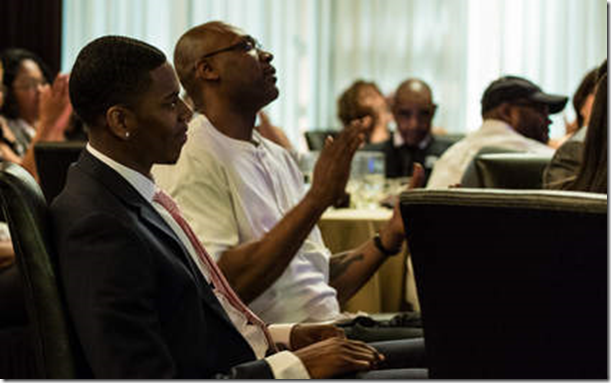 A year ago Joe wrote that it had been nearly 20 years since two Wolverines heard their names called in the first round of the NBA Draft (Jalen Rose and Juwan Howard in 1994). Michigan made it back-to-back season last with a pair of first round picks last night. Both Nik Stauskas and Mitch McGary’s names were called by NBA commissioner Adam Silver as they became Michigan’s 52nd and 53rd players drafted to the NBA.

Stauskas was Michigan’s second lottery pick in as many years and Michigan’s highest draft pick since 2000 when Jamal Crawford was selected eighth. Michigan’s entire starting lineup in the 2013 National Championship has now been drafted and four players were picked in the first round.

“No I did not see this,” Beilein responded on Wednesday when asked if he ever expected to stockpile so much talent. “It’s happened so rarely and we knew we had a lot of talent, but as they continued to develop then we realized that we had something special. But I think you never see it until it’s completed.”

Michigan had only one played drafted from 2000 to 2011 (Bernard Robinson Jr. at 45th). The Wolverines have now had six draft picks in the last four drafts. Burke, Stauskas, McGary, Hardaway and Robinson are gone, but Michigan is just getting started.

Michigan is pumping out NBA talent, even if that was never the original plan. John Beilein didn’t set out to build a one-and-done program (all of his draftees have attended school for at least two seasons), he set out to win games his way. The Wolverines are pumping out NBA talent simply because his way has worked so well. Michigan has one of the best coaching staffs in the country, recently signed to extensions, and it has state of the art facilities. Most importantly, the Wolverines have been winning. Michigan has won more conference games than any team in the Big Ten over the past three seasons and isn’t showing any sign of slowing down, even as it celebrates draft night once again.

Suggesting that Nik Stauskas would have been a top ten pick at this time last year would have been laughable. He had a great freshman season, but there wasn’t a scout, writer or fan that expected him to be suited up in the green room in June.

“I always believed it,” Stauskas said after being selected. “I believed in myself, and I don’t think many other people did, but this is something I always felt is a possibility for me, and I just kept working my hardest to make it happen.”

His meteoric rise is a testament most of all to his tireless hardwork, but also the player development opportunities at Michigan.

“I think over the summer coming into my sophomore year, I added a lot of strength and speed and athleticism, which helped me kind of be more versatile this year,” Stauskas said on the podium after being drafted. “At the same time, I feel like I’ve just made a lot of strides on my mental game and just being more confident in myself and believing in myself, you know, even when things aren’t going my way. I think those are the two biggest keys for me, as well as Coach Beilein and the rest of the coaching staff there, they did a phenomenal job of putting me in the right spots and the right positions to be successful.”

Stauskas put in the work and he’s arrived. He’s fully confident that he can make an impact in Sacramento.

“I know they got DeMarcus Cousins, Isaiah Thomas, Ben McLemore, Rudy Gay, a lot of strong players on the team,” Stauskas said. “ I know they struggled with shooting the basketball in the past.
Immediately, I think I can be a guy that comes in and helps stretch the floor and knock down shots for them.  So I’m excited to do that.”

The rumors that Mitch McGary had a draft promise proved correct, except the promise was even higher than most imagined. The Oklahoma City Thunder selected McGary with the 21st pick in the draft and the selection was part of a ‘secret promise’ according to Adrian Wojnarowski.

John Beilein raved about McGary during a radio interview on Wednesday, focusing on his motor and hinting that he could be a first round pick.

“His motor is what stands out to me and just about everybody else,” John Beilein said on Wednesday .”That’s one thing that really is extremely important for him going forward. I believe right now he’s in great shape and when he’s in great shape he can play all day long. I’m really happy for him right now that he’s rebounded and put himself in position so that he can be a first round draft choice.”

“We’re thrilled to add a player like McGary,” Presti said. “He’s a guy who has an incredible amount of intangibles that we look for. Number one, he brings an energy and a physicality to the floor. He’s a guy that plays with a great basketball IQ and is able to play a couple different positions.”

McGary has a perfect opportunity in Oklahoma City, where he’ll be asked to play a critical role off the bench for a winning organization that should compete in the NBA Playoffs from day one.

“When you have a player who you thinks fits not only your playing identity, but also fits into your roster building construction as you look forward, I think (McGary) was not only a playing addition but also a strategic roster-building addition as well,” Presti explained.

John Beilein is starting to get the hang of this NBA Draft thing. Michigan’s head coach was in the green room with Nik Stauskas and his family, and hung around throughout the entire draft, even tweeting that Mitch McGary was about to be picked. He also stayed in the green room all night, waiting to see if all of his players were drafted – including Jordan Morgan.

Morgan had worked out for a handful of teams, but wasn’t on any mock drafts or projections. Morgan wasn’t drafted, but will play his summer league ball with Minnesota in Las Vegas. But Beilein was going to wait until the final pick to see if he was selected. Morgan’s name wasn’t called on Thursday night, he’s expected to be signed to a summer league team.

Glenn Robinson III missed the first round, despite Adrian Wojnarowski tweeting that Oklahoma City seriously considered him at No. 29 before taking Stanford’s Josh Heustis. The Thunder would have been a great fit for Robinson, who would have been reunited with his best friend, roommate and long-time teammate Mitch McGary. Robinson ended up slipping to No. 40 in the draft, but his selection marked the first time three Wolverines were picked in the same draft since 1990.

Flip Saunders told reporters that Robinson was No. 26 or No. 27 on their draft board, praising his athleticism, stating he thought he was a first-round talent and revealing that John Beilein provided a strong endorsement earlier this week.

John Beilein thinks Robinson will find his way at the next level, and pointed out on Wednesday that Robinson is still very young.

“He’s the youngest of any player that we’ve had go to the NBA,” Beilein said. “This is what I think it’s difficult for people to understand. During those ages from 18 to 19 to 20 your basketball development can go so quickly. Last year at this time Nik Stauskas wasn’t on a draft board.  Glenn went through this stage of assimilating to being in the backcourt more, doing some things. Frankly the expectations were so high on him and they were unfounded in some ways. Just let the young man grow as he gets better and I have a lot of confidence that’s he going to be a great pro”