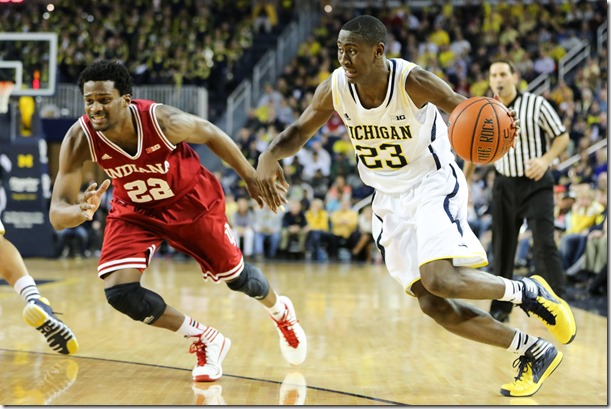 Michigan can’t stop sending players to the NBA and junior guard Caris LeVert appears to be next.

The 2014 NBA Draft is in the books, which means national media outlets are already shifting their focus to the 2015 Draft. LeVert’s name is everywhere.

CBS projects him as the No. 10 pick, DraftExpress has him at No. 21, two mock drafts at Bleacher Report have him projected 8th and 16th. NBADraft.net has LeVert as high as 7th overall, while ESPN’s Chad Ford writes that he could be “end up in the late lottery to mid-first round with an excellent season.” The Big Ten Network also projects LeVert as the best draft prospect in the Big Ten next season. SBNation also slots LeVert in the top ten at No. 9.

Discussion of next year’s draft at this time of year is obviously speculative at best. Remember, Nik Stauskas wasn’t in the discussion a year ago, but Mitch McGary and Glenn Robinson III were supposed to be lottery picks. Stauskas was selected 8th, McGary and Robinson both slipped to 21st and 40th respectively.

Nothing is guaranteed. Injuries happen, development stagnates and prospects are so often over-hyped by draft outlets early on in their careers.

Robinson was projected as a lottery pick last summer because of his raw abilities. He had the leaping ability, but people just expected him to make the transition  from being a role player into a primary scorer overnight with no issues. LeVert’s situation is different because he’s already shown parts of his NBA skillset on the court. People have seen LeVert produce, he just needs to get bigger and stronger while proving that he can lead a team.

That transition won’t be easy. As good as LeVert was — he was arguably Michigan’s best player over the final third of the Big Ten season — he was still No. 2 on most scouting reports. Nik Stauskas demanded the attention of a primary defender at almost all times. LeVert will have some help this year, but he won’t have No. 11 flanking him on the wing.

So don’t pigeonhole LeVert into next year’s lottery just yet, but there are still more than a few reasons to expect that LeVert will be sitting in New York City next year on draft day.

It’s very rare for juniors to be viewed favorably in the eyes of NBA scouts. This year, just one junior (Louisiana-Lafayette’s Elfrid Payton) was selected in the first round of the draft. But LeVert isn’t an ordinary junior as he will be just 20 years old next June when the draft takes place. He’ll be closer in age to a typical sophomore and even some freshmen than the average junior. His age should be a bonus to NBA teams eager to get their hands on the youngest talent available.

Nik Stauskas went from fringe top-100 player to No. 8 pick and LeVert could come close to one-upping his meteoric rise. LeVert was just a two-star recruit out of high school and wasn’t on most major college’s recruiting boards. In a season where little was expected of him, LeVert averaged 13 points, four rebounds and three assists and shot 40.8% from three-point range, helping Michigan to an outright Big Ten Championship. LeVert will have even more possessions at his disposal in 2015 and should see his scoring numbers rise.

He is already among the best shooters and isolation scorers in the country. His biggest concern during the offseason will be recovering from foot surgery that he underwent in early May. The injury provides some much needed rest, but could also hamper his ability to add strength and muscle. Making a smooth recovery from his stress fracture will be the first priority, but then LeVert can focus on expanding his game.

Last year he thrived as a scorer, but his ability to create for others lagged slightly behind. If LeVert is able to expand his ball screen distribution in a similar fashion to Stauskas did last season, his versatility will be hard to resist for NBA scouts.

LeVert put his name in to the NBA Draft Undergraduate Advisory Committee this year before opting to return for his junior year.

“There was definitely a time when I talked (about considering entering the draft) over with (the coaching staff) and my mom,” LeVert said at the Michigan Basketball banquet in April. “But, I mean, it was kind of an easy decision for me.”

If things go according to plan, his decision should next April should be just as easy.