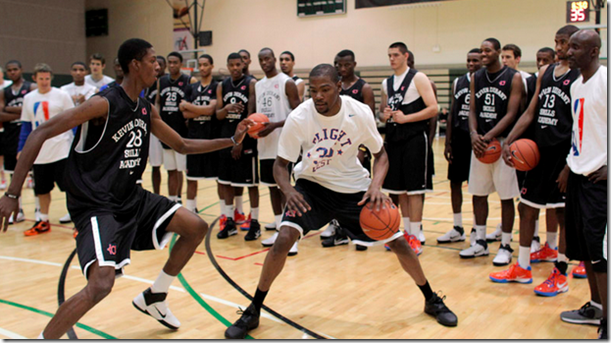 WASHINGTON, DC — AJ Turner’s favorite player growing up has been Kevin Durant, so when he learned he’d be playing with and against the NBA MVP at this past weekend’s Kevin Durant Skills Academy you can imagine the reaction.

“It’s unreal,” said Turner, a four-star small forward enrolled at the New Hampton School in New Hampshire. “He’s my favorite player and just being on the same court as him and playing against him, it’s really an honor.”

Turner was one of 31 high school players — 28 rising seniors and three rising juniors — invited to the three-day academy along with 15 college players to work on wing-player skills with Durant and other pros and coaches. Other Michigan targets Prince Ali, Esa Ahmad and V.J. King also participated in the event. King was a standout at the event despite being one of only three underclassmen in attendance and there’s still talk that King will try to visit Michigan this summer.

“It was really exciting,” Turner said. “I got to play with some of the best talent across the country and I had a lot of fun.”

Turner received an offer from Michigan State in May, and he hopes to gain Michigan’s interest during the July live evaluation period. He said he talks to John Beilein “from time to time” and expects the Wolverines to watch him at the Peach Jam and maybe in Las Vegas. The 6-foot-6 guard said that his list of schools remains long and there is no plan to cut it until he gets a chance after July to sit down with his parents.

While Ali and Ahmad sat out Sunday’s session of scrimmages, they took a lot away from the first two days of the academy that were heavy on drills and messages from the coaches about how to mentally succeed as a basketball player.

“It was a good experience because you get a lot of good instruction from a lot of guys who played in the league,” Ahmad said. “I just tried to soak everything in and try to apply it to my game.”

Added Ali: “I learned a lot. As a high school basketball player, we play kind of fast and I learned that when you get to the next level you have to slow down and really think the game.

“Also I learned to be a pro is pretty tough. You see what Kevin Durant is doing out there.”

The camp host was far from just a coach during the weekend. During the camp’s three sessions, Durant and a group of instructors jumped in during five-on-five 12-second possession games. It was a great opportunity for high school players to go head to head with the superstar — and receive a dose of humble pie in the process.

It was a busy weekend for Ahmad, who stopped at Maryland for a visit before the Durant Academy. The four-star forward from Shaker Heights, Ohio, then spent the non-basketball portion of the weekend rooming with Ohio State commit Austin Grandstaff, who wasn’t shy about pitching the Buckeyes to his roommate.

“Austin is a cool guy, but you know he’s trying to persuade me to get down to Ohio State again, visit, and try to get me to come there with him,” Ahmad said.

Ohio State, Maryland and West Virginia are entrenched in Ahmad’s recruitment and he plans to make his decision before school starts. However, he continued to mention that he wants to visit Michigan, “This coming month I’m trying to make a visit to Michigan and Michigan State.”

Ali, who UM Hoops profiled this past week, said again on Sunday how much he loves Michigan’s system and that he definitely will take a visit to Ann Arbor in the early fall.

“What I like about Michigan, I’ve seen Michigan play a lot — I love their style of play, I love their atmosphere, and I just think that’s a pretty good school,” Ali said.

The four-star guard who decommitted in May from Connecticut has drawn heavy interest from Michigan, Indiana, UCLA, Connecticut and Maryland heading into the live evaluation period. Ali attends the same high school — The Sagemont School in Weston, Fla. — as recent Indiana graduate Will Sheehey and said he plans to talk to Sheehey in the coming weeks.

“Coach Beilein, he’s pretty much selling me that he needs a guard in 2015 because (of potential early departures),” Ali said. “And that’s pretty much the same thing with UCLA. They need some scoring guards for 2015. I know Michigan, they develop their players. You see what Trey Burke and Tim Hardaway are able to do at Michigan. And the same thing at UCLA — they develop their players and they get them ready for the pros. They had three draft picks this year.”

But a lot of basketball is to be played before Ali, or Ahmad, or Turner, and especially King — who has received offers from Ohio State, Louisville, Arizona, Wisconsin and Georgetown, among others — make any decisions. All participants of the weekend’s academy are invited to July’s LeBron James Skills Academy in Las Vegas, and many will also participate in Atlanta’s Peach Jam EYBL Finals.

They left DC worn out from three days of learning from one of the world’s best players — and from competing against their peers.

“Overall, I loved the camp,” Ahmad said. “It was a great experience getting to play against the MVP of the league. It was really an honor.”