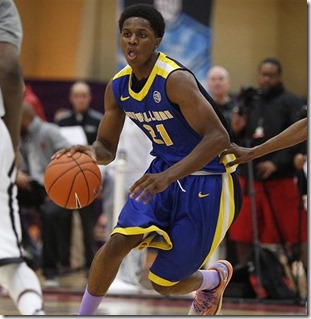 Michigan has continued to expand its class of 2015 recruiting board in recent days, expressing interest in a number of rising seniors before the July evaluation period begins in early July.

“(Coach Jordan) told me about how exciting things are (at Michigan) and how we are going to build a relationship,” Milton told UM Hoops.

Williams is being also being pursued by Indiana, Minnesota, George Mason, VCU, Memphis, North Carolina and others. ESPN named Williams one of the most improved players in the country after watching him at the Nike Ones Academy.

Williams is a prospect who played his way into the ESPN 100 by virtue of a breakout spring. Like Coleman, his ability to knock down the 3-ball is the foundation for his offensive game, but Williams is far more versatile than he’s given credit for. Actually it was his mid-range game that stood out here as he showed the same soft touch with a quick and high release to score in rhythm without the luxury of much space. He even made a couple of nice passes as a pick-and-roll ball-handler.

The July evaluation period starts on July 9th and will be a critical time for Michigan to evaluate its new targets in the 2015 class.

UM Hoops wasn’t able to make it to Michigan’s Team Camp over the weekend, but 2016 offerees Cassius Winston, Seth Towns and Jon Teske were all in attendance. 2015 forward Evan Boudreaux and Michigan State commitment Deyonta Davis were some other headliners at the event.

Cassius Winston continued his massive spring, and reportedly dominated another camp event. Winston excelled at Michigan’s College Practice Camp earlier this month and was reportedly excellent at the Nike Elite 100 event along with Oakland and Michigan State’s team camps. Winston should be poised to have a big July with The Family on the national circuit. Reports are that Seth Towns was much more impressive at Michigan’s Team Camp than he was at Elite Camp earlier this month.

Michigan has been working hard to get involved in Henry Ellenson’s recruitment. The five-star big man in the class of 2015 is one of the more versatile post players in the country and has been a fast riser this spring, adding offers from Duke, North Carolina and UCLA. Ellenson plans to trim his list in August.

Once a hidden gem in the Midwest, the 6-foot-10 power forward “blew up” and became the No. 17 player in the class of 2015, according to Rivals.com. He holds 19 offers, and most important, tried to list eight of the schools most involved in his recruitment. [He did not offer a top list.]

“I’ve been hearing from a lot, and I feel bad every time I say the names. I keep messing up,” he said. “But Northwestern, Michigan State, Wisconsin, Marquette, Duke, Michigan, UNC and UCLA.”

Unlike some top recruits, Ellenson seems more of the quiet type. He’s not giving any hints about his recruitment—with some speculating that Wisconsin will be difficult to beat.

“All those programs are big time,” Ellenson said. “It’s been a good process and hasn’t put too much pressure on me. It’s nice to hear from the programs and be able to talk to them.”

Ellenson will not set a specific date for when he trims his list, but said it would happen sometime in August.

Ellenson recently measured in a 6’10.5”, 231 pounds with a 7’2” wingspan at the Nike Big Man Academy. ESPN raved about his performance at the event.

No player has made a more dramatic climb up the rankings this spring than Ellenson, and he continued to show well this week. First, his energy level and motor stood out from the get-go and was a consistent factor in competition and skill work alike. While he can stretch opposing defenses to the arc, he was incredibly consistent in the 15- to 18-foot range, while also being active and effective around the rim and changing ends of the floor to be a true 3-range scoring threat.