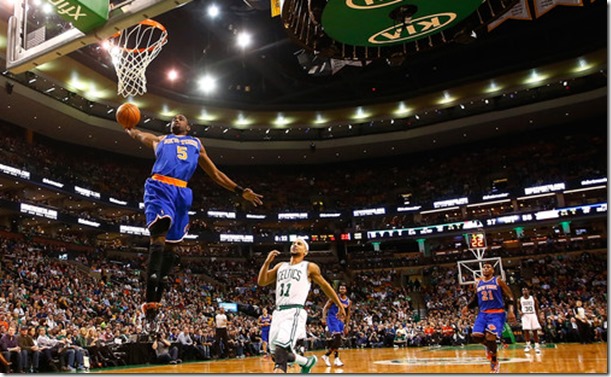 “Rookie Recap” is UM Hoops’ in-depth look at the debut NBA season for Michigan’s 2013 NBA draft picks, Trey Burke and Tim Hardaway Jr.. We’ll recap the rookie season of both players as well as look to the future both from a team and individual perspective.

Tim Hardaway Jr. snuck into the first round of the 2013 NBA Draft and never looked back.

The New York Knicks selected Hardaway with the 24th pick in the NBA Draft and he finished the year on the NBA All-Rookie First Team and was fifth in Rookie of the Year voting.

In many ways, the draft played out perfectly for Hardaway. He ended up on a team with plenty of opportunity, but he also had veterans and a support system around him. The Knicks season didn’t go well — they finished 37-45  — but Hardaway’s season was certainly a success on an individual level.

“I think I’m one of the lucky ones out of the draft,” Hardaway told Knicks.com “Just to have all these All-Star guys on the same team and just to see everyone try to help me out each and every day to get better as a player and as a person off the court.”

For the most part, Hardaway did what he does best and little else: shoot threes and attack the rim in transition. Playing 23 minutes per game for the Knicks, Hardaway was able to serve as a scoring specialist off the bench and didn’t do much in the way of creating for others or crashing the glass. Hardaway made three or more 3-pointers in 17 different games as a rookie and his 36.3% three-point shooting was just a percentage point below his junior percentage at Michigan, despite the longer three-point line.

Hardaway’s transition play was a massive boost to his production. He scored 1.31 points per possession in transition, good for the 86th percentile in the NBA according to Synergy Sports. Hardaway was an elite transition player during his junior year at Michigan, so it’s not surprising that he’s still racking up the transition dunks and wing threes on the break.

Hardaway was also very efficient using ball screens with the Knicks. That element of his game was most prevalent during his freshman year at Michigan, but he’s always had that wrinkle up his sleeve. Hardaway ran 106 ball screens last year, creating 107 points. His 1.009 points per possession grade out favorably against the rest of the league. Among players that ran at least 100 ball screens, Hardaway ranked 15th in efficiency.

Mike Woodson is out as head coach and Phil Jackson is in as president. His first move was to hire Derek Fisher as his head coach. Carmelo Anthony opted out of his final year and will test the market in free agency. While Melo could re-sign in New York, teams like Chicago and Houston are pursuing him and there’s a legitimate chance he’ll be gone from the Big Apple.

The off season news won’t stop in the front office. The Knicks already shipped out Tyson Chandler and Raymond Felton in exchange for Sam Dalembert, Jose Calderon, Wayne Ellington and Shane Larkin. Iman Shumper has also been rumored to be on the trading block. Despite the roster turnover, Hardaway is still expected to be a critical part of the Knicks’ future.

Zach Lowe examined how the Knicks would look in the triangle offense and had this to say on Hardaway:

The rest of the roster is an awkward triangle fit. Jackson loves big guards, and though neither Tim Hardaway Jr. nor Shumpert is especially huge, both are rangy. Hardaway needs to learn NBA-level defense rather urgently, and every player in the triangle must be able to dribble, pass, and cut in at a level he hasn’t yet shown in a promising rookie year.

Hardaway was widely regarded as one of the lone bright spots to an otherwise disappointing season, but like any rookie there’s plenty to build on going forward. Criticism among Knicks fans should sound familiar to Michigan fans that have watched Hardaway . The Knicks hope that the 6-foot-5 guard can improve defensively, on the glass and in the assist column, but realize that he hit key shot after key shot off the bench.

Hardaway isn’t settling for a good rookie season either.

“I still have a chip on my shoulder each and every day I play against the guys that got picked before me, “ Hardaway told Knicks.com.

With one year in the books professionally, Hardaway is sticking to the same mantra that Michigan head coach John Beilein taught him in Ann Arbor.

“I learned even though you have ups and downs, you can’t fall back on them and you have to keep on moving on,” Hardaway told KnicksNow.com after the final game of his rookie year. “(You have to) move on to the next game, move onto the next play, move onto the next possession and I think I did that very well thanks to the veterans helping me out the whole entire way.”

Hardaway admitted that his first year in the league was frustrating after missing out on the playoffs and finishing with a losing record. He’ll be focused this season on rounding out his game, especially on the defensive end of the floor.

“I just want to get stronger to be able to play defense a lot better,” he said, “I feel that was a weakness in my game, I want to handle the ball a little bit more and just make sure I go out there and rebound and bang with the guys a little bit and just all around be a better basketball player.”

Hardaway’s best showing in a real game was a 29 point performance in a blowout win over the Cleveland Cavaliers where he knocked down six threes.

But perhaps his most memorable moment was probably his showdown with Dion Waiters in the Rising Stars game. Hardaway scored 36 points on 12-of-23 shooting (7-of-16 from deep) to Waiters’ 31 and put on a show for the All-Star Weekend crowd.