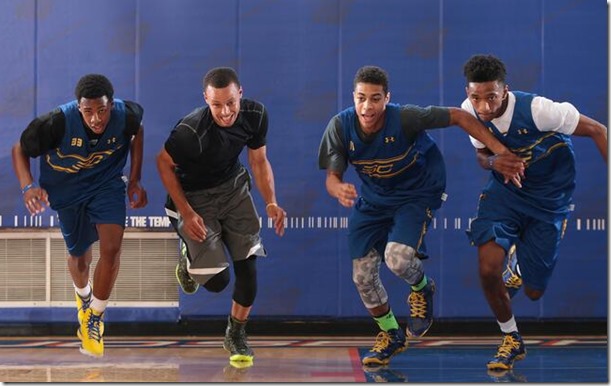 Derryck Thronton Jr. has impressed across the country this spring, dominating multiple camp events over the last month. He was a star at Michigan’s College Practice Camp and followed that up by showing out at the NBPA Top 100 Camp. Most recently, he attended Steph Curry’s 30 Select Camp and left with the Most Valuable Player award.

Scout.com raved about Thornton’s play at the event.

“Derryck’s competitiveness and his will to win, you just see it in all the drills we’ve done,” Curry told Scout.com. “He’s pretty explosive for a guy his size. He showed obviously in this session he could shoot the ball. He competes on both ends. He’s a guy that I think has stood out in camp in all aspects of what we are trying to do.”

Thornton played with supreme confidence at the camp. His ball skills particularly stood out here, as a premium was placed on drill work. Thornton is a crafty ball handler with very good footwork.

Thornton sought out competition and constantly tried to match up and defend Stephen Curry. He even blew by him for a lay up during a one on one drill.

Thornton’s big summer could accelerate even faster when the live evaluation period begins in July. Thirsty to improve his game, Steph Curry’s camp was a good experience for Thornton.

“We’ve done a lot of drills, Steph is really hands on so he’s leading us and breaking everything down for us,” Curry Told Point Guard U. “Learning from all these great basketball minds, it’s a great experience,” he added. “I love everything about it. It’s a really good opportunity to get better.”

Tyus Battle also had a big weekend at Steph Curry’s camp. He earned praise from Scout.com as well.

Battle’s ability to handle the ball and his consistency from mid-range were the big takeaways from his game at the Stephen Curry Select Camp. At 6-foot-6, Battle is skilled. He showed he could handle the ball in tight spaces and make plays off the dribble. He has good form on his shot and may have been the best mid-range shooter in the camp. His range extends to three and during one session made four threes during four on four action. Battle is tracking as one of the best wings in the 2016 class.

Battle has drawn recent increased attention from both Duke and Florida.

“I talked to both Jon Scheyer and Coach Donovan today,” Battle’s father, Gary, said. “They are going to see him at Reebok in July and they had seen some things online that he was doing well at the camp. They’re really going to recruit him and make him a priority.”

ESPN’s Fran Fraschilla also tweeted about Battle. “I swear Tyus Battle will be a college Kawhi Leonard,” he tweeted. “Has left it all out on court Under Armour Steph Curry Select Camp. HIGH motor guy!”

Rivals.com updated its top-100 earlier this week and a number of Michigan prospects saw their stock rise. Derryck Thornton Jr. moved up to No. 11 overall in the country while TJ Leaf checks in next at No. 20. Tyus Battle (25), Cassius winston (35) and Quentin Goodin (59) weren’t far behind. Seth Towns and Jon Teske didn’t make the Top 100.

Jamal Murray is trying out for Canada’s Cadet National Team and North Pole Hoops put together this dunk video of Murray after a practice.

Murray made the cut to 14 and will attend training camp in July before the 17U FIBA Worl Championships in Dubai.