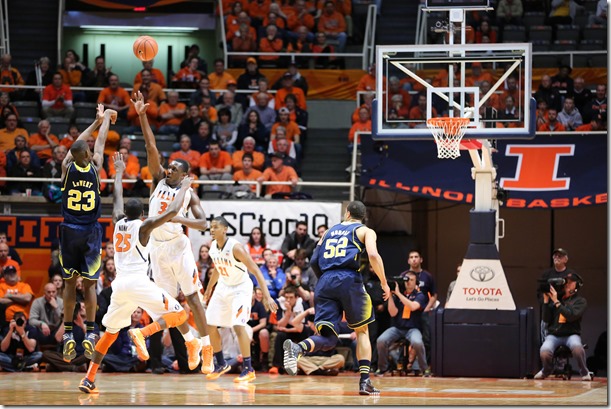 John Beilein’s famous two-guard offense is still alive and well in Ann Arbor, but it’s been supplemented and upgraded by the pick-and-roll. When Beilein took over in Ann Arbor, he implemented his traditional offense. The backdoor cuts, crisp passing, spacing and funky terminology that define Beilein Ball are all still present, but the upgrade has been dramatic.

Over the last four years, Michigan’s growth as a program accelerated from steady to exponential. The Wolverines went from perennial bubble team, to perennial contender and have become one of the most consistent programs in the Big Ten — seemingly overnight. The ascension can be attributed to a number of different things, but the high ball screen is at the foundation of what Michigan does best.

The first year that Beilein coached Michigan to the NCAA tournament was 2009. The Wolverines went 21-14 and finished the season with the 43rd best offense in the country. Michigan had some stars, but it was still running predominantly the two-guard offense.During that season, just 4.6% of Michigan’s offensive possessions were ball screens. The Wolverines scored .802 points per ball screen (including passes), good for just the 41st percentile nationally. In 2010, Michigan flamed out spectacularly. The Wolverines finished 15-17 and ran a few more ball screens, but were still relatively inefficient.

Beilein and his new staff were left with a problem: the best player on the roster was a 6-foot-4 guard that couldn’t shoot. The rest of the roster was comprised of five freshmen and two juniors with limited offensive skill sets. Morris needed the ball in his hands because if he didn’t have it, he might never get it. He wasn’t a great fit for the two-guard offense so Beilein did what great coaches do, he adapted.

“You adapt to your personnel. We always have,” Beilein said at the 2013 final Four. “You try to morph our offense and our defense to the personnel that we have.”

Beilein might have been adapting to an otherwise limited roster in 2011, but he’s never looked back. The ball screen never left.

The influence of a new assistant coaching staff also pushed along the ball screen game. Former Butler guard LaVall Jordan is the maestro responsible for teaching Michigan’s guards how to properly utilize the ball screen. Jordan works hand in hand with Michigan’s guards and it seems that every primary ball handler has ended up in New York City come June over the last several years.

Michigan has dialed up more ball screens in each successive season since 2011 and now uses three times as many pick-and-rolls as it did during the 2010 season. What was once an afterthought in Beilein’s offensive blend makes up nearly a third of Michigan’s offense.

Despite queuing up more and more ball screens, the Wolverine offense keeps getting better. Michigan’s offense has climbed from 97th to 35th to 19th to 1st and then 1st again. The Wolverines scored an adjusted 124.1 points per 100 possessions last season (per KenPom), giving them the best offense in the Ken Pomeroy (2002-2014) era.

There’s no secret to Michigan’s success: the high ball screen.

It’s difficult to quantify just how effective Michigan’s high ball screen offense has been relative to the rest of the country. Michigan has had the best offense in the country for two years running, so it grades out favorably in most measures, but the ball screen superiority becomes clear when scatterplotting two seasons worth of ball screen offenses based on their percentage of a team’s offense (x-axis) and the points scored per ball screen (y-axis) (click to enlarge).

Michigan is firmly in the proficient upper-right quadrant of the graph. There are a few outliers, but the Wolverines have been one of the best very best ball screen offenses in each of the past two seasons.

The trend of the game

College basketball is great because it has a wide range of offensive and defensive styles. With so many schools and levels of competition, there’s obviously fluctuation in how teams succeed. It’s why so many of us love the game, but it also tends to mask the cutting edge progression of basketball in general. That’s a big reason that John Beilein and his staff spend so much time watching NBA film in the offseason.

NBA teams that stick to their ways generally get left behind. When something works, everyone in the league is either doing it or losing. The ball screen qualifies in that regard. 31% of the average NBA team’s offense consists of high ball screen sets and there are only two teams running fewer than 25% of their offense through the ball screen (the 19-62 Philadelphia 76ers ran the fewest ball screens in the league last season). Unlike the scatterplot above, while some NBA teams are better than other are actually scoring, almost all NBA teams run a large chunk of ball screens.

The NBA is where the game advances first and the ball screen is no different. In 2011, the average NBA team ran pick and rolls on just 23% of their offensive possessions. College basketball has seen a similar progression as the Division I average has moved from 12.1% to 19.3% since 2010.

Michigan’s rise to offensive greatness has also been helped along by several NBA Draft picks. Trey Burke and Tim Hardaway Jr. both hit the ground running in the NBA last season. Nik Stauskas was selected eighth, mostly because of his ability to not just shoot the ball, but play in the high ball screen game.

“The way coach (John) Beilein and the coaching staff runs their system at Michigan, it’s a lot of ball-screen offense, and I think that’s where the NBA’s headed,” Stauskas said after being drafted. “That’s where I got a lot of my work done this year, in those areas.

Michigan’s cast of ball screen players helps illustrate just what a versatile weapon the ball screen has become. Over the past four seasons, Michigan’s ball screen wizards have come in all shapes, sizes and styles of play.

Trey Burke was the most spectacular. Standing just 6-foot and change, Burke could shoot, drive or pass off the ball screen to perfection. His ability to find his teammates in residual action (cuts to the rim or spot up shooters) made him in even more dangerous and helped the make up for his lack of height in finding the roll man.

Morris didn’t have the jumpshot, but he had the size and passing ability. Morris passed the ball on 47% of his ball screen possessions and Michigan scored 1.25 points per play in those situations. He was actually just as effective as Burke in ball screen situations.

Stauskas and LeVert added yet another element. While neither player was Michigan’s point guard, both ran more ball screens than Morris did just three years earlier. Stauskas was the most efficient ball screen player Michigan has had,  while LeVert grew into the ball screen game as the season progressed.

Nik Stauskas is gone, but perhaps more importantly so is Jordan Morgan. Morgan has been the reliable punctuation at the end of so many high ball screens over the last four years. Last year, Morgan shot 80% when he was rolling to the basket. He was the constant through Morris in 2011, Burke in 2012 and 2013 and Stauskas in 2014. While the roll man is certainly the least glamorous part of the pick-and-roll, Morgan provided the sort of reliability that goes unnoticed yet is so vitally important.

Michigan’s roll and-pop players scored 138 points last season and 133 of them are off the board due to transfer, graduation or the NBA. John Beilein will be relying predominantly on freshmen as his roll players in 2014-15. While that might make for a less reliable option, it could also result in more versatility.

Mark Donnal, Ricky Doyle, DJ Wilson and Max Bielfeldt should be Michigan’s primary ball screeners next season. Doyle projects similarly to Morgan, he has the frame to set solid screens and roll to the basket. However, the other options could be more versatile. Both Donnal and Wilson both should be pick-and-pop threats, touting reliable three-point strokes in high school, and even Bielfeldt is reported to have a reliable jumper.

That versatility could help open up the lane for Caris LeVert, Derrick Walton and even Zak Irvin to emerge as bigger scorers in the paint in 2015.

While Michigan might add more wrinkles, don’t expect the game plan to change. The high ball screen might have started as an adjustment, but it’s not going anywhere any time soon. The Wolverine’s success in 2015 will depend on how quickly Caris LeVert and Derrick Walton can takeover the reins to Michigan’s ball screen game.

Data from KenPom.com and Synergy Sports.