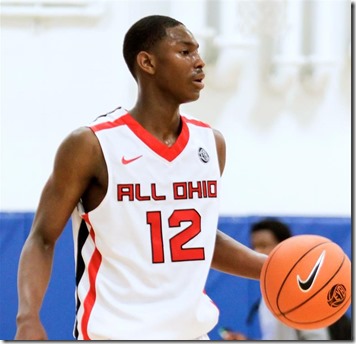 The July live evaluation period tips off on Wednesday and college coaches will have three long weekends to evaluate prospects after being allowed just three days in April. Recruiting stock will rise or fall rapidly as college coaches hit the circuit. The biggest events this summer include the LeBron James Skills Academy, Nike Peach Jam, Reebok Breakout Classic, adidas Unrivaled Top 100 Camp and the adidas Super 64 in Las Vegas. Michigan coaches will be on the road tracking their offered prospects, but also looking for new under the radar targets.

Michigan will track four new wing prospects this July that emerged on the radar in May: Prince Ali, Kenny Williams, Matt Ryan and Shake Milton.

Ali, Williams and Milton all play on the Nike EYBL circuit and should be at both the LeBron James Skills Academy and the Nike Peach Jam. Both events should give John Beilein and his staff a good chance to evaluate them against top notch competition.

Matt Ryan is still recovering from hip surgery, but is hoping to return for the AAU Nationals at the end of the July evaluation period. Expect Michigan to pay close attention to Ryan at the event to see how he’s recovered from his hip surgery.

2. Searching for the unknown

Last summer, DJ Wilson and Donte Grantham were barely on Michigan’s recruiting radar and ended up being two of the Wolverines’ top targets by August. The names at the top of the board in June don’t usually match the board in August. Wilson ended up committing on his official visit in September and is one of the gems of Michigan’s incoming class.

Michigan’s top priorities for the class of 2015 appear to be a shooting guard and possibly an impact big man. John Beilein and his staff have identified a number of guards, evident above, but there aren’t many post players on the board. With three weeks of first hand evaluation ahead, don’t be surprised to see new recruiting targets pop up before August.

With ten outstanding scholarship offers, Michigan’s recruiting could be stretched during the evaluation. Pay close attention to who Michigan is following closely and who John Beilein and Michigan’s staff spend the most time watching.

Coleman has been one of the top prospects on Michigan’s recruiting board for over a year and the Wolverines still appear to be firmly in the mix for his services. Coleman’s summer will start at the high profile Nike events with the LeBron James Skills Academy in Las Vegas and the Peach Jam in Augusta.

Thornton, Leaf and Battle are all top-20 level prospects with legitimate mutual interest. Expect John Beilein or an assistant to be at most games that they play, but also expect their national interest to rise quickly.

Thornton has risen nationally in the past month, adding offers from Michigan, Kentucky and Florida and dominating the NBPA Top 100 and Steph Curry Select 30 Camps. He is now ranked as high as eighth nationally and is in the debate for top point guard in the country. Thornton will participate in the Reebok Breakout Camp to open the evaluation period.

Michigan’s attention won’t be far behind tracking Cassius Winston, Quentin Goodin and other offerees in the 2016 class.

4. Towns and Teske ready to emerge

July will be a big month for 2016 offers Seth Towns and Jon Teske. Both players earned Michigan scholarships on June 15th, but haven’t received a lot of national media or recruiting attention. Towns is a silky smooth shooter that has been very good this spring, but hasn’t played at high profile Nike and Adidas events. He should have a big opportunity during the first week of the evaluation period at the Reebok Breakout Camp in Philadelphia.

Teske has offers from Michigan and Ohio State, but missed most of the spring with an injury. He’s healthy again – reportedly playing very well at Michigan’s Team Camp – and should be poised to rise in the recruiting rankings. Teske has the size and shot blocking ability to make an impact at the next level and that should become obvious to national media this July.

A big summer could see Towns and Teske with a handful of additional offers and a place on most top-100 rankings nationally.

Michigan has already extended an unusually high seven offers in the class of 2016, but there’s always the possibility of new prospects playing themselves onto the radar. Devearl Ramsey, Jamal Murray and Josh Langford all appear likely to visit in the late summer or fall and could be in line for an offer, but players like Eron Gordon, Matthew Moyer and Kyle Guy could emerge as offer candidates with big performances.