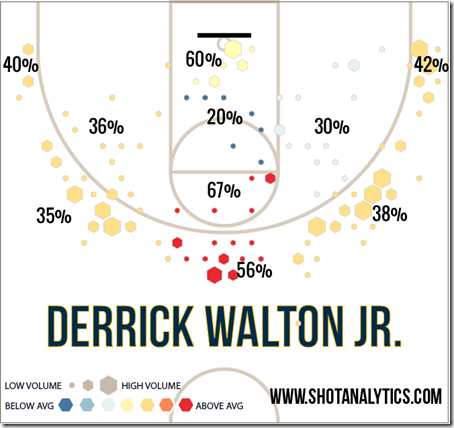 Derrick Walton faced decidedly unrealistic expectations when he first stepped on the floor at the Crisler Center.

Walton was the highest rated point guard that John Beilein had recruited to Michigan. The two point guards before him were Darius Morris and Trey Burke – both of whom had left for the NBA after their sophomore seasons. Walton was expected to keep the momentum going after Burke had led Michigan to the National Championship Game and left Ann Arbor with a trophy case full of National Player of the Year awards.

With so many other talented pieces returning, Walton was supposed to step in and steer the ship seamlessly. The chances of accomplishing that feat were never likely, but Walton started from day one and helped Michigan to a Big Ten Championship and ended up on the All-Big Ten Freshman Team. Not a bad start to say the least.

Walton wasn’t Burke and he wasn’t Morris, but he quickly figured out that he didn’t need to be and meshed with the talented roster. Serving more as a peripheral shooter than the focal point of the offense, Walton put together a strong freshman season.

Shining Moment: Walton had a handful of big plays as a freshman, but his layup with the foul in East Lansing was the top moment of his season. The layup helped secure Michigan’s win at the Breslin Center, something that means just a little bit more for an in-state prospect.

Quotable: “The proverbial coach‑speak, the game has slowed down.  And in particular some things that as we make adjustments during the season.  When he was starting to get it, right now, somebody plays us a certain way and now everybody sees that on video and now we gotta change. And we keep changing and changing and changing, and he’s gotta stay up with those changes.  A lot of times when you’re not the quarterback of the team, those changes aren’t as obvious to you.

And for him, for him to keep just growing his game and seeing this has just been fantastic.  He’s really a bright kid.  I love that he’s starting to call plays on his own.  And as a freshman, right now he’s every bit as aware of what the mission of a game is for us, what the game plan is as anybody we’ve had.” – John Beilein on Derrick Walton’s freshman year development.

Walton couldn’t have done much more last season and would receive an ‘A’ if we were grading on a freshman curve. But the picture will be different in 2014-15. Walton is in a position to make a Stauskas-like jump in his sophomore season. He played the 4th option role on a great team perfectly, but now he’ll have to transition into the No. 2 role.

Walton has the legitimate opportunity to grow into a Yogi Ferrell-type player for Michigan. Ferrell averaged 7.6 points and 4.1 assists as a freshman before seeing those numbers skyrocket to 17.2 points and 3.9 assists as a sophomore. Walton will have a better supporting cast than Ferrell last season, but will need to make a similar leap. He has the jump shot and he’s played in big games and an uptick in opportunities could result in Walton posting big scoring numbers as a sophomore. With his quickness and scoring ability, and the track record of other Wolverines’ making rapid improvements, there’s no reason for Walton not to improving significantly in 2015.